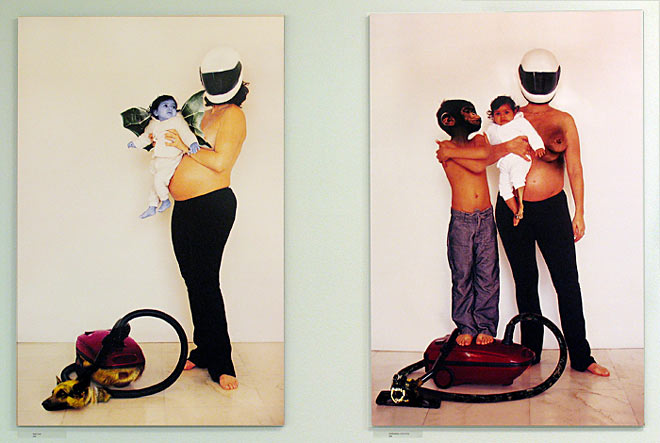 In the series of "Islamic Worlds", the ifa-Galleries Stuttgart and Berlin present the exhibition "Layers of Time and Space", developed in collaboration with the Austrian curator Simone Wille. It will show artists from Pakistan, India and Bangladesh. Some of the artists live in South Asia, others in Europe or America. Their common goal in their artistic work is to tackle the changes in their respective social realities in various ways. On the one hand, this reality is characterised by upholding traditional values, on the other hand by the tendency towards Western, American products, habits, and possibly even values. The invited artists have crossed political, cultural and religious borders within their own society as well as beyond it, some of them have broken taboos in order to develop their individual strategies and artistic means of expression viable for a life between tradition, conventions and an international idiom. Since the young generation of artists from the 1980s and 1990s had not been confronted with the personal experience of colonialism, the search for a national and cultural identity is less problematic for them as for the older generation.

Many younger artists from Pakistan, India or Bangladesh orient themselves by the international art scene as a matter of course, coping with a language of form or contents that are being discussed worldwide. However, they bring these global questions in relation to their own, rich and newly discovered culture. This culture as well as questions of religious and ethnical identity are being spotlighted critically.

The exhibition "Layers of Time and Space" presents a refreshing survey of contemporary art from South Asia, which deals with the found patterns and traditions in a self-confident manner and which realises new, intercultural perspectives in the creative process. It invites us to call common stereotypes into question and to reconsider our own perspectives on other cultures and religions.

Hamra Abbas
* 1976 Kuwait. Lives in Berlin, Germany, and Lahore, Pakistan.
"MoMA is the Star", by Hamra Abbas is based on the footage made outside the New National Gallery, Berlin on the last day of the exhibition "MoMA in Berlin: the art event of 2004". Through the eye of the camera Abbas observes silently how the power and glory of one of the worlds premier arts institutions attracts spectators in Berlin to line up for hours to view this great collection of modern art. This work is to represent in artistic terms the "plurality of vision" of East and West, insider and outsider. Yet while the artist’s camera oscillates between the waiting crowd and footage of MoMA’s commercial self representation Abbas comments on cultural hegemony.

Sarnath Banerjee
* 1972 Calcutta, India. Lives in New Delhi, India.
Sarnath Banerjee’s comics, his graphical novels and animations deal with fragmented realities in the cities of the subcontinent; they bring the past and the present in relation, in order to examine stereotypes, myths and morality in post-colonial India. The exhibition "Layers of Time and Space" will present animations and the original drawings to "Corridor". When he published his first comic novel "Corridor" in 2004, it immediately attracted the attention of the Indian media. In "Corridor", the author takes the readers along on a journey through fragile post-colonial spaces in the metropolises New Delhi and Calcutta that are almost unknown in the West. With his works, Sarnath Banerjee procures the comic book, which is traditionally characterized as humorous, full of action and fantasy, a position as a legitimate literary medium.

Naiza Khan
* 1968 Karachi, Pakistan; lives there.
A recurrent aspect in Naiza Khans artistic work has become the personal outcry not only against clichés and taboos but also against expectations that the artist is being confronted by living and working in the Muslim world. Elements like lingerie and medieval chastity belts imply the emotional physiognomy of the body. With the absence of the body their isolation assumes a fetishistic nature.

Bharti Kher
* 1969 London, Great Britain. Lives in New Delhi, India.
Like many other contemporary Indian artists, Bharti Kher reflects a modern, indeed post-modern sensibility - a world where concepts like "authenticity" rarely come without quote marks, and where globalization has rendered national borders highly permeable to products, ideas and images. Kher’s work often plays with everyday scenes and objects. These works on display at the ifa-Gallery Berlin showcases a complex set of creatures, who question our notions of race, identity, origin and convention.

Shahzia Sikander
* 1969 Lahore, Pakistan. Lives in New York, USA.
The New York-based Pakistani artist Shahzia Sikander works with traditional as well as contemporary techniques: The various miniature painting schools of the Indian subcontinent which she refers to are being deconstructed and reassembled layer by layer. In this manner, she creates a virtual space, which opens up a room for questions of identity. The title of the DVD animation "Pursuit Curve" refers to the mathematical function describing the path that is followed by an object chasing another object. The pursuer, however, will never seize its prey on the curve of pursuit. "Pursuit Curve" speaks of a possible different reality that is located outside the post-colonial discourse and theories of modernity dominated by Western institutions.

Farhana Syeda
* 1972 Khulna, Bangladesh. Lives in Dhaka, Bangladesh.
In her poetic photo reportages, Farhana Syeda documents the problems of Muslim migrants from Bangladesh in the slums of Delhi and Calcutta. She responds to an international, based photo journalism that is thirsting for sensational images of starvation and catastrophes in her home country Bangladesh. She created the "Dilliwale Project", which deals with the different forms of migration, hierarchies and urban fragmentation. "Dilliwale Kaun" means "lawful citizen of Delhi", hence exactly that, which the illegal, poor Muslim immigrant from Bangladesh will never be. The reportage conveys the impression of uprooting, exclusion, social barriers and religious refuge.

(Press release of the ifa)