Suha Shoman: Of Time and Light

Of Time and Light. Video installations and other aspects of the artist's work. 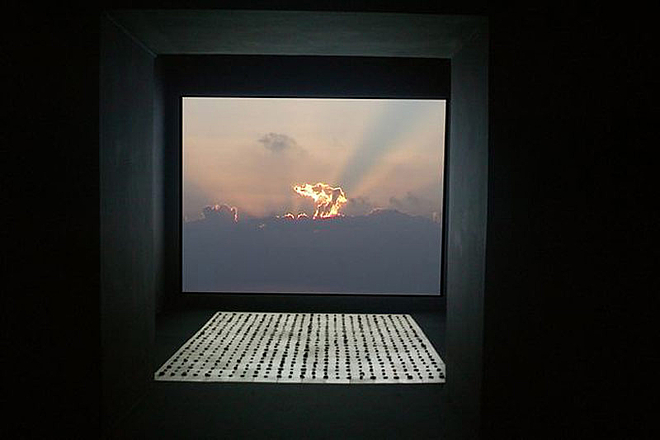 Suha Shoman's labor of love is just that - the search for herself, for spiritual oneness with the loved one, for light at the end of the passage through life's journey.

Her material representation of such an unlikely task is as original as it is daunting: an installation full of symbolism and an exhibition crowning over 20 years in the life of an accomplished painter.

"Of Time and Light" captures both: time, from her earliest, more realistic paintings to the latest, abstract, almost monumental, canvases astonishing in their array of color and masterful use of sand; light, through imaginative, novel film projections ingeniously making use of light and darkness, symbolically suggesting superimposed cycles of life - from the beginning of creation to darkness; from the inception of life to departure, from early awareness and search for life's mysteries to wise realization and, ultimately the fulfillment of the quest for truth.

A lifetime in search of the meaning of life and death flashes by, showing the viewer the creation of an artist celebrating life, bowing to eternity, continuously looking for meaning, interpreting things with the superior understanding only artists have and subtly "diffusing" the message: life is eternal, we are fleeting embodiments of it, perpetually transformed and metamorphosed, never really "disappearing'; assuming different dimensions, living forever.

At the Darat Al Funun [1], the Blue House accommodates Suha Shoman's paintings. They are more of a series of works than of "phases" in the creator's artistic development.

Throughout her life as an artist, Suha Shoman, at times perhaps unaware, used matter to express her spiritual search for immortality. inspired, easily dabbing brushes of color to create space and depth, extraordinary compositions that constantly seem to have as a motif the rock, symbol of eternity.

Whether rock formations by the sea, a procession of women or, simply, the Nabataean city hewn in mountain rock, this symbol of eternity is ever present in Suha Shoman's artistic renditions.

On the other hand, down in the Darat Al Funun, still making powerful use of symbols, water, the giver of life, is ever present. Giving it depth and, again, hinting at life cycles, light shimmers over the body of water, infinitesimal atoms first, like in the primeval soup from which life sprung, flickering gold later. In the prime of life, and assuming a starry appearance last, at dusk, the sunset of life.

The patient filming of the metamorphosis of light points to a tendency to introspection, deep meditation on life and its course, a desire to fuse and commune with nature and penetrate its secrets. It reveals the artist's spiritual preoccupation and the original way of expressing it.

Taking it all in and forced to meditate on life and its path, in the next room the viewer is confronted with even more powerful symbolism. After dealing with life and eternity, with metaphysical thought and the idea of eternity, one is faced with religious, or perhaps mythical, impressions, hinting at life choices - the road taken in life - and the cross we all have to carry.

Like a stubborn ant following a present route, the silhouette resolutely making its way up the hill on a winding path, that of Suha Shoman herself, is taking the road "somewhere, anywhere, elsewhere"

Filmed at different times of the year, the summer of one's life and the winter pointing to an end, the walk is syncopated by a breathing pattern whose medical diagram is displayed on the wall, following the viewer's move and synchronized with the steps in the film. The labored breathing accompanies the strenuous walk, keeping company bringing life to the silent march towards the peak.

Carefully watching the unwavering procession of the walking figure will inevitably lead to thinking. Where? Why? Where does it start? Where will it end? Does it really ever end? What makes us choose a certain path in life? And what do we search along this path? Do we follow it towards an end and to the end? Would we choose it even if we knew where it leads?

Suddenly the more philosophical thoughts give way to down-to-earth reflections on man, mortality, futility, or otherwise, of living. And, again, the cycles of life are brought to us, beginning and end or, perhaps, not the end but a morphed life, one we all strive to attain.

Perhaps to prove that life doesn't really ever get extinguished, and to move to more uplifting levels, the next installation is a projection of flying birds, their, at times, erratic movement similar to that of the fragments of light in the first room, lively, busy, full of life and moving in... circles. Life, again, goes around, as the birds filmed from the early hours of the morning until dark, from the whole flock to a last, lonely, bird vanishing from the dark blue sky into the unknown.

Again incorporating high-tech elements in this spiritual space, unique footage of natural phenomena captured on digital camera is projected, enlarged, in the same room. Leading to the images are rows of pebbles lined like soldiers, like huge photo resolution points or like rosary beads (depending on how one looks at things, but all the more intriguing in their capacity to unify the whole concept of the classic/modern exhibition).

Somehow reminiscent of a ritualistic worshipping altar, the soothing, parallel lines (or maybe lives or lanes), mineral stippling that contrasts with the amorphous clouds and mountain ridges of the images projected, manage, at the same time, to calm and bring some order to the soul stirred by the assailing images.

The imagery is a work of art in itself. Sun and clouds (isn't life made up of both?) are intertwined. Clouds chase one after another, the sun appears from behind them; the ridges of Petra mountains are reflected ruggedly against the horizon. The whole multimedia projection is a continuous showing of life's cycle from sunrise to sunset.

Another cycle. And life brought full circle, like the work of this artist of amazing talent and pioneering thought.

Editor of the opinion and features pages at the English daily newspaper The Jordan Times.

Suha Shoman:
Of Time and Light 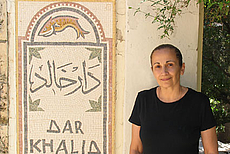