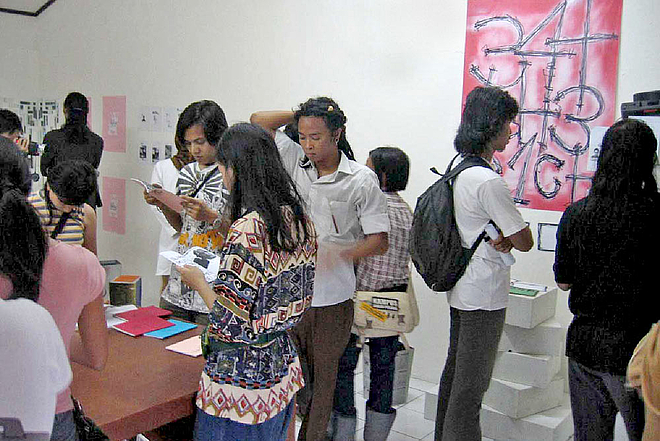 Hendro Wiyanto: Five years ago, more precisely in January 2000, you and several colleagues in Jakarta announced the founding of the "ruangrupa". What did you regard as the greatest necessity at that time?

Ade Darmawan: The necessity for a "space", physically and mentally. Discussions among the founders (Ade Darmawan, Hafiz, Lilia Nursita, Oky Arfie, Rithmi, Ronny Agustinus, and Ade Tanesia) about this necessity actually had taken place a year earlier. The discussions usually were about the need for space where artists could work intensively and could direct their attention more to means of analysis and less to means of production. We have seen that this is the only way in which visual art can possess a critical sensibility, and that is the important position of art in society.
We thought there needed to be a "space" that conveyed the ideas of visual art, which are very important to analyze, mediate, and furnish, like public art, performance art, and video art. These are results of today’s cultural development and visual strategies that are employed in the debate about and the investigation of social, cultural, and political phenomena.

H. Wiyanto: "ruangrupa" – in lower case letters – thus, you mention, wants to activate art in the broader cultural environment. What kind of culture do you actually mean with this term?

A. Darmawan: The culture that stands in significant relation to today’s or the current life reality. We see visual art as the practice of culture. How can visual art be located in the same relevant idea "spaces" as today’s socio-cultural problems? Since we are in Jakarta, the most obvious urban problems are in view. Various subjects arise in the art projects and workshops: printed matter as a product of urban culture, public space, residential settlements, photography and social context, the propaganda of the municipal government, transport, and other things.

H. Wiyanto: How do you bring into your events the discourses and practice of visual art that are tied to the cultural environment?

A. Darmawan: Discussions, brainstorming, and certain ideas usually begin with the social and cultural phenomena or problems. "Shape" is a strategy of expression or communication. Or, vice versa, we see visual phenomena as socio-cultural phenomena and always include our minimal research in it, and then we attempt to open this up with questions and playfulness.

H. Wiyanto: You also publish "Karbon", an art journal that appears every 3-4 months and whose themes are related to public problems. Is the public and publicity the main discourse developing in "ruangrupa"?

A. Darmawan: We publish "Karbon" to compensate for the lack of critical analyses of visual art and of its relationship to the socio-cultural context. Yes, public affairs are the main theme developing in "ruangrupa". The artist should no longer position himself as a "prophet" or "healer", as the center of consciousness and master of a language that is not that of the broad public or understood by it. We see the relationship to the public sphere more horizontally, as more permeable in both directions, and not distanced; we see ourselves more in the position of a collaborator than as furnishers, negotiators, or mediators. With this viewpoint, we have no difficulties entering the "real" world of everyday life as a main component of the work (art). This means as a component of the work on a mural on an overpass, in video screening at techno events, in discussions with students in Jakarta about the problems of artist’s training and the propaganda strategies of the municipal government, and even in silkscreen workshops with groups of street artists on the outskirts of the city.

H. Wiyanto: The usual circle of visual artists in Indonesia doesn’t really know that much about you. Perhaps they have heard "ruangrupa" at some point, but they don’t know what you are concerned with or how you work. I’m not even sure whether many know or read "Karbon" or come to your events. You seem to be better known outside of than within your own surroundings.

A. Darmawan: Oh, you are wrong about that.... Perhaps it is overgeneralizing to say that the circle of artists does not know "ruangrupa", and all the less can we speak about the circle of visual artists throughout Indonesia. For example, do we know much about the circle of artists in Kalimantan or about what is going on there? But we are not an industrial product that has to be publicized or that must be well known; and we have never striven for that or been interested in it. Our viewpoint is concerned with spreading and exchanging information, as richly as we can, in Indonesia as well as abroad. We send "Karbon" free of charge into almost all the cultural centers in every region of Indonesia, and we sometimes get responses from places like Aceh. We are also trying to build up a working network in the regions outside of Java. I think the consciousness that we are building up working networks has been growing stronger in the last few years.

H. Wiyanto: I have observed several times that, at your events in "ruangrupa", for example at workshops, artist residencies, exhibitions, etc., almost exclusively young people are present who do not show up at the exhibitions of the usual galleries. How do you define this community of "ruangrupa"?

A. Darmawan: We have never tried to build up a "community". We try to reach a new audience, with faster publications, for example via e-mail, radio, and youth magazines that the general art scene might not touch. How many of the 15 million people in Jakarta come to the exhibitions in the well-known galleries? Many groups that come to "ruangrupa" do so because they are interested and because they can make a connection between their everyday reality and our events. That attracts people not only from the circle of artists, but also students and people from the media, design, music, architecture... in short, the young circle, creative people who think openly and uncomplicatedly. We also distribute information in established circles of artists, but to this day it is still not clear why these are not so interested. Maybe because they think that what we are concerned with is not art...

H. Wiyanto: Recently, a good video work appeared by a young artist who is active in "ruangrupa", Reza "Asung" Afisina. "Asung" (translator’s comment: asung means to stir up, to agitate) is starting to gain international renown. "ruangrupa" already drew attention at the Biennial in Gwangju, and "Pause" (2002) even received special recognition from UNESCO. Why is "ruangrupa" receiving this respect in the international framework?

A. Darmawan: Something is not right about the way we identify ourselves. This usually happens with various things. There are many works, artists, and art organizations (going as far as the Orang Utans), that are clearly more "esteemed" out there. In the last ten years, so much has changed in the world’s art scene; many interesting and important artists and organizations/groups with art events are emerging that do not come from the "center" of art’s development. One of the phenomena is the artists’ initiatives (events or groups organized by the artists themselves), which usually arise in countries of the periphery and which intensely focus on local problems. This phenomenon also strengthens the peripheral network and becomes important in the development of visual art worldwide; it is regarded as an "alternative" to the center or to the mainstream ideas of the West, and of course this concerns the young artists now.

Originally appeared in Indonesian in "Kompas", Feb. 2005.
Translated from the German version by Mitch Cohen. 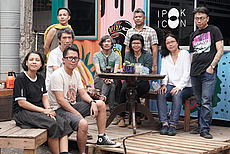 About the artist collective from Indonesia that curates the exhibition and events of documenta 15, 18 June - 25 September 2022 in Kassel, Germany.