Interview with Jim Supangkat about the CP Biennale 2005, and the protest of the FPI. 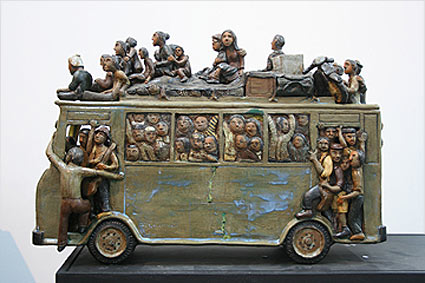 Hendro Wiyanto: What was your first reaction when you learned of the FPI’s demand to have the work by Agus and Davy removed from the exhibition because they saw it as a pornographic and disrespectful affront to the sacred teachings of Islam?

Jim Supangkat: I considered the consequences of the demand. The FPI is a group known as radical and militant, and so I expected we had to be ready for attacks and destruction. But the newspapers clearly stated that there would be no anarchistic activity. Instead, the FPI would resort to legal measures. So my first thought was that the work by Agus and Davy wouldn’t have to be removed after all.

But then the FPI brought together 500 people, who gained the permission from the police to stage a demonstration. Because of faulty information, half of them marched on the headquarters of Bank Indonesia on Thamrin Street; they were taken away by the police in the district of Tanah Abang. Yet some 250 demonstrators came in buses and trucks to the Museum of Bank Indonesia, where the Biennale was held.

The TV infotainment programs turned the work by Agus and Davy into the talk of the town, since one of the figures presented in the nude in this work is the popular film star Anjasmara. This probably incited the public dispute, since the FPI’s protest quickly gained the sympathy of many Muslim people. When a few Muslim leaders were interviewed, they denounced the work.

I don’t believe that all Muslims agree with the FPI. I do believe, though, that none of the Muslim organizations would deem the nakedness presented in Agus and Davy’s work religiously acceptable. What I feared most was a religious conflict on a broader scale.

Wiyanto: As the chief curator of the Biennale, did you ever think that this work could provoke certain groups?

Supangkat: Yes, and I wasn’t the only one. The co-curators and participating artists of the Biennale thought the same thing: this work could easily attract the attention of infotainment producers and, subsequently, the FPI. But since I believe in the freedom of expression, I didn’t ask Agus Suwage and Davy Linggar to modify their work.

Wiyanto: Hadn’t you heard of the FPI terrorizing or intimidating the Utan Kayu Community in Jakarta because they saw it as an Indonesian establishment where liberal Islamic ideas were increasing? [1]

Supangkat: Of course, I followed the development of the "war" between the FPI and Utan Kayu Community. That was how I knew of the FPI’s power.

Wiyanto: In your opinion, what is the main concern in this work by Agus and Davy, which uses digital image processing to show almost naked celebrities? Why did the two artists choose to show celebrities – subject matter that automatically encourages sensational reports in the infotainment media?

Supangkat: The work by Agus and Davy depicts urban space with a very personal atmosphere. Imagine an apartment, condominium, or mansion, where the residents enjoy an unlimited privacy. Ironic tensions develop here, for instance, by having a pedicab used as a swing chair, which emphasizes what Agus and Davy are telling us: this work is not about celebrating urban space. The pedicabs can be understood as a parody, because they remind us of the pedicab drivers who moved into the cities during the urban migration, but were never categorized as typical city dwellers.

This work reflects the theme of the Biennale: cities are not only inhabited by urban dwellers (the civil society aware of its civil rights), but also by poor urban dwellers (chained to life in the community and unaware of their civil rights). They come from rural areas with a long history of poverty. Although they often make use of urban symbols to keep abreast of current trends, the urban lifestyle is strange to them.

Regarding the idea of presenting naked celebrities in this work, I don’t see any significant reason why the nakedness should be interpreted as having a specific sense. This is something the artists have to explain for themselves.

In the work by Agus and Davy, the model’s genitalia are covered with white circles. These circles were deliberately added by the artists, using the digital process. But on TV and in press photographs, these have the effect of a censuring procedure. This attempt to produce sensational effects can be misleading and trigger many different reactions. People who never see the work in its entirety might think that the models are completely naked and displaying their sexual organs in public.

Wiyanto: How did the FPI voice their demand? Was it put forward legally, in writing? Have any efforts related to this been made?

Supangkat: Their objections were published through the free press, but no letter or notification of any kind was sent to the organizers of the CP Biennale 2005. It was only after they demonstrated that they sent their report to the police, in order to have it forwarded to the court. The details of the report firstly concerned the exhibiting of the work by Suwage/Linggar, which the FPI considered pornographic; secondly, it accused the work of disgracing religion. The FPI declared that they were taking legal action against Davy Linggar as the photographer, as well as the models Isabella and Anjasmara, and the organizers of the CP Biennale 2005. Agus Suwage’s name was left out of this list.

As the exhibition space owner, Bank Indonesia was issued a summons by the police. On October 12, the Manager of Logistic Planning of Bank Indonesia is meeting with police officials, together with the staff of his legal office. After that, it’s going to be my turn, I suppose. But I feel relaxed about it. Now that the exhibition has officially ended, I don’t have to worry about the Bank Indonesia Building or the artists’ works. In fact, I’ve decided to go to the summons alone and not involve anyone else in the case. And I don’t believe that a lawyer could help me. I’ll go with my invisible partner, my guardian angel.

Wiyanto: You announced that, in two years, the CP Open Biennale will no longer be organized. Is that a final decision?

Supangkat: The decision to discontinue the CP Biennale is final. To the artists, who expressed their sympathy and regret about terminating the CP Biennale, I said, "The CP Biennale has to die like a martyr, but the CP Foundation and myself are still alive."

Wiyanto: In your opinion, after this incident will the 'religious control' carried out by certain groups have a greater effect on contemporary art in Indonesia? Will a kind of resistance develop among Indonesian artists in response to such imposed control?

Supangkat: I don’t think that the FPI represents the majority of the Muslims, even though the principles they defend can never be denied by Muslims. But applying their protests to the field of art – protests that lie beyond the platform of art and the problems of the modern world – can only lead to us reaching the wrong conclusions. Any attempted resistance, and, even worse, if this is merely rhetoric, could only be connected to accusing Islam of opposing the freedom of expression, and finally, to accusing Islam of opposing art. In my mind, drawing such a conclusion is unfair, and it worries me that such rhetoric will be soon adopted by the West. My question is this: Can people of the Western world understand this to be an incident that could only take place as the result of civilizations clashing?

Wiyanto: In your opinion, is it necessary for curators in Indonesia to appropriate a religious knowledge or a certain religious understanding? In a recent discussion in Jakarta on religious pluralism, the religious attitude was also formulated as "tolerating the intolerant". Do you feel that your response to the protests now puts you in such a position?

Supangkat: I think that your question alone is already an accurate analysis.