Extensive photo project about the pilgrimage to Mecca. Statement of the artist and 24 photos. 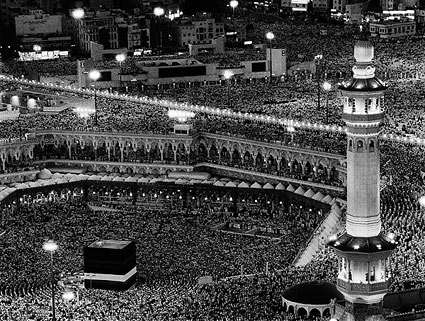 It is difficult to capture the Hajj [1] in text or visually since the Hajj is larger than any possible description. No book or photograph can ever give the Hajj its due. Even those who perform the Hajj can never fully comprehend it.

From the first day of the Hajj one is swept away by the sheer motion and size of it and you find yourself moving at another level of your consciousness. As you perform one ritual after the other you slowly discover the rhythm of the universe.

Even though the Hajj is a collective event it is also a very personal one, for each of us finds the Hajj he came looking for. It is not unusual to find pickpockets in the Hajj or ill mannered people. It is also very easy to find those who come only to fulfill a religious obligation without it changing anything essential in their life or behavior. However, for most it is a moment of change and rebirth and it is hard to leave the Hajj without it altering your personality forever.

The Hajj is an excellent laboratory of human behavior and thinking. It demands only from those who attend it a unified physical action but the results are very different. I have seen the best and the worst in the Hajj. I saw the old man who spends his life putting one dime upon another just to come to the Hajj. I saw also the thieves who come to the Hajj to make their yearly earnings from it. I watched, as soldiers stood for hours on end in the searing sun with only the shade of a small umbrella while they breathed in the dust and fumes of thousands of busses and yet tried in all this Human Ocean to aid and help the weak, the lost and the tired. I spent days with Muttawifs who pass sleepless nights to facilitate the performance of the Hajj. The Muttawifs are the traditional organizers of the Hajj. It is a tradition that precedes Islam itself.

From street sweepers to doctors to soldier all of them silent heroes, forgotten by us every year and taken for granted. We tend to assume that since the Hajj is a religious event, God also organizes it miraculously. In a way it is, for the Hajj is beyond all effort or intelligence or technology. As I watched the throng of people cover the earth I realized it was a truly miraculous event beyond our collective control.

Many of the Muttawifs I spoke with told me they begin to prepare for the next Hajj the minute the present one ends but in the end the Hajj is beyond any organizational power. Imagine the biggest army in the world, more than two million strong, speaking over two hundred languages and dialects with differing social backgrounds converging on a small city of a few hundred thousand. This army has to be provided with food, housing, hygiene and health care including the entire auxiliary, which serves and surrounds it. This army has to break camp several times in only four days, no more no less.

I was told that the government brought world experts on traffic control to help them organize the movement of the Hujjaj from Arafat to Muzdalifa- About fifteen kilometers-, which has to be done in six hours. These experts studied all the possibilities and finally came back with their solution. The movement of all the Hujjaj from Arafat to Muzdalifa would take six days. It was impossible to make them understand that it was a religious obligation and we could not exceed the allotted time span.
Another aspect of the Hajj, which attracted my attention, is the market in Arafat. Many Hujjaj fund their trip to Mekkah by bringing with them native products from their lands. You can find the best Iranian pistachio if they are in season in Arafat or parrots from Africa or High Tec binoculars from central Asia. You can then buy products that you would normally not find in Saudi Arabia.
I am one of the few women who have covered the Hajj extensively and I will be forever thankful to God that he gave me this chance. It is an experience, which has changed my vision of the world and of myself. I was able to gain great insight into the human psyche and racial differences. It allowed me to gage both my physical and mental abilities. Other than being in a war zone there is nothing more strenuous than the Hajj. One has no way of knowing beforehand what to expect from the people one is photographing or those who are working in the Hajj. I was faced with every kind of human behavior, whether religious or traditional. Some came up to me and asked me to photograph them others shouted at me that what I was doing was against our religion but, most just ignored me worrying more about the state of their soul than about some woman photographer.