The Beauty of Resistance

A poetic statement by the Iraqi artist Mohamed Abdulla, presented together with a selection of his artworks. 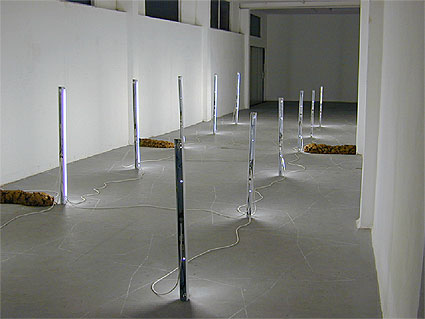 A contemporary statement grasps the opportunity to reach a wide audience
Shifting the camera and model into slightly different angles under florescent yellow light
Galloping horse
No fly zone
2 pages
A series of photographs projecting my profile.

The time is his
The land is his
The flower is tulip
but,
The horizon is mine
He owns the stars
but,
My horse on his roof

This is not his word, this is my memory.

Not far from the border, a boy jumped into the river and walked on the wrong side.

What does it mean to be Iraqi?
A series of photographs taken by a model wearing his clothes.

I’m not a Persian carpet
I’m not a Chinese vase
I’m not an Indian spice
I’m not Scheherazade
but,
Neitherlander.

An identity could create a sense of belonging, offering me the warmth that I’ve missed after long years of struggling on a freezing front line, a refuge that keeps the life glowing.

He concludes that an atmosphere of distrust generates suspicion even where the best of intentions exist.

third photograph
"We have become an illustrative item for a curator initiating a presentation about the Iraqis, the Muslims, the Arabs or the others." I told my artist colleague while visiting an ethnic art exhibition in Amsterdam, in 1997.

Without beginning and without end, just being.

How does one recognize an Iraqi?
I was an artist in Baghdad and then became a modernist when I went to the Netherlands. But as of three years, I have become an Iraqi contemporary artist living in Europe.

There are times when products don’t need to communicate anything, not even an aesthetic experience.
Sometimes it is enough for them just to be there!
It’s not the technique that matters, but the style. The technique stays the same.

fourth photograph
"To be or not to be is zelfde (the same)." My written response to the attitude of my instructors and colleagues, hung on the wall of the Fashion Design department at the Gerrit Rietveld Academy in Amsterdam, in 1999. This sparked the frustration, disappointment, exclusion and marginalization, and turned it into a new form of cultural practice – an imposed territory where I have to defend my existence in this secured homeland.

but,
I have to explain

fifth photograph
I’m not young, I’m not new, and I don’t make people laugh
But, according to my watch I’m not late.

"Why did you accept my application?" A question that I asked the committee (advising researchers) of the Jan van Eyck Academy in Maastricht, in 2001. I had years of rejected applications from many art institutes, without explanation and without details.

The news is changing, the market is changing,
No today is ever the same
Every one that’s involved in our programme needs to know what’s happening
You get the option in a minute
The people appear in our show, watch our show

Hello welcome to our programme.

What contemporary cultural products do you expect from Iraqi cultural practitioners living in Iraq under more than three decades of dictatorship, wars, siege, and most recently, direct occupation?

What contemporary cultural products do you expect from Iraqi cultural practitioners living excluded and isolated in exile?

A product is sold on the basis of the feelings it evokes.

We cannot experience a cultural product, if we don’t understand the forces that affect its practice.

sixth photograph
At the end of this tunnel there was no light, but the floor and ceiling met in a thin black line. As he slowly walked towards the horizon, he left a stream of objects in his wake. They fell from his body, together with his clothes.

My thoughts are the only things I have, that are made of tin
This is a story of words and images rather than guns
Having an impact on the direction of contemporary statements
Perhaps it doesn’t win any votes, but, with fresh blood, try and scratch off the varnish
Everything needs to be clear, new and transparent. Things barely happen!

seventh photograph
he was already on board

Suddenly the alarm clock rang…where is the wall, I’m shooting in the air, he isn’t there, and he doesn’t exist. It’s a mirage I followed from Baghdad to Amman, crossing minefields, from Amman to Tunis, from there to Switzerland and into the Netherlands.

A measurement is only possible between two points

eighth photograph
It was as if I had just stepped out of another movie and was acting out scenes meant for others.

Recently I wrote to a friend of mine "it is late to discover that I was working more freely and efficiently under a dictator’s censorship than with the categorizing and bureaucracy of western art institutes." After 10 years of living in West Europe on the alert, diversifying the sources of knowledge, navigating the topography of the cultural scenes, crossing the disciplines borders, I turn the frustration into stimulation, the exclusion into challenge, the marginalization into a virgin space, and the imposed label into a discipline in which I explored new forms of practice.

How would you describe your new aesthetic?

After three years of working in this imposed territory, I realized that I’m polishing this imposed label instead of questioning it. I have to play the role of the Oriental artist and export this label to my own kind over there, in order to gain the Western institutes’ recognition and suit the cultural globalization demands.

ninth photograph
And because it’s more than just a photographer and a model’s game of making believe. This picture comes much closer.

How to be an artist not a citizen?
How to avoid being either an Iraqi or a Netherlander?
How to create an unpolluted space and not become a corrupted artist?
How to sustain the free space, which keeps art an act of necessity?
How to be naked without the emperor’s new clothes?
How to seduce the others into sharing this experience?

My dear friend, it’s an unequal long-term battle. But don’t worry, I’m still living with that rebellious companion who refuses to be tamed!