Works by 8 artists, curated by Vasif Kortun. Galleries in Berlin and Stuttgart, Germany. 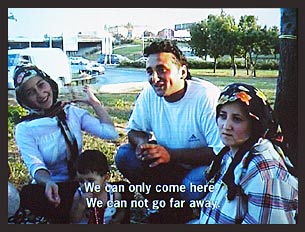 With the exhibition series URBANreREVIEWS, the Institute of Foreign Cultural Relations (ifa) strives to present different aspects of megacities. The exhibitions in the ifa galleries in Berlin and Stuttgart focus on individual megalopolises from the perspectives of urban planning, sociology, communication and aesthetics, and take into account the respective cultural landscape. Since the launching of this series in January of 2004, Moscow, Istanbul and Lagos have been showcased so far. Additional cities are presently being considered.

Vasif Kortun, who heads the Platform Garanti Contemporary Art Center in Istanbul, was curator of the exhibition "URBANreREVIEWS Istanbul". After serving as director of the 3rd Istanbul Biennial (1993), Kortun is also one of two curators responsible for the next edition of this important, international art event.

Whether with a poetic or documentary approach, the artists represented in the exhibition focus on the life and urban situation of Istanbul’s citizens, to which they themselves belong. Among other topics, their works deal with how people try to come to terms with an incomprehensible urban context and establish themselves within it; how public space is occupied by inhabitants, but also how individuals withdraw into their own privacy.

For centuries, Istanbul – the 2,500 year-old city on the Bosporus – was repeatedly subjected to cultural and architectural changes. From Byzantium via Constantinople to Istanbul, this city between the Orient and Occident was fought over, destroyed, reconstructed, converted and extended. With the founding of the Republic of Turkey in 1923, Istanbul lost its status and function as the country&apos;s capital city, and its population sank by almost forty percent, leaving only one million inhabitants. During the Great Depression and World War II, life in Istanbul was relatively humble and tranquil. It was only during the 1970s that the city exploded, both geographically and demographically speaking, to become one of the world’s megacities with 13 million inhabitants, boasting an above-average youthful population and a daily influx of over a thousand migrants. The city now covers 5,500 square kilometers on both sides of the Bosporus. It grows and extends itself in stages, at times spontaneously and breathlessly, and at others only temporarily.

The industrial areas have been relegated to the periphery and replaced by banking and office towers, service and shopping centers; urban expressways have cut through the historic inner city, and the middle and upper classes have fled the city center, in order to live in new, security-enforced, residential estates while, almost overnight, newcomers continually erect new &apos;Gecenkondu&apos; quarters, thus transforming the historic center into an oriental Disneyland. Since the 1980s, authorities have developed master plans for preserving the core of the old city and redeveloping greater Istanbul into an international trade and financial center between the East and West. But before the plans could be publicly discussed, they were invariably overtaken by the ‘built reality’. Yet this city nevertheless ‘functions’. Istanbul’s citizens organize their own lives; they live in the city, and, in many case, according to their expressed needs. Therefore this megacity appears extremely vibrant and well organized in spite of its problems with pollution and traffic jams.

(Compiled with information and quotes from press releases of the ifa.)
14 image pages, more info