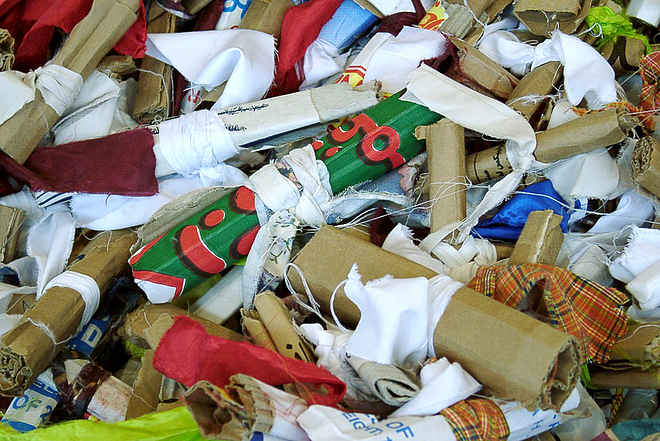 Following five years of art studies in London, Hassan Sharif returned to Dubai in 1984. At home, he wished to make a contribution to a new understanding of art, opening the eyes of the community to the international scene and initiating a productive debate. In the United Arab Emirates, he provided the impetus for an experimental effort to provide artistic analogies for a hybrid awareness of identity, in which the recent memory of the age of nomadic Bedouin tribes becomes reconciled with a hypermodern present. Since Hassan Sharif founded the Group of Five [1] in the mid-80s, he has been the leading figure of a scene that is constantly rejuvenating itself, seeking new directions in art and in life.

Hassan Sharif told us on the phone that his house was difficult to find and suggested a nearby hotel as the meeting point. He and a friend, the Indian filmmaker Valsalan Kanara, were waiting in the lobby of a noble hotel on the futuristic Sheikh Zayed Road in the southern part of Dubai. The wild parking lot 100 meters away from the hotel marked the beginning of the boomtown’s dusty hinterlands – the "boom" at this point is represented by a stretch of buildings on both sides of the highway. Right next door is the old quarter with simple houses of two stories at the most, one of which belongs to Hassan Sharif.

As long as there was still some shade, we sat in the courtyard of a small house between hibiscus and yucca plants. Here is where Hassan Sharif’s works are created; here is where he tears, folds, layers, glues, binds and ties his rustic objects out of cardboard, cloth, remnants of cotton, wire and other "worthless" materials. Many people ask him where the art is. Indeed, he says, "It is so simple that anybody could do it and I point that out. But an invisible facet of my work – my thoughts, my writings, my theory, my philosophy is also an integral part of them."

One important factor is time. Every work is created with a consistently repeated movement of the hand, like meditation, not in the Islamic tradition but rather more in a modern or post-modern sense. In the end, this process is materialized in each object so that it bears the time of its creation in itself. In the more recent works, another dimension is added. Hassan Sharif emphasizes the brand names on the cardboard boxes he has used, "because we live in a land of consumers, the logos represent our epoch. I no longer have to date my objects, you can see the year that they were made from the packaging that I used."

This art is diametrically opposed to the fairy tale image by which Dubai is so often defined. It is no wonder that since they are so completely unsuited to representational purposes, they would find no sympathy with an upper class that is fascinated by appearances. Hassan Sharif expounds, "New art can only spread when a society has established itself and our society is very young – the United Arab Emirates were founded in 1971. We do not have a problem with the government, but many of the authorities in our country prefer traditional artists who paint the camels and horses that they love so much. We can also paint, but we are trying to express something new in a completely different way. They have invested in us in sending us abroad to study art and we are now trying return the results of those studies, and our experiences, to our country. But that seems to be too modern for some people. We are not arrested or censured; we are respected, but our art is misunderstood and that is why we are not properly supported."

The situation has, however, changed somewhat. Since the mid-nineties, the group around Hassan Sharif has been represented in important exhibitions both at home and abroad. The Group of Five was invited, for instance, in 1994 to Holland and 2002 to the Ludwig Forum in Aachen (Germany) for larger presentations. At the 6th Sharjah Biennale in April 2003, Sharif received one of the special awards. In our interview he went on to qualify his previous statements in that he emphasized he was referring less to the governments in the Emirates Dubai and Sharjah, as the central government in Abu Dhabi. In the meantime, as a result of the recognition received abroad, it is difficult to ignore his artistic approach and that of colleagues. "After more than 30 years of struggle, the younger generation now has a better chance of being accepted; that makes me happy and, with respect to the future, confident and optimistic."

Hassan Sharif actively supports younger artists with his texts, his knowledge, his advice, and encouragement. In the past, he gave workshops himself, but now he prefers to leave that to his colleagues of the next generation. Two of them, Mohammed Kazem and Khalil Abdul Wahid, joined us somewhat later and talked in detail about their activities and plans [2]. 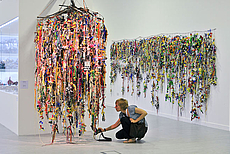 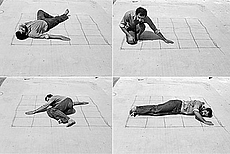 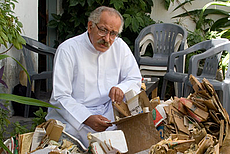 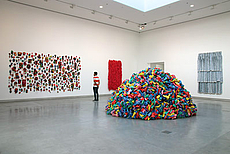