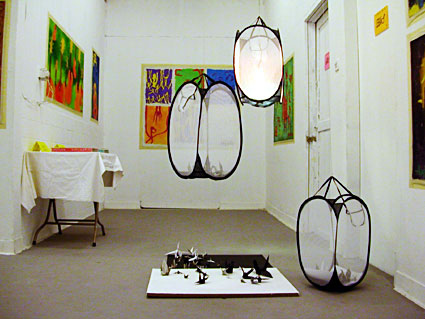 Autonomy in Setapak
Rumah Air Panas: an alternative space for artists trying to escape the conventions of market forces
By Tan Sei Hon
In 1997, a few Malaysian artists took over a spacious single-storey house in Setapak and turned it into their personal studio. Not just as a place to find their muse, but also their rice bowl. When not working on their art pieces, these struggling artists would be constructing bulky items for display and decorations at events, functions and performances. The huge space at the house was conducive for this.

Today however, Rumah Air Panas, located on a small plot of open land surrounded by construction activities, has grown to be a venue for artistic experimentation, discussions and exhibition. A few experimental music gigs were even held there.

The idea has been proposed from early discussions between the founders: photographer Phuah Chin Kok, visual artist Liew Kungyu (a graphic-designer-turned-artist who is known internationally for his sardonic kitschy humour) and a handful of friends. They felt there was a lack of alternative spaces in Malaysia that nurtures a healthy perspective of art. They want a space that will place importance on the individual’s need for intimate expression and exploration. A space to be free from the conventions, expectations and dictations of market forces.

This approach is vastly different from the ones cultivated by commercial galleries and institutions. Given the way they are run, artworks are produced by artists and read by audiences within a narrow context.

The initial idea was to promote Rumah Air Panas as a modest and affordable venue for young artists to experiment. Like an independent artist residency programme. The &apos;programme&apos; was well received. Numerous young artists like Phuah Thai Meng, Yap Sau Bin, etc, are producing and even showcasing their works here.

Local visual and conceptual artist Tengku Sabri Ibrahim recently concluded an exhibition entitled Inside: Continual Lessons. Jointly sponsored by Pustaka Cipta and Yayasan Kesenian Perak, the modest exhibition is a gentle and honest reflection of the artist. Here, he contemplates upon the act of creation as a means to understanding and embracing his creator. Observations of nature are laid down in text and the drawings are pasted on painted gray, empty walls around the rooms. They serve as stark signposts, inviting all to &apos;meditate in awe&apos; within the bosom of God’s omniscience and omnipotence. This unique exhibition serves to reinforce the fact that alternative spaces must be provided to accommodate works of such nature.

Rumah Air Panas, better known as RAP, is essentially a collective of multi-disciplinary artists. There are about 15 official members, including painters, performance artists, installation artists, art instructors and writers. All members share duties and responsibilities in running and promoting their activities/events equally. As a result of intense brainstorming, they have decided to register RAP as a non-profit association, in order to give structure and formality to their activities and resources. It also won’t hurt in the procuring of sponsorships.

A set of objectives have been outlined to steer RAP in a more focused direction. The first of two main objectives is to promote dialogue between arts practitioners. This, according to Chong Yong, who took over the space as main tenant in 2002, would allow for info-sharing/ networking/ collaboration. Exchanges of critical ideas on socio-political and cultural issues can then take place.

The second main objective is to bring the public to art. This will be done through discussions, writings (they plan to publish their own newsletter) and events. Members of RAP hope that a mutual learning process will take place between the audience and artists. As Yap Sau Bin, a practicing visual artist and educator, points out, this is to further assist the audience in understanding the creative process (such as the choice of subject matter, genre and even the medium). The layperson can then gauge where, why and how artists get their inspiration, and may be able to use this knowledge as entry points into the works.

One of the ways RAP implement this is by inviting local artists who have studied, exhibited and worked abroad, to come and give slide presentations of their work. Recently, Wong Hoy Cheong came by to share his experience as a participant in the prestigious Venice Biennale international art exhibition, which features some of the most cutting edge artists from around the world [Note of the editors: see the Report in Universes in Universe]. Other artists who’ve presented slides at RAP include Ivan Lam (USA), Nur Mahnum (Germany) Helen Guek (Australia) Ng Han Loong (France) Jean Yap Jian Yi (Japan), etc. This encouraged a sharing of experiences that would ultimately, according to Chong Yong, enrich one’s worldview and even inspire a more intense, personal artistic growth.

It is interesting to note that the activities initiated by an independently run body like RAP should have been the basic priority of national bodies of arts, that is if they were truly serious in serving and developing the growth of Malaysian arts. The taxpayer’s hard earned money should be channeled more aggressively toward educational activities instead of some politician’s costly exercise in public relations.

RAP’s 2003 project entitled "Space [s] dialogue and exhibition" is a further testament of their commitment in promoting the growth of independent art. The 3-month-old project involves the participation of about 26 artists. Artists on their own initiative got together to discuss issues relating to space, creativity and art while independently organizing their exhibition. Featuring works from various media and discipline, the final works are negotiated responses to the theme. Younger generation of artists wishing to explore a path of autonomy in making art should also pay attention to the DIY spirit common among local indie music.

Does RAP’s existence and growth signify a change in the visual arts scene? One can only hope.