Peoples and shadows. Contemporary Art from Kazakhstan and Kyrgyzstan in Mexico City. 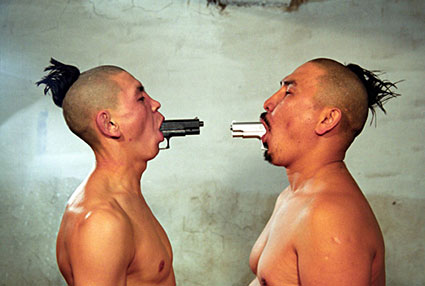 When Olivier Debroise, program coordinator of the independent art institution CANAIA (National Chamber of Artistic Industries) in Mexico City, and Valeria Ibraeva, director of the Soros Center for Contemporary Art in Almaty (Kazakhstan), met in Prague at an international event in 2002, they realized that they had never before met anyone from the other person’s country. The idea of presenting contemporary art from Kazakhstan and Kyrgyzstan in Mexico was born.

In the exhibition text for "Pueblos y sombras" (Peoples and shadows), the curator writes that due to the fact that Central Asia is so unknown in Mexico, she has emphasized works of art that deal with the day-to-day life of the peoples there. The exhibition mainly shows photographs, videos and video games of customs and practices, the working world, social life of the nomads, and pre-Islamic shamanistic techniques. With her selection, she also wished to show how artists from the region are reacting to processes of modernization, increasing militarization, the growing abyss between rich and poor, and the rapid "Americanization" of their countries.

Valeria Ibraeva concludes her text poetically "...life goes on, it changes, and its light and dark sides alter in the infinite expanse – everything is a question of perception, for, until recently, Kazakhstan and Kyrgyzstan were white spots on the map."