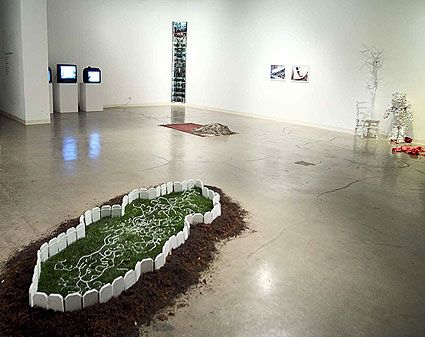 All aspects of globalization today - political, economic, judicial, and artistic - would seem to foreground the issue of proximity and distance. Today, proximities have the power to induce anxieties, just as distances sometimes create the illusion of security and purity. For some, proximity to something unfamiliar becomes the cause for drawing boundaries, for saying "This is where I begin and that is where you start."

Others continually seek new proximities, new spaces, and in so doing transform both themselves and that which they come into contact with. Proximity is a consequence of a movement toward or a witnessing of an event, a disaster, or a person. In the show "Poetics of Proximity" at the Guggenheim Gallery at Chapman University, all the artists’ works articulate precisely this latter engagement with events provided by the current media. By transforming the quotidian, the historical, and the personal, the artists in the show hint at other relationships that demand a new audience.

The works featured in the show explore the intertwined relationships between fragmented subjectivities, displaced contexts, and the sometimes-irresolvable perceptions that result from the effects of proximity in a world in which commercial media can create psychological and ideological boundaries that can both divide, and trivialize. In a world eager to make judgments, the works of these and other artists allow a space for contemplation, a slowing down, and a transformation of straightforward resolutions. Using wider contexts, the works resist the narrow representations of 'non-Western' others. By highlighting the repressed proximities – intellectual, psychological, and aesthetic – these artists create poetic spaces that are as formally challenging as they are aesthetically and politically diverse.

Curated by Lida Abdul and Gul Cagin, two Los Angeles based artists, and featuring works by Los Angeles artists as well as by an international group of artists from Morocco, Afghanistan, Algeria, Turkey, and Iran, "Poetics of Proximity" strives to expand our narrow perception of other cultures and other bodies.

Curatorial text
We thank Lida Abdul for providing the material for this presentation.