The authors' visual communication concept and teaching experience in Beirut. Some students' works. 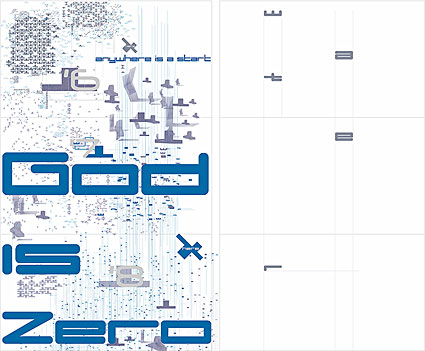 Local Flavor:
Teaching Graphic Design in Lebanon
Today, I stand at a crossroad where I have to redefine Design as a Visual Language on a regular basis; static definitions have a much shorter life span.

I see Graphic Design as a process of translation the verbal and the silent into visual language; a search to extend the possibilities for producing meaning through typography, imagery, narrative and structure, where crossing the barrier becomes daily occurrence. Design is a swinging force between what constitutes meaning for us designers, and delivering it to audiences.

The way design informs the message takes into consideration its nature, as well as the visual referential parameters of the receivers. Visual language is a vector of communication between a sender and a receiver, provided both sender and receiver understand and share the same code or language.

A language is at the core of an ensemble of myths, memories and other valuable symbols essential to the formation of a feeling of belonging.

As design educators in an eclectic cultural context, how do we inculcate the notion of what is local which is under perpetual change?

Do we have to?

The Lebanese educational system today is tributary to several factors that have shaped it. The Lebanese population is composed of different religious communities, some Christian, mainly Maronite, Greek-Orthodox and Greek Catholic, others Islamic, Sunnite Muslim, Shiite Muslim and Druze. Most schools in Lebanon have a confessional character. Through relying on a communitarian framework, they enforce differential socialization, and a confessional separation of the Lebanese people.

On language and visual culture
Apart from being the conveyor of culture and identity, language is also the means of nourishing and maintaining the questioned culture and identity.
Language, along with religion, constitutes the daily culture and the territory thought to be the defining artifacts of an ethnos by anthropologists. A language is at the core of an ensemble of myths, memories and other valuable symbols essential to the formation of a feeling of belonging.

This cultural hybridity Lebanon witnesses produces generations that do not have a similar conception of their cultural identity at large, and their visual culture more specifically.

We live in an age where identity has become referential in time, i.e. our whole set of identitarian referents is random, constantly mutating and changing with time and new events. The media we are exposed to on a daily basis is becoming more and more globalized, and deals less and less with the sense of the local in its conventional definition.

Local to me refers to the milieu I grew up in, the school I went to, the nursery rimes I sang, the comic strips I read, the music I listen to, the magazines I skim through, the books I read, the language I use to express myself or to count!

Beirut is a big digestive tube that ingurgitates everything and anything, and spits it back in a non-formulaic entity, which defies any rule of classification in the conventional understanding of the word; which is a new category in itself altogether; this new category which defines our visual culture today has the following characteristics:
- Hybrid
- Loose
- Eclectic
- Innovative
- Multi-faceted
The students I have come across up till now are, with the exception of some, bred along differentiated levels of exposure to cultures as vehicled by the various languages they practice. They have a different understanding of visual communication as a design language that embodies their ideologies and cultural referents.

The work featured was developed at the Lebanese American University (Beirut Campus) over the last 3 years, since we introduced the &apos;final project&apos;, whereby students have to elaborate an area of research, be it sociology, anthropology, political science, philosophy, linguistics, or design theory for that matter. It reflects the wide array of their respective cultural and social motivations.

The course has become a platform to introspection, supported and guided by the various members of faculty. This has resulted in students more mature, with a wider understanding of where they stand in relation to their cultural, social and political environment, gradually moving away from spoon-feeding.

In relation to language, Nahla Kotob conceived and designed Jargonet, which is a glossary of all hybrid terms used by Beiruti people, accompanied by a visual interpretation of the phonetics.

Aida Soubra revisits the spirit of Beirut in the 60&apos;s, in the form of a newspaper she calls &apos;Retro Beirut&apos;, where she displays paraphernalia from this era.

Alia Noueihed raises up a political issue through design, by developing a whole narrative about/for the Palestinian cause.

Wissam Karout writes a personal story through type and form, relating a moment of his life when he met 2 persons in Brno. He chose the square as a basic shape, which symbolizes the &apos;elephant&apos;, a slow sad shape like himself in the story.

On another hand, a whole body of work is being developed in the design studio given by my colleague. The result is a breakaway from any visual reference to the local in its familiar understanding, as stated by Ms Silia Abou Arbid (Architect and Designer):
"Design need not assume an identity but a textual element which subtends the disembodiment of the body into crucial states, that is to say, abstract ideas that make visible the possibilities of things."
In this perspective, Walid Mohanna proposes a reading of the industrial culture that emerged in the early 80&apos;s (in film, performance and music) through the theories of Deleuze, Baudrillard and Foucault.

Taking us into his voyage, Malek Anouti proposes a new reading of music as a stimulant to actualize music through our bodies.

Rania Bitar
Portrays her understanding of God and what is godly through the 4 natural elements.
God as giving light.
God as present everywhere, like air.
God as attracting us, like earth.
God as being an essential element, like water.
Revisiting very vague and scarce memories of stories about the Lebanese war, as told when growing up away from the physical premises of it taking place, Hanna Abi Hanna creates Insignificance. It&apos;s an audiovisual presentation consisting of a short animated movie accompanied by a live musical performance.

The variety of work developed is a reflection of the multiplicity of the visual cultures at presence.

The visual language elaborated in the graphic design program at the Lebanese American University establishes new forms of expression, which are deeply interrelated to the building of our future society.

The course acts as a springboard between a state of total ignorance about oneself, and a much clearer understanding of it as well as one&apos;s social-political context. The final project mirrors each student visual and cultural referential system, be it the street vernacular, the music culture of the 80&apos;s or a new reading of the Lebanese war.

There are infinite possibilities of integrating information phenomena of social nature, into innovative visual language solutions, which reflect strongly the context they emanate from.

The challenge of teaching design today in this part of the world resides in the need to keeping it faithful to its context.

We are all invited to rethink Contemporary Graphic Design as an information manager, a transmitter and perpetuator of culture.

We are now held responsible for expanding the borders of visual language, translating vital information, which is at the basis of contemporary society, into intelligible forms, shapes, colors, and letterforms… These borders are in constant change as they reflect the global age we are living in.

Yet we have to be up to it.