Mohammed Kazem and Khalil Abdul Wahid from Dubai about the support of a new generation of artists. 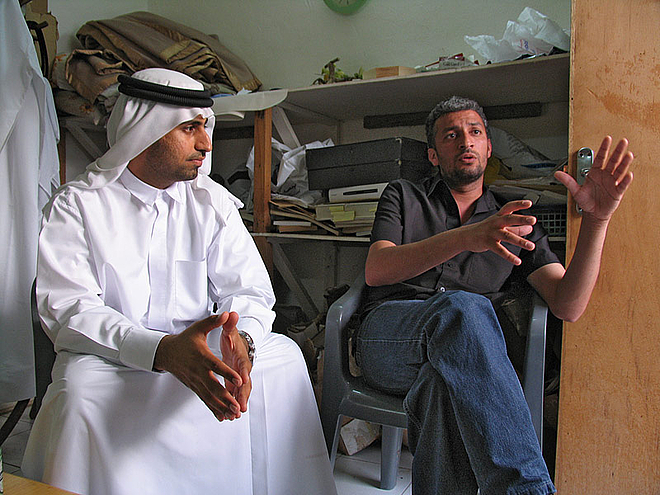 While visiting Hassan Sharif in Dubai (see the article [1]), the situation of the upcoming generation of artists in the United Arab Emirates was an important subject. He himself has been involved in their promotion for years, for instance through the Art Atelier in the Youth Theater and Arts in Dubai, which he founded in 1987. In the meantime, young colleagues have begun following his example, leading workshops, organizing exhibitions, and more recently also influencing events through leading positions in the National Artists’ Association. We met two of the most active persons, Mohammed Kazem and Khalil Abdul Wahid, at Hassan Sharif’s. They are members of the new Board of the Emirates Fine Arts Society, Mohammed serves as Vice-Chair and Khalil as the Director of Events.

We had already met Mohammed Kazem at the previous Sharjah Biennale in April 2003. You could hardly miss him there – his autobiographical productions were to be seen everywhere, serving as one of the primary advertising motifs. In accordance with his preference for the new media, he used a video installation and photographs of an action in the exhibition. He threw wooden signs with the coordinates of locations, calculated by modern satellite navigation systems, into the ocean, thereby making them disappear into the immeasurable. Kazem is the youngest member of the Group of Five founded by Hassan Sharif [2].

Khalil Abdul Wahid has also been working with video since 2002, but continues to paint as well. In a video projection last year at the Sharjah Biennale, he combined the two; the camera follows the rapid movements of the brush in extreme close-ups. The viewers got the feeling of losing their balance and becoming dizzy.

Since 1999, Mohammed Kazem has borne the responsibility for the summer workshop of the Dubai Art Atelier that was initiated by, and until then led by Hassan Sharif. The workshop is under the authority of the Central UAE Ministry of Education. In order to handle the ever-increasing number of participants, Khalil Abdul Wahid came on board after returning from his studies abroad. Both of them emphasize that the workshop is not characterized by a one-sided teacher-pupil relationship, but that the learning is much more of a cooperation and give and take. Currently, there are about 45 participants, most of whom do not stem from the arts and, with a few exceptions, are between the ages of 14 and 30 years of age. As a rule, the students come to the course twice a week, where they discuss that which they have produced in the meantime at home.

Mohammed and Khalil emphasize that the workshops are not just about learning artistic techniques. The aim is to sensitize the pupil’s vision in general and attentiveness toward everything that is happening around him or her. They show art history slides, present works from other artists, recommend books, and talk about them. Through interviews, the artists are encouraged to talk about their work. The training also consists of arranging exhibitions and includes publishing small catalogues. The seminar leaders encourage the students to become involved in the activities of the Emirates Fine Arts Society, and hope that some of them will become curators someday and take part in a better organization and mediation of the country’s art life.

It is interesting and important to note that many girls and women participate in the workshops. Some might say that it is only a waste of time because often they can only come for a short time and then have to return to their traditional roles at home and in the family. But even if they can only attend for a short time, it is an experience which they will carry with them for years to come, and will have a positive influence on the manner in which they raise their own children. Besides that, 15 years ago it would have been inconceivable that girls and women attended art courses and worked side by side with boys and men. Women are increasingly becoming a force in the Emirate art scene, even in the Board of the Emirates Fine Arts Society.

Together with 10 students from the summer workshop, Mohammed Kazem is preparing an exhibition with video art, installations, and painting for November 2004. It will be held in the Dubai Media City, a huge complex for the media industry where there are currently about 850 companies with more than 5,000 employees. The project is financed by one major sponsor and additional local companies, which is a novelty. The foundation of the project rests upon a strategic consideration. So that the next Sharjah Biennale in the spring of 2005 does not consist of only the same names from the United Arab Emirates as the previous edition, Kazem has selected 10 young artists to be potential participants. In the course of preparing the exhibition in the Dubai Media City, they are receiving special training which should qualify them for and encourage them to take on larger tasks.

On the other hand, the show will also serve as a test with respect to the public. As Mohammed Kazem puts it, the gulf between art and the public, which exists elsewhere as well, is especially great in the Emirates due to the fact that art is not taught in the schools. For that reason, it is the job of the artists themselves to develop an interest in their fellow citizens, and above all the youth, and to introduce them to new forms of expression and concepts.

Mohammed Kazem and Khalil Abdul Wahid intend to keep us informed of their activities so that we will be able to report again in the next issue of this online magazine.