Paintings: From city landscapes through urban structures to symbols of current plights. 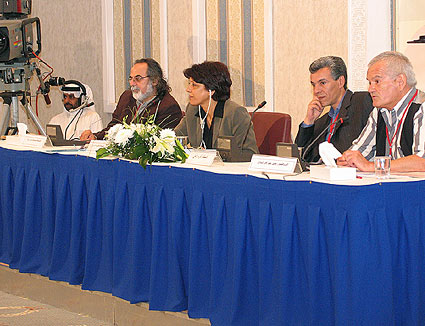 Our stay in Bahrain began with a surprise. In the opening lecture of the symposium at the Bahrain-Asila Culture Forum, the speaker claimed that if art from the Arab world hopes to find a place in a globalized world, it will in first place have to deal more intensively with conceptual and experimental art forms and installations. A huge potential is to be found in this for the entire region. To emphasize what she was referring to, she showed Patricia Piccinini’s mutant figures (Australia’s contribution to the last Venice Biennale) and described Anas Al-Shaikh’s installations from Bahrain. We learned that the speaker, whose claims clearly upset the audience and triggered loud protests, was Balqees Fakhro and one of the most renowned painters in Bahrain.

The next day, we were received by Balqees Fakhro at her home. First, she led us through the rooms displaying pictures from the various phases of her artistic career. On the oldest of these, painted about ten years ago, there are two-dimensional urban landscapes, where the houses in the old city of Muharraq in the north of Bahrain can still be recognized. Later, her painting becomes more abstract, the colors lighter, and the shapes larger. "The structure of the city is still visible, but you no longer recognize domes, buildings, or minarets," explains Balqees Fakhro. "The city becomes someplace, somewhere..."

"Somewhere" - is the title of a series of paintings on which she is currently working. A spiritual light beams out from the thick colors. Balqees Fakhro says the shapes occasionally bring to mind the outline of Saudi Arabia or the map of the Gulf region. But they are existential symbolic images of places – somewhere.

Commenting on the 2003 series "Refugee Camps" Balqees Fakhro explains that we see refugees from many parts of the world everyday in the news, in Afghanistan, Pakistan, Palestine or elsewhere. This is a fact of our age that simply cannot be ignored. But for her it is not a matter of illustrating something concrete, but rather to evoke images in a general sense.

In contrast to many of her colleagues in Bahrain, she does not see any conflict between her painting or panel painting and the experimental approach, which she spoke out in favor of at the symposium and where she appreciates the direct relationship to problems of the present day. The two may exist in parallel without mutually excluding one another.