International video art in Kyrgyzstan, curated by Leeza Ahmady. With an essay by the curator. 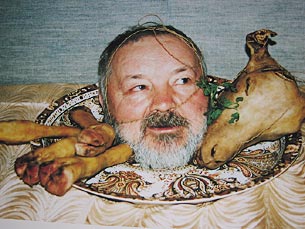 In April 2004, the second "Peace and Respect" festival was held in the capital Bishkek. Almost 200 artists from countries in Central Asia as well as Russia, Belgium, Japan, and Switzerland participated with contributions and performances from the fields of theater, music, dance, fashion, design, visual arts, and crafts. An international conference was dedicated to the subject "Culture, Dialogue, and Sustainable Development in Central Asia".

In the framework of the festival, the G. Aitiev Kyrgyz National Museum of Arts presented "Contemporaneity", an exhibition with video works by 13 artists from various countries. Amongst the artists were Muratbek Jumaliev and Gulnara Kasmalieva, video art pioneers from Bishkek. Leeza Ahmady, a native of Afghanistan living in New York, served as curator. Her aim was to generate a larger audience for video art, which is a relatively unknown discipline in the region.

At the same time, the museum presented "The Others", curated by Ulan Djaparov (Kyrgyzstan) together with Elena and Victor Vorobyev (Kazakhstan) and arranged by "Kurama Art", a gallery for contemporary art recently opened in Bishkek. The simultaneousness of the two exhibitions has certainly provided new impulse to the spread of new artistic practices in the region.

Other presentations and lectures in Osh, Kyrgyzstan, and Tashkent, Uzbekistan