Morocco's Foreign Minister on the event he initiated together with Mohammed Melehi in 1978. 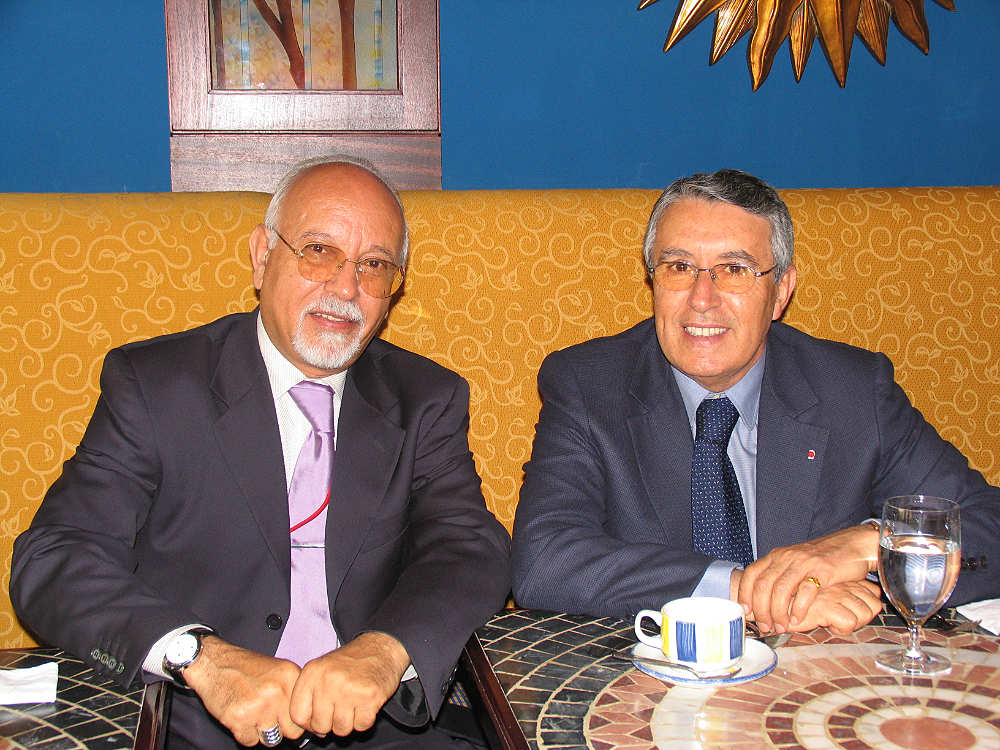 In 1978, Mohammed Benaïssa and Mohammed Melehi initiated a cultural festival in the Moroccan city of Asilah (or Assilah [1] that was adapted to Bahrain under the name "Bahrain - Asilah Arts & Culture Forum" in April 2004 (see the article in this magazine) [2]. It is there that Melehi gave us details of the festival in Morocco. He also wanted to introduce us to Benaïssa, who has been Mayor of Asilah and is Morocco’s Foreign Minister since 1999. We had little chance of an interview, since Benaïssa was returning only on the day of our departure. We happened to meet him at breakfast in the hotel, straight after his arrival. Although he was tired from the night flight, he agreed immediately to answer our questions.

We were particularly interested in the aim attached to the Asilah Festival to substantially enhance – in contrast to a cosmetic gloss over – the situation of a city or of a community through art and culture. In order to make the changes clear to us, Mohammed Benaïssa explained the conditions in the city in the 1970s: "it was a disgrace, lots of garbage, the sewage was a total disaster, the walls had collapsed, no electricity…" Together with Melehi, he began to think of how to initiate some improvements and how to awaken the awareness of the population to contribute itself to a better quality of life.

When in 1978, they invited eleven Moroccan artists to paint murals in the town of Asilah, the inhabitants were not exactly enthusiastic. "At first no one took us seriously, but we launched the slogan: Culture and Art for development." Benaïssa and Melehi made clear that the painters had come because they thought that Asilah was a nice town and that it was necessary to combine efforts in order to make it into a beautiful city worth living in. The first step was to keep the place clean. Bit by bit, the infrastructure was improved, historical buildings were restored, and new cultural centers such as the Palace of Culture and the Hassan II Center for International Meetings were created for the festival. The Prince Bandar Library is opening this summer and resources are currently being put together to build an art museum.

Mohammed Benaïssa told us that the initial skepticism was rapidly forgotten since the inhabitants of Asilah soon made money with the festival, i.e. in renting out rooms to guests and with small trade. "We now have a generation of kids who were 8, 9 years old when the festival started, and who are now in their thirties. A generation who has opened its eyes and has been influenced by art, as a medium to enjoy life, and also to mobilize the resources of imagination and creativity – without imagination, without creativity, without a clear vision, no matter how many means you have, you don't bring about sustainable, viable development." Benaïssa added: "With art you cannot end poverty, but you can bring about the end of misery."

For the conservation and rehabilitation of the old town and for the model of what culture can do to improve the behavior and commitment of individuals in the enhancement of their own quality of life, Mohammed Benaïssa and Mohammed Melehi, as representatives of the Al-Mouhit Cultural Association, founded by themselves, were awarded the "Aga Khan Prize of Architecture and Urban Planning" in 1990.

From the first, the Asilah Festival was created as a dialog of cultures. During our talk, Mohammed Benaïssa remembered that it was also in a hotel in Bahrain that he first wrote down his ideas on this theme in 1978/79. At the time, art from the "South" was not recognized in the "North" and not known even. Benaïssa reckoned that there was a one-way road towards the North that led to artists and intellectuals to leave their countries in the hope of being able to attain international recognition. With the creation of the Asilah Festival, he wanted to contribute to the construction of a road in the other direction. Artists from all over the world were therefore invited to work together in Asilah. Benaïssa pointed out that "Asilah now, I am very proud to say, frankly, has been THE platform for the past 25 years to maintain a dialogue of all cultures, from Latin America, Africa, Europe, Asia, North America."

Mohammed Benaïssa, biographical note:
Born 1937 in Asilah. Studied Communication at the University of Minnesota, USA. From 1964, press attaché in Moroccan embassies in several countries. 1976-83 member of the City Council of Asilah. 1978, foundation of the Asilah Festival together with M. Melehi; from 1983 Mayor of Asilah. 1985-92 Minister of Culture of the Kingdom of Morocco, 1993-99 Ambassador to the USA, since 1999 Minister for Foreign Affairs and Cooperation of the Kingdom of Morocco.

Has taken place yearly since 1978, founded by Mohammed Benaïssa and Mohammed Melehi, organized by the Al-Mouhit Cultural Association.

Some of the events: Mural painting in urban spaces; workshops for graphic arts, ceramics, and painting – also for children; conferences; concerts; theater und other performances.