Adaptation of the Moroccan cultural festival in Bahrain to revitalize the cultural partnership with Morocco. 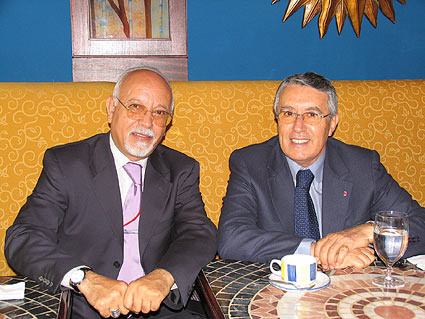 An international art festival has been held in the Moroccan city of Asilah [or Assilah, see note] since 1978 (see conversation with M. Benaïssa). Bahrain’s ruler, King Hamad bin Isa Al Khalifa, was so enthused by its character and lasting effect, that he initiated a similar event in his country as a revival of the cultural partnership with Morocco. The two founders of the Asilah Festival, Mohammed Benaïssa and Mohammed Melehi, stood by the institutions in Bahrain and the organizer there, Ali Abdulla Khalifa, both in word and deed during the organization of the first "Bahrain - Asilah Arts & Culture Forum".

According to the catalog, one credo of the organizers is to project creativity as a "focal point of dialogue between people on a background of political openness and democratic reforms that enhance the importance of culture as an instrument of development".

Exhibitions, workshops, parades, concerts, lyric poetry readings, etc., were held from 20 - 30 April 2004, with the participation of ca. 90 artists and intellectuals from 20 African, Asian, and European countries. As in Morocco, the most outstanding activities in the field of visual arts were the graphic arts workshop and mural painting in urban spaces.

During an international seminar on 26 and 27 April, art specialists and artists lectured on and discussed the characteristics and role of Arab art in today’s world.

Participants: circa 90 artists and intellectuals from 20 African, Asian, and European countries