Chant Avedissian: The adoring and the adored

The adoring and the adored. Group of works, presented in the exhibition "Love Affairs". 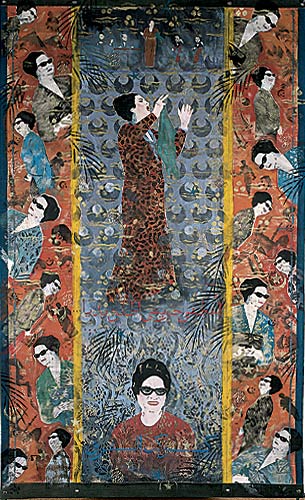 Chant Avedissian&apos;s monotypes, inspired by well-known images, reflect another type of love. His is a love of a bygone era — the Egypt of the 1950s, when its stars belonged to the whole of the Arab world. There are singers like the legendary diva Oum Kalsoum, "the Star of the Orient", whose love songs were written by some of the best poets of her time and are still at the top of the charts more than 25 years after her death; and her rival Asmahan, the beautiful Druze princess, whose marriages never lasted and who died in tragic circumstances. We find Oum Kalsoum&apos;s only rival in terms of popularity, president Gamal Abdel Nasser, the father of Arab nationalism, and King Farouq, the last king of Egypt, who abdicated in I952 at the age of 32. His sister, the beautiful Fawziyya, daughter, sister and wife to kings, and the pop star Dalida, before she became a blond in Paris. There are actors and actresses — Zaki Rostom, the "bad guy"; Fatem Hamama, "the honourable woman"; Hind Rostom, a sex symbol; the voluptuous dancer Tahiya Carioca and other famous entertainers of the golden age of Egyptian cinema. Their fans, the ordinary people of the time, also inhabit Avedissian&apos;s world, an optimistic, socialist-idealist era when Nasser&apos;s Arab republic provided a moment of hope for a better future, when there was plenty of work and women obtained the right to vote.

Avedissian integrates 20th century Egyptian iconography with pharaonic symbols, Islamic geometric and abstract patterns and the flowery baroque motifs of Ottoman decor. In his large stencils, images of historical characters, names, landscapes, objects and symbols intertwine and overlap. Painted with local pigments and bordered by hand-coloured textiles, they are celebrations of his nostalgic memories.

Treating subjects that have died is not an innocent choice. Most of his characters are figures from Avedissian&apos;s childhood. His work commemorates all that has been ignored by the Egyptian state for decades; be it a monument under environmental threat (Luxor, Aswan, the Valley of the Kings), famous streets, everyday objects, beloved animals, or famous people. With humour and a light touch, he reminds us of better times and a cultural heritage that should not be forgotten, one that belongs to Egypt and the entire Arab world.

Avedissian&apos;s approach is influenced by the Gandhi-like concepts of the Egyptian architect Hassan Fathy, with whom he worked for ten years. His fondness for popular art, Sufi poetry, Chinese and japanese Zen concepts and aesthetics, have resulted in his own version of a "Wabi-Sabi" lifestyle, one that he recreates wherever he goes in his peripatetic search.

Curator, art critic, author; specialized on visual arts and film from the Near East and North Africa. Lives in London, Great Britain.

© Text by curator Rose Issa from the publication accompanying the exhibition "Love Affairs" in the galleries of the ifa (Institut of Foreign Cultural Relations, Germany). Text and photos were both provided by the ifa-Galerie Stuttgart.

The works presented here are part of the exhibition "Love Affairs" curated by Rose Issa for the ifa Galleries in Stuttgart, Bonn and Berlin, Sept. 2003 - March 2004.