The question of Palestinian identity and existential metaphors in the work of the photographer. 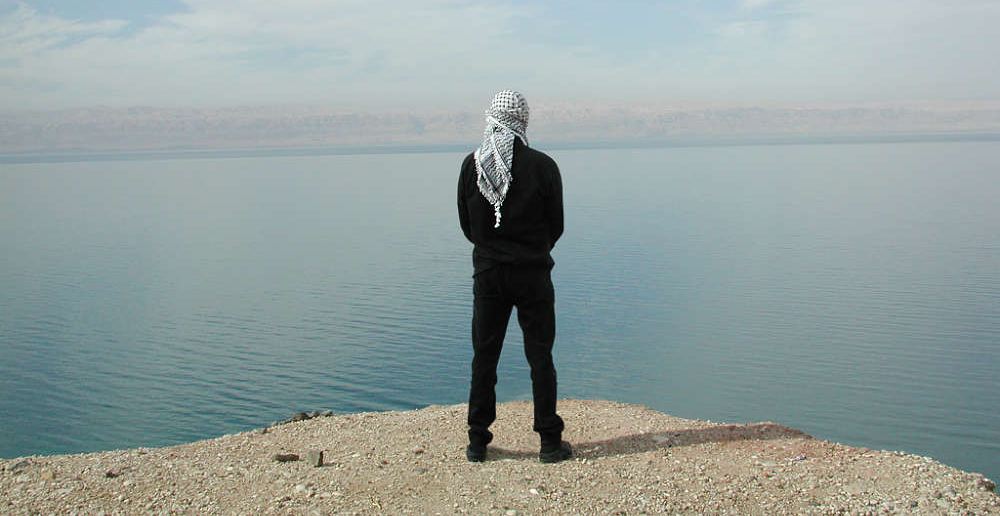 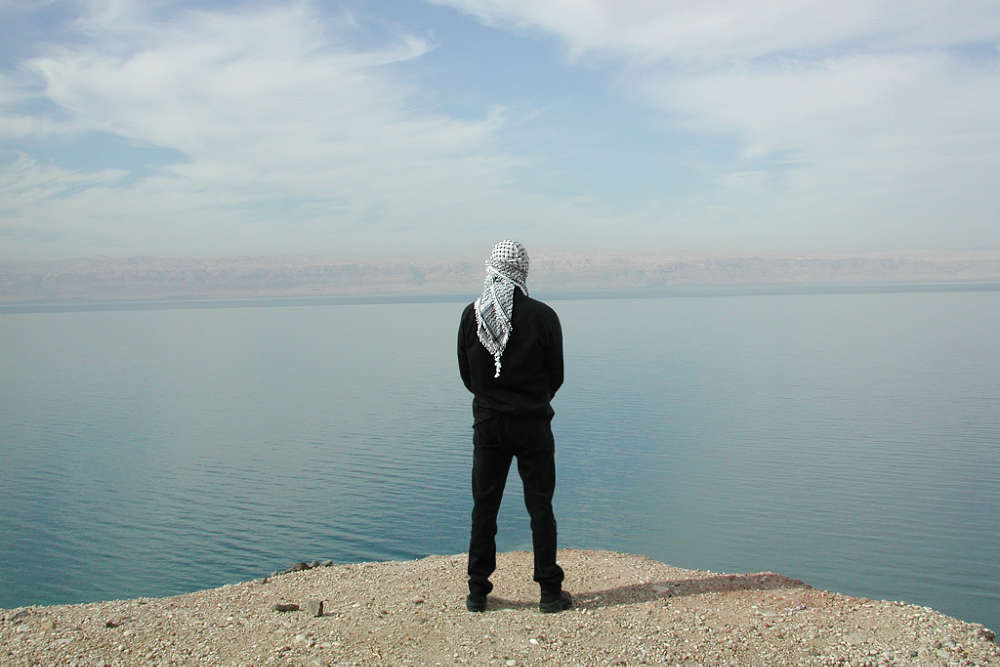 At the 6th Sharjah Biennale (April 2003, United Arab Emirates) the series "Self-portrait" by Tarek Al-Ghoussein was amongst those works that impressed us most. In light box photographs, he presented himself in various places with a keffiyeh around his head as if on a never-ending path. We got to know him personally when he walked through the Biennale with a group of students. He is professor of photography at the School of Architecture and Design at the American University of Sharjah (AUS) – the name, by the way, has nothing to do with the USA, but was given simply by the educational system. In our next issue, we will publish a major article on the school.

Thanks to Tarek Al-Ghoussein’s support, we returned once again to Sharjah in April 2004 to hold a lecture at the college where he teaches. This provided us with the opportunity to learn more about his approach and to see what he has been dealing with in the past year.

The visualization of his Palestinian identity – he was born in Kuwait and has never been to Palestine – has remained a constant in his work. But the new photographs are also existential metaphors. As Tarek Al-Ghoussein says, his series "Mounds" (completed at the end of 2003) is more intimate, already in format, than the large "Self-portraits" in the light boxes. Of course, one is immediately reminded of the fate of the Palestinians when one hears that the different types of "mounds" in the pictures represent "land" one is searching for, but is missing. But Tarek says he is dealing with something in a much broader sense – the impact of "barriers, land, and longing" on the awareness of identity.

In this context, we came to talk about the barriers that Israel has erected on the borders to the Palestinian areas in West Jordan, while simultaneously annexing additional areas. Officially, references are to a "defense wall", which implies that there is a need for protection from the people on the other side. Tarek Al-Ghoussein is interested in the manipulation of perspectives by means of linguistics and termini. He repeatedly demonstrates through his art how partial, stereotypical representations of Palestinians, Arabs, and the Islamic world appear in the western mass media. He knows them all too well, having himself lived for an extended period in the "West". His frustration in this matter is one of the reasons for which he returned to the Middle East. Tarek emphasizes, however, that he met many people in the USA and Europe, who do not think this way and he sees one of his tasks as a teacher to act as an intermediary between the cultures. It is precisely this personal experience in the West, combined with his Arab heritage that provides him with unique arguments in discussions with students. And he is very popular with them, as we were able to witness.

His latest major work "War Room" is a joint project with Chris Kienke, a friend from the USA, who also teaches at the School for Architecture and Design in Sharjah. In the first Iraq War in 1991, Tarek Al-Ghoussein photographed TV images from the news and reworked them artistically. He repeated this procedure – this time with a digital camera – starting in March 2003, when the second Iraq War began. He wanted to show how differently BBC, CNN, Aljazeera, Dubai TV and other broadcasters report the same event, thereby communicating a divergent understanding of reality to their viewers.

While switching back and forth between the channels, he noticed parallels between the "real" news pictures and the fiction of movies and cartoons, which is why he also included the latter in his zapping sequences. He told Chris Kienke about this and they noticed that, independently of one another, they had done almost the same thing. Out of this was born the idea to review more than 1,500 photos and develop a joint installation from those selected. The concept includes the thought that all the pictures, which we see every day and which substantially contribute to our judgment, have been subjected to a number of filtering processes and manipulations.