International workshop for contemporary art in Nuweiba on the Sinai Peninsula, Egypt. 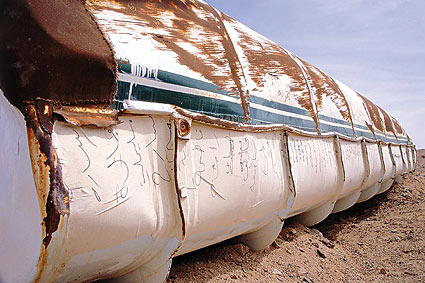 Reverberations of the precarious situation in the region have echoed through – and in some cases tainted – the Arab art world over the last season. Despite this however, the incipient contemporary Egyptian visual art scene has continued to develop, establishing itself on the world stage. 2003 saw the first three independent selections for the 50th Venice Biennale as part of the Fault Lines platform, the vision of Egyptian curator, Gilane Tawadros. On a local level, the Townhouse Gallery of Contemporary Art hosted its second Open Studio Project, whereby a group of 20 local and international artists are provided with studio spaces in the heart of Cairo’s bustling metropolis.

With issues of representation continuing to haunt local artists, such initiatives have become essential in developing a link between what is at play locally and what fashions the international scene. Wasla contemporary art workshop is part of this desire to move away from projects based on cultural exchange and towards those, which concentrate first and foremost on interaction between artists and art scenes. Wasla – the word appropriately means ‘connection’ – was essentially about linking the Egyptian art scene with other less familiar ones.

In association with the Triangle Arts Trust in the United Kingdom and with additional support from the Ford Foundation, a team of four artists – Mohamed Al Riffai, Iman Issa, Hassan Khan, and Basim Magdy – led by Egyptian curator Mai Abu ElDahab, embarked on a thorough selection process. Rather than targeting particular artists or media, they invited candidates to submit applications. This resulted in a wider, and much more varied pool to choose from, and one that best corresponded to the diverse interests of the selection committee. The final selection succeeded in introducing local artists to a number of international names with which they had previously been unfamiliar, thereby reinforcing the identity of artists, whose work defies simple categorization by using and combining several media.

From the onset, the focus was discussion and process rather than product. The location of Wasla was an essential component of the workshop’s mandate and potential success. The point of encounter for the eighteen artists concerned was in Nuweiba, Sinai. There, in almost overwhelming isolation, they were to spend two weeks, forced to fill the void through interactions with each other and the surrounding environment. The feeling of displacement was the unifying factor since they all found themselves in an unnervingly alien working environment, forced to apply their limited resources in order to fill the devastating silence and seemingly endless space.

Responses to this sense of displacement and to the natural surrounding vastness varied amongst the participants. There were those who found the confines of the camp too restricting, choosing instead to venture down the desert road, into the local community, or even further into the silence of the looming mountains. Interested in public intervention, Iraqi artist Mohamed Abdullah strove to include the neighboring town in the workshop. Putting up road signs leading the artists through a performance piece advertising the workshop in Nuweiba, Abdullah subtly manipulated the boundaries between artist and audience, while simultaneously creating a sense of community, both amongst the artists, and between them and the locals.

In a similarly subtle manner, Egyptian artist Rehab El Sadek drew on the local community in her discussion of gender constructions by turning a discarded water tank into the embodiment of gender politics within neighboring Bedouin societies.

In stark contrast, Iman Issa’s ‘golden house’ acted almost as a signal for the location of the workshop. The cube like structure covered in glittering gold paint sparkled in the bleak sun-bleached landscape, out of place, but beautifully so.

Palestinian artist Jumana Aboud brought the local community into the campsite through her collection of fabrics, donated by women from the local village. Stuffed into the cracks of the camp walls and surrounded by sketch paintings, the fabric became the much-needed connection with the outside world.

The tenuous relationship between the outside world and that of the workshop resonated throughout much of what was produced. Essentially, it was about taking time to discuss, almost in isolation, art practice – and this is especially significant in a country like Egypt, where much of what is produced exists in a vacuum with little in terms of criticism or a discourse surrounding the work. The outside world was ever present, with artists unable or unwilling to distance themselves from it, particularly since the workshop commenced at the same time as the coalition forces’ attack on Iraq.

Has studied and worked in Cairo for several years, writing for local and international publications. She is currently doing a PhD in Arabic Literature at Columbia University, USA.

We wish to thank Dina Ramadan, The Townhouse Gallery of Contemporary Art, Cairo, Brian Wood, and the artists for providing the illustrations.