Traveling exhibition organized by inIVA (London) on the theme of the veil and veiled women. 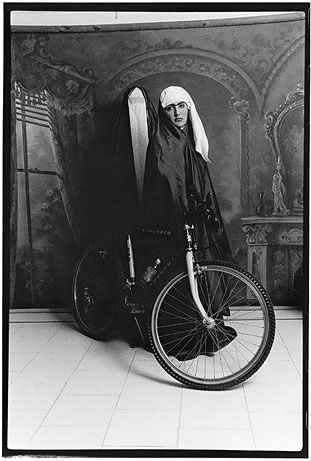 In Walsall, a town near Birmingham, whose greatest pride is the production of leather goods, was, in February, the starting venue for a traveling exhibition from the London inIVA on the - as soon became apparent - delicate subject of "veils".

Gilane Tawadros, the Director of the Institute of International Visual Arts and one of the curators wrote, "After September 11, the veil has become a synonym for cultural and religious differences which are continuously displayed as insurmountable, alien and terrifying. The fact that the veil and being veiled was for thousands of years a part of western as well as eastern culture has done nothing to reduce its articulated associations with Islam and an abstract exotic idea of the orient."

The "Veil" project was, however, conceived by the artist Zineb Sedira long before September 11 2001 and she has been developing it with her colleague Jananne Al-Ani and two other curators, David A. Bailey and Gilane Tawadros, for the last four years. 20 artists deal with the subject in all its complexity and ambiguity, and question simplifying cultural interpretations. Newly commissioned works form a dialogue with older better-known pieces.

Although the spectrum of contemporary artistic practices is present in the exhibition, the emphasis is placed on lens-based work. The project intends to investigate the role that photography, film, and video play as contemporary tools in the recording and communicating of veil concepts. This point is corroborated by a historical section, which will include the film "The Battle of Algiers" (1965) by Gillo Pontecorvo, photographs by the psychiatrist and photographer Gaëtan de Clérambault, and pictures taken by Marc Garanger of women forced to unveil for French identity photographs, taken whilst Garanger was a soldier during the Algerian War of Independence (1954-62).

Even before the opening in Walsall, Council officials insisted that two photographs be removed from the exhibition. See the inIVA press release for information on this act of censorship and reproductions of the two pictures.

It is hoped that local authorities in the subsequent venues are less anxious.