Art historian, painter, curator. Founder of the Jordan National Gallery of Fine Arts and the Royal Society of Fine Arts. 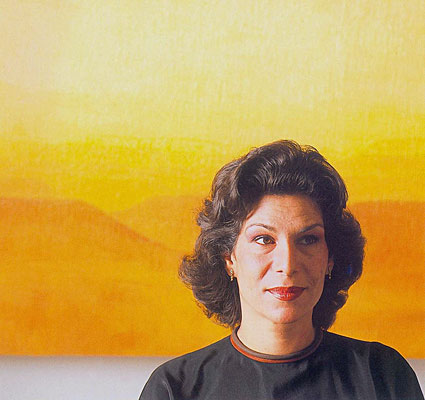 Haupt & Binder: We read that you were the first woman to enter the Ministry of Foreign Affairs in Jordan, and the first female diplomat to represent Jordan at the UN. What made you leave the diplomatic world for the art world?

Wijdan Ali: When I joined the Foreign Office in Jordan, I had just finished my undergraduate studies in Middle Eastern History. I sat for the entrance exam without telling my family, who only found out after I had passed. My mother said that I could enter the diplomatic service under the condition that I did not take a post abroad. We are talking of Amman in 1962. However, she made the exception that I could attend meetings abroad. When I got married in 1966 I resigned, because my husband was in the army and again it was impossible for me to serve abroad. At this point it would have been ridiculous for me to continue as a diplomat without ever taking a post outside Jordan. And meanwhile, I had seriously taken up painting, and eventually found myself utterly involved in art.

H&B: You established the Jordan National Gallery in 1980. Was it a long process to reach this goal? Was it based on an existing collection? What is the role of the Royal Society of Fine Arts?

WA: I would say it was a long evolving process which led to the establishment of the Royal Society of Fine Arts, and eventually the Jordan National Gallery of Fine Arts. Being a female painter from the developing world, I found that it was difficult for me to show my work abroad, and the same was true for other artists from the Third World. In the 1960s and ‘70s one had to emigrate and become a citizen of a Western country to be accepted as an artist on the international scene.

Consequently, I wanted to establish a venue for Arab and Islamic artists where they could show their work and be evaluated according to their own aesthetics, without having to shed their skin. This was and still is one of the main functions of the National Gallery. I began with a modest collection: (77 works) of contemporary art from the Islamic world, which I donated to the Gallery. This became the nucleus for its present permanent collection of more than 1800 works.

As for the role of the Royal Society of Fine Arts, its main function was, is, and I suppose will always be, to encourage cultural diversity, disseminate artistic knowledge, and promote art from the Islamic and developing worlds.

H&B: Besides the Jordan National Gallery's focus on contemporary art from the Islamic World, was the idea to include art from the developing or transforming world part of its program from the beginning? Why was this decision made?

WA: We started small at the inception of the National Gallery, so the first area to build a modern collection from was the Islamic World. It did not take long to cover that region, so we immediately moved on to the developing world so as to introduce the region’s art among its own countries and to the rest of the world. For example, we in Jordan were not familiar with modern Armenian art before the exhibition "Chariots of Fire: Contemporary Art from Armenia", held at the Gallery in 1999.

It is rather strange that, in order to avoid and end conflict and belligerence, governments resort to signing mutual agreements. Yet no matter how many political, economic, agricultural, educational, and military pacts and agreements exist between nations, there will be no peace if mistrust remains the prevailing and overwhelming norm. And cultural ignorance is the main incriminating factor that breeds mistrust among us. We strive in vain towards a cleaner and greener earth, only to destroy with disdain human achievements unfamiliar to us. Nor is it enough to give priority to relief work and economic aid, yet deny human beings their aesthetic needs simply because they differ from ours.

We have to reach out in order to attain a basic and exigent goal: the promotion of world peace through the advancement of the arts and the eradication of cultural apartheid. We should all strive to learn and accept our humanizing differences, and judge other traditions according to their own values and aesthetics which fall within a broader humanitarian order. By spreading acceptance and forbearance and supporting those who do so, and through learning and beauty, we will be able to contribute to the future of our world.

The Society allows the diversity in our cultures to flow and to unite us, for cooperation based on recognition and respect is no longer a nuance or a matter of civility between nations. Economic development alone is certainly vital to a world whose values and priorities are global and material-based. However, we must strike a balance by developing culture that will in the future lead to the realization of our spiritual development. This is the main objective of the Society and the Gallery.

H&B: It is impressive to see how active the gallery is in organizing travelling exhibitions to other countries. Is this because you believe in the role of art as "ambassador" between cultures?

WA: Art is not only an ambassador between cultures. It is an integral means of communication between people that supercedes many barriers such as language and stereotypes.

H&B: An article on the website of Emory University (USA), published in 1995 in relation to the Atlanta exhibition of "Forces of Change: Women Artists of the Arab World", is entitled "Jordanian princess challenges belief that Islam threatens the western world", and you are quoted as stating: "This exhibition is one way of sending our signal to North America that we want to have cultural interaction". Do you think that this "signal" was heard by anyone at that time?

WA: Of course it was heard by all those who visited the exhibition. The decision makers might not have received the "signal", but many who did reacted to it positively. After the exhibition "Forces of Change: Women Artists of the Arab World", I was invited to be a visiting lecturer at Agnes Scott College, to talk about subjects related to Islamic civilization, including art and gender. I thoroughly enjoyed my meetings with the students, and the questions and debates which followed. I learned a lot from them, and truly cherish the memory of those encounters.

H&B: Currently touring, the exhibition "Breaking the Veils - Women Artists from the Islamic World" has a clear message since it shows works created by Muslims, Christians, Buddhists and Hindus living in the Islamic world. How has the audience's reception been so far? Have you noticed differences between the countries where it was shown?

WA: So far, "Breaking the Veils - Women Artists from the Islamic World" has toured Greece, Spain and was in Paris, where it had the same positive reaction on all levels. Starting next June it will go to Italy and Portugal, among other European countries, before traveling to the United States.

H&B: What was or is your greatest challenge, either as an artist, art historian, educator, curator or editor?

WA: My greatest challenge is facing ignorance, be it in my society regarding the importance of art, or abroad regarding my religion and culture.

H.R.H. Princess
Wijdan Ali
Art historian, painter, and curator. Founder and driving force of the Jordan National Gallery of Fine Arts and the Royal Society of Fine Arts. Her artistic name is Wijdan.