Architectural-acoustic installation inspired by the Pergamon Altar and its famous frieze of the battle between Gods and Giants, brought to Berlin at the end the 19th century. 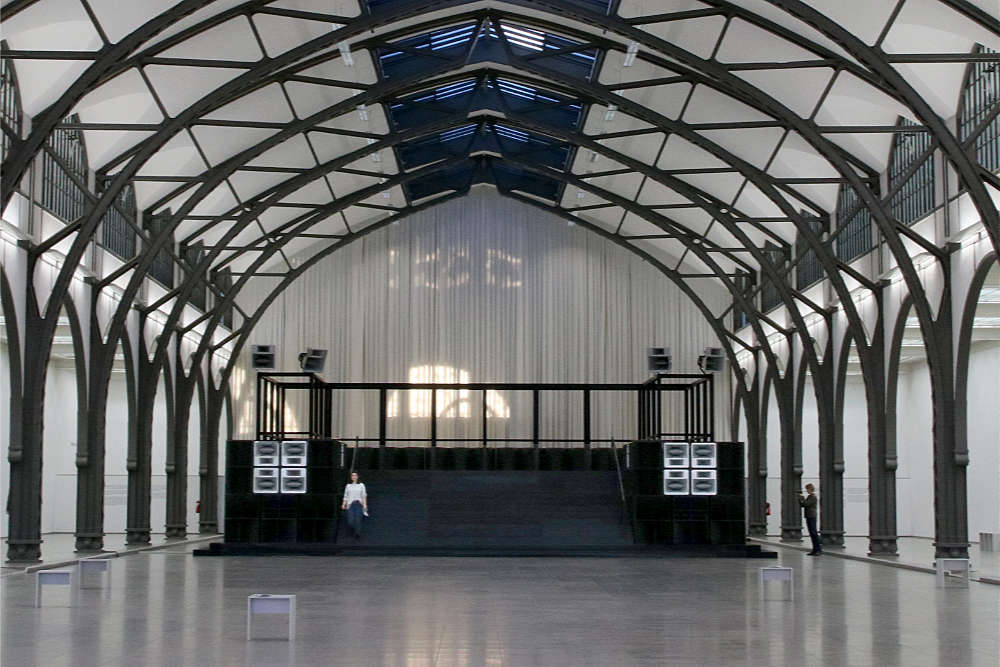 In Bergama Stereo, an architectural installation with sound, the Istanbul-based artist and musician Cevdet Erek references the form, the historically attributed function and the ongoing reception of the Pergamon Altar, now located in Berlin, and creates a new interpretation of the famous Hellenistic edifice.

Bergama is the Turkish name for the ancient city of Pergamon as well as the contemporary city and district in the province of Izmir. In ancient Greek, the word "stereos" originally meant "solid". Here it stands, among other things, for the method of multi-directional and perspectival sound reproduction – an analogue to natural hearing. Typically, in audio playback and in amplification systems for live performances, stereo sound arises through the symmetrical placement of two single loudspeakers or two groups of loudspeakers. In Bergama Stereo, this audio-visual aspect is associated with the symmetric architecture of the Altar and its two wings. The Pergamon Altar’s proportions are slightly transformed on a reduced scale of roughly 1:2. The Altar’s famous frieze of the giants and gods is interpreted through a multi-channel composition that fills the room with sound. Here, sound assumes the central role that visual elements play in the original Altar, creating a multi-dimensional narrative.

The sculptural frieze is replaced by a large loudspeaker frieze that projects a composition into the space via 34 separate loudspeaker channels. In analogy to the fragmentary remnants of the original Pergamon frieze and its supporting elements, which were reconstructed from archeological finds, active loudspeakers alternate with empty loudspeaker casings. The new acoustic frieze interprets and transforms the depictions in the historic frieze in multiple ways: The battle of the Olympian Gods with the underground giants, who rebelled against their rule, is interpreted through multi-channel, spatialized sounds indicative of various present-day struggles, enabling the audience to experience them in a novel, abstract mode. It has aesthetical responses to last decades' electronic music and club culture in Berlin as well as to specific instruments like the bass drum davul and dance rhythms of the Bergama region. 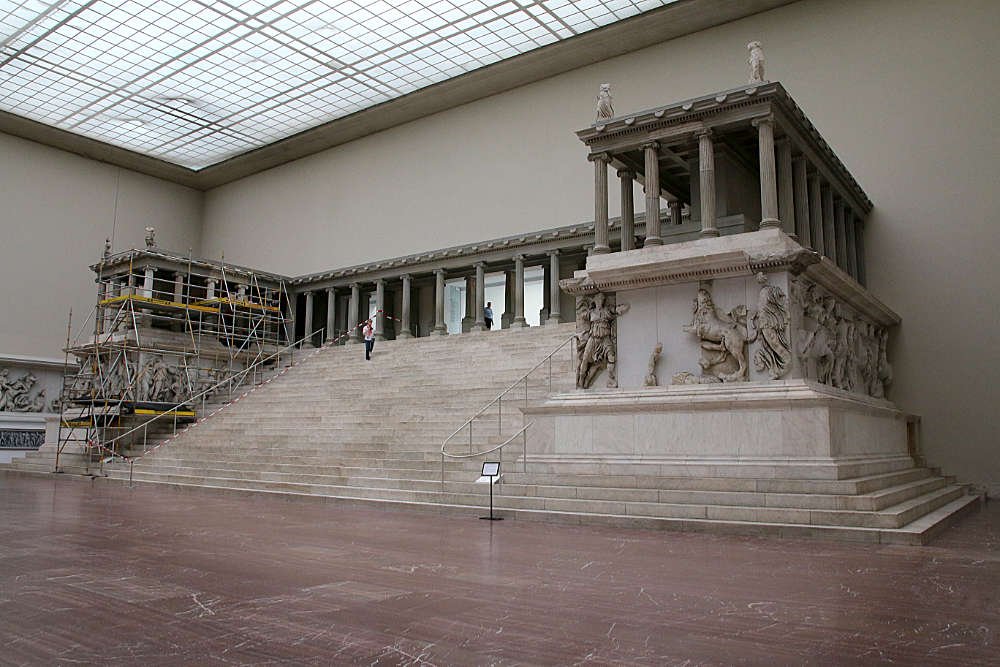 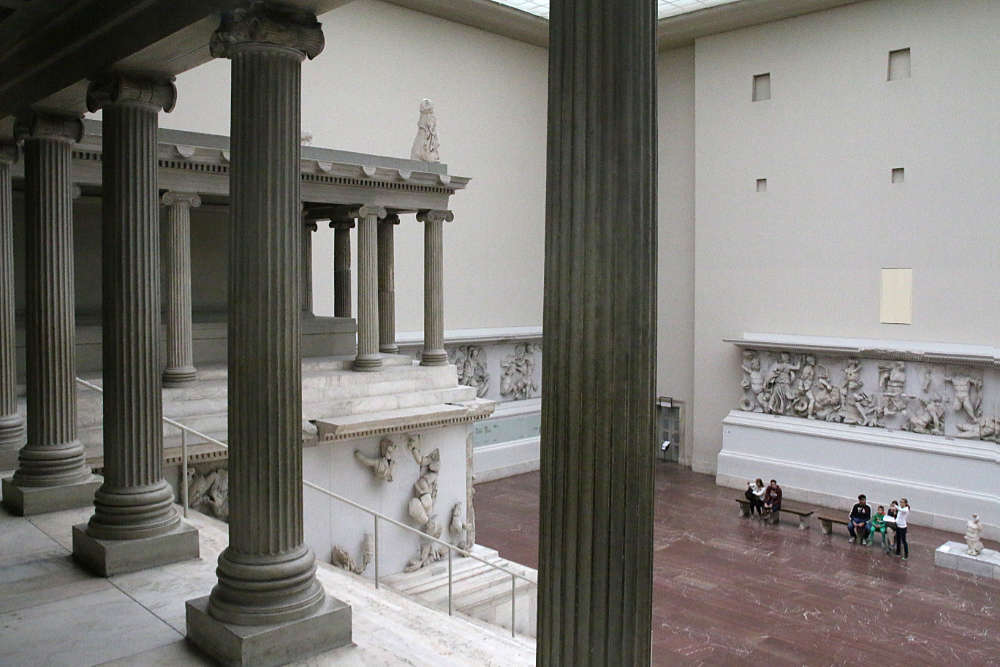 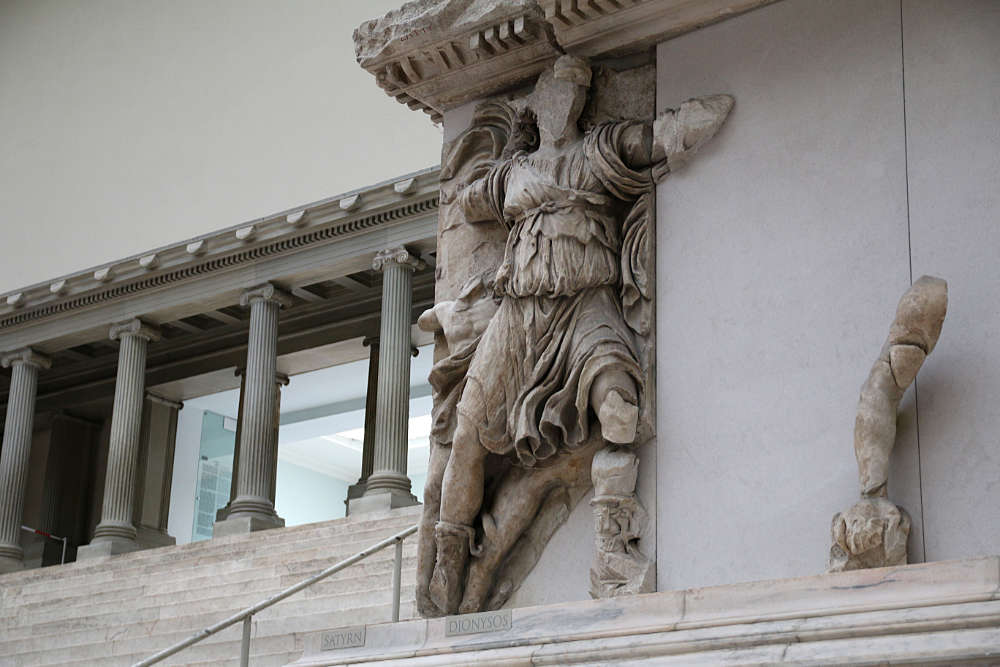 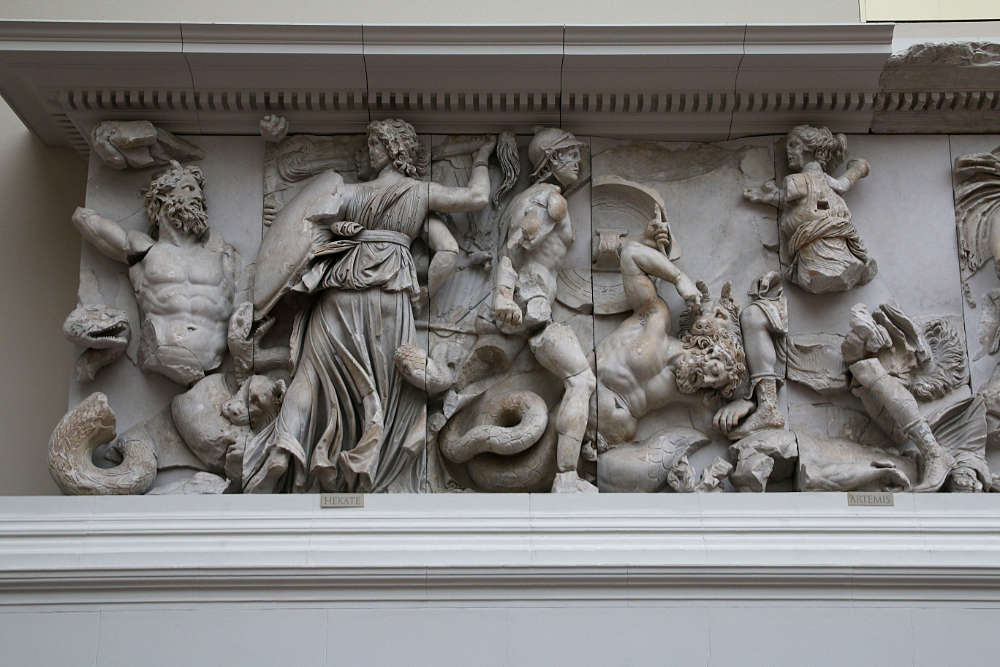 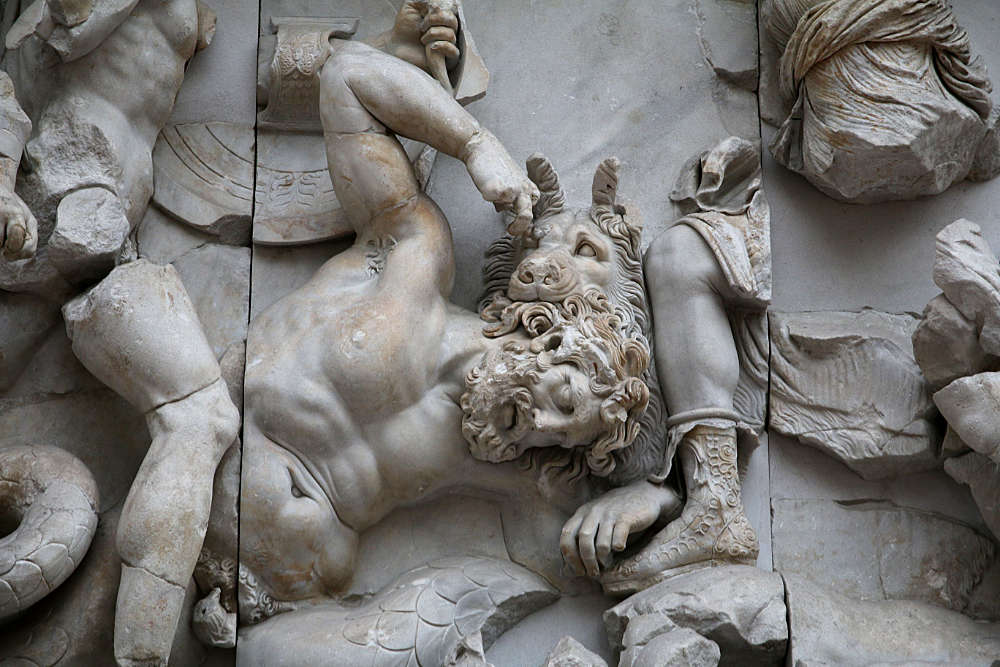 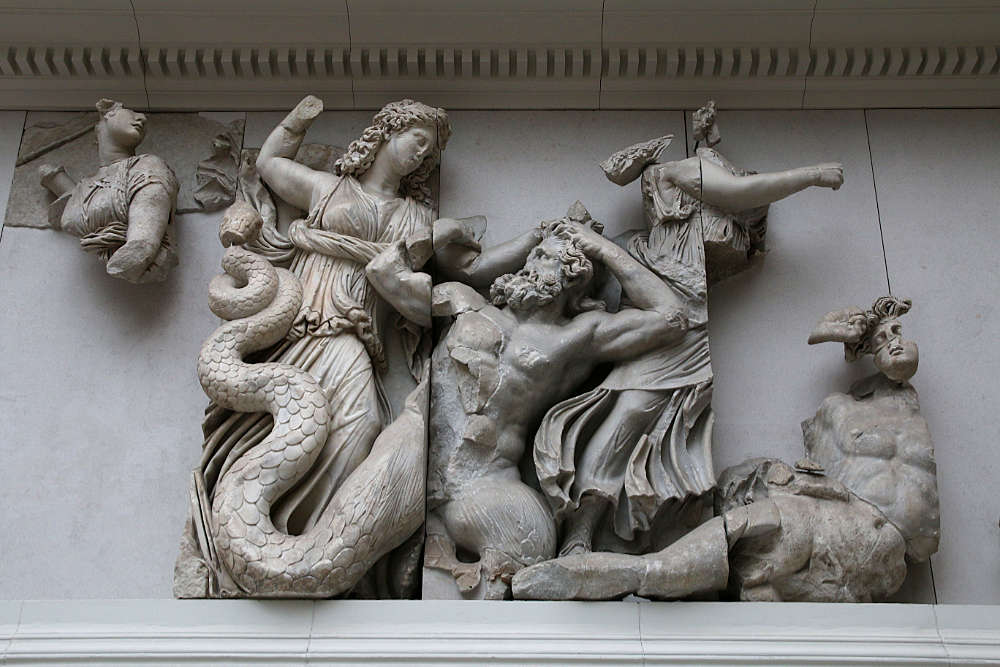 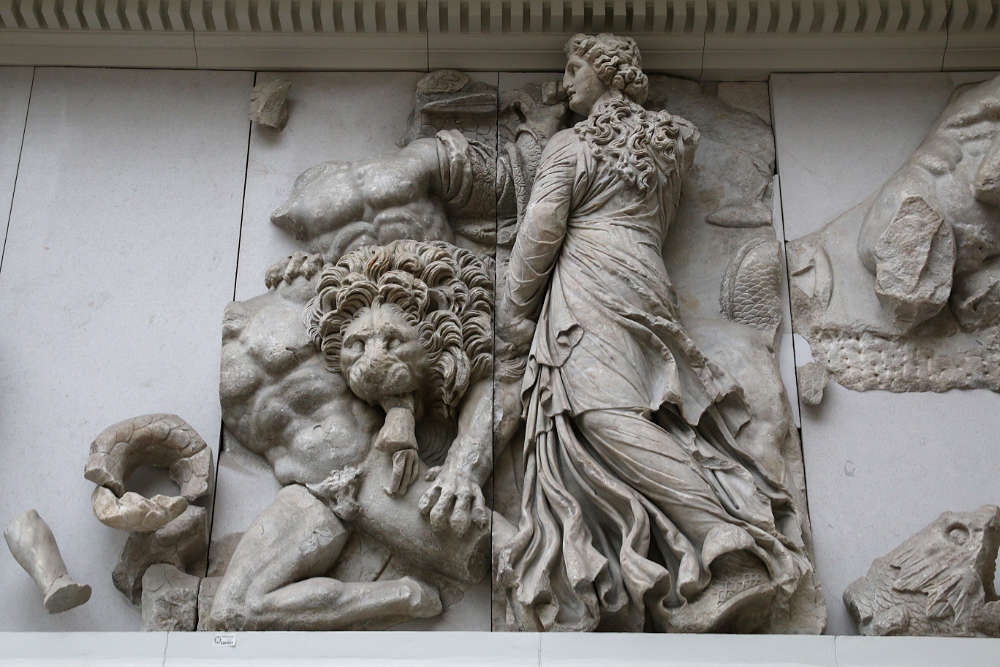 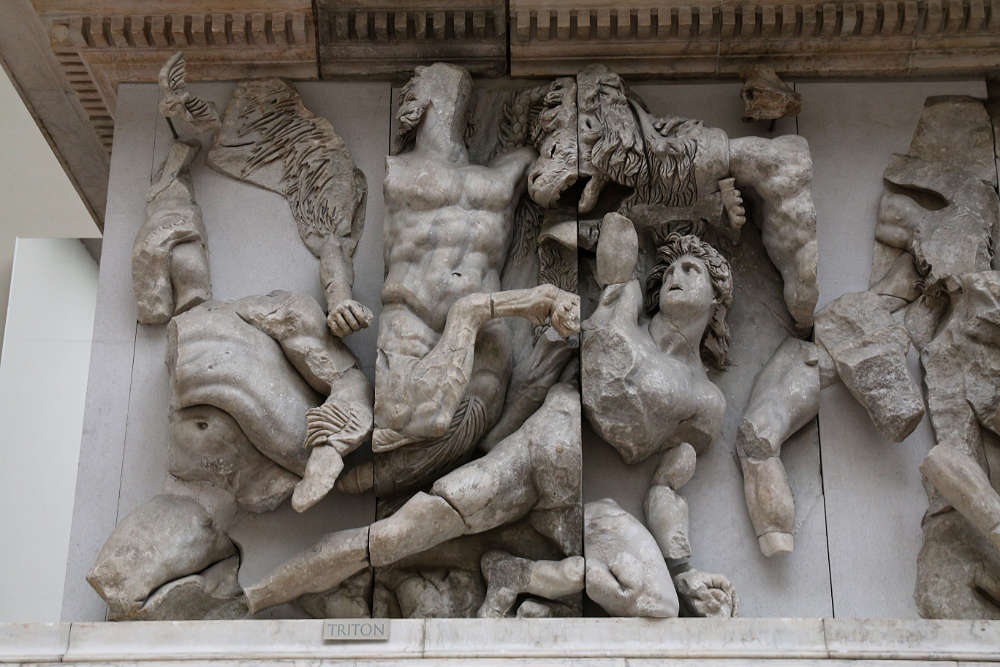 Interpretation of the Pergamon Altar

The Altar’s famous frieze of the Giants and Gods is interpreted by the artist through a 34-channel composition. Fragmentary relics of the Altar were transported from their original site in present-day western Turkey to Berlin late in the 19th century. “Bergama Stereo” is a site-specific work and the visitors’ movements and listening activities determine how the composition is perceived.

In the newly founded German Empire, as of the 1880s, the great significance attributed to the Hellenistic site was closely linked with a flourishing appreciation of antiquity in science and culture. Beyond that, the Altar played an important role in the cultural competition between the German Empire and other great European powers, and ever since, has had a unique history as a source for other artworks and debates and as a participant in world events. A museum expressly designed for the Altar was opened in Berlin in 1901; it remains one of the city’s most popular museums. The Pergamon Museum is currently being renovated, meaning that the Altar is removed from public view for several years.

After the first presentation of the work in Bochum during Ruhrtriennale 2019, Bergama Stereo is on view in Berlin as part of the series "Works of Music by Visual Artists". In Berlin, as in Bochum, an integral component of the presentation is the concert and performance program in the exhibition hall. The program picks up on themes and structural aspects of the architecture. Musicians have been invited to relate to characteristic features of the installation such as symmetry, balance, contradiction and the content-related aspects of the work such as history, ritual, power, struggle, conflict, expulsion and migration.

Information about the exhibition and program

Audio-visual performance by Cevdet Erek
5 March 2020, 6:30 pm - 7:30 pm
With an audio-visual journey of sound, images and performance, he will evaluate the past and future stages of the project from Bochum via Berlin and upcoming Istanbul.