And when do the disappeared return? Each time we think of them 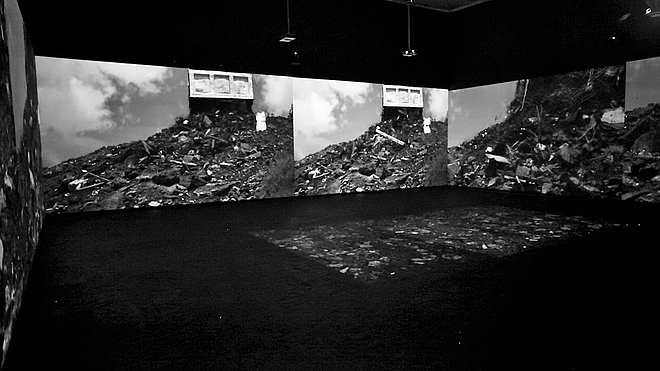 Duelos is the inaugural piece of the space/work Fragmentos, a project conceived by the artist Doris Salcedo as a counter-monument and a place of collective mourning, as well as an exhibition space [1]. As is widely known, Fragmentos arose from the peace agreement between the Santos government and the FARC guerrillas, and was created under the specific mandate that the metal products of melted weapons be used to create a sculpture [2]. Salcedo presents an ‘inverse architecture’ [3], leaving open the ruins and remains of what was originally a built area to construct upon the original courtyards of a colonial house in the historic center of Bogotá, covering the entire floor with metal tiles made from the metal of the weapons [14]. The irregular texture of the tiles is the result of a collective and therapeutic action, a ‘sculptural catharsis’: female victims of sexual violence perpetrated by different actors of the conflict hammered their anger and frustration into the aluminum plates to give shape to the casting molds. As a result, each tile is unique, just as is the case for the story of each participating woman. 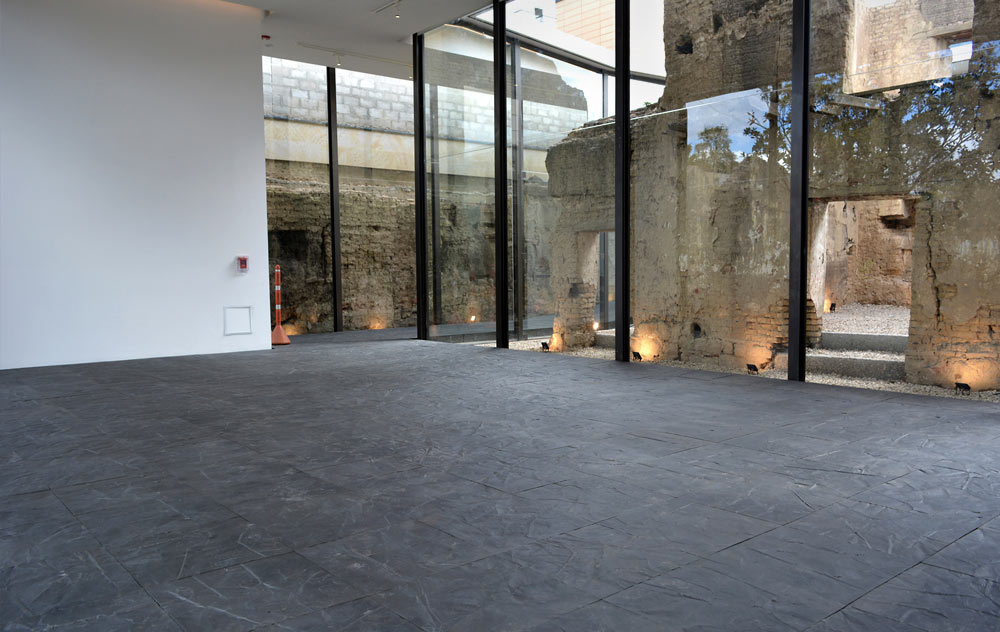 Salcedo's strategy for involving the viewer comprises a refusal to erect a sculptural piece that might be perceived as an object, as an outside. In Fragmentos the viewer exists inside the work. He is involved with all his corporality, he has no choice but to walk upon the work, and he can only live the experience if he agrees to become immersed in it. In a war waged by poor youths in rural areas of the country, and experienced by the rest of us through the media from the comfort and relative safety of our homes, Salcedo’s gesture is truly transgressive. Fragmentos constructs a participant viewer who is unable to escape from the most disturbing implications of the work.

Like Fragmentos, the work that receives it, Duelos also proposes an enveloping space that occupies the walls and the floor; one in which the viewer can be found immersed, inside and involved. The absence of color removes any anecdote from the image, giving it the grave and somber tone of testimony. Sound is the protagonist here. Just as the unspeakable will always move in the indeterminate space of rumor and truths will unravel in a multitude of fragments mediated by political expediency, the sound in Duelos is not univocal or hierarchical but as-saults the participant from multiple points of speech. Sometimes surreptitious, like the unintel-ligible whisper of many voices trying to make sense of what is by definition inexplicable, sometimes frontal and forceful as the thunderous noise of the machine, of the rubble falling down the side of the mountain, and of the earth crunching under the weight of the successive layers of (history) material. Resistance is improbable. We can always close our eyes to avoid involvement with the unnamable, yet covering our ears is much harder.

La Escombrera, a place referred to in Elegía, is also the starting point for Duelos. It is a huge mountain built with debris from the buildings and demolitions of the city of Medellín, materials that in themselves bear witness to the death of architecture. As mentioned earlier, it was there that the bodies of the victims of several military operations and subsequent forced disappearances were buried [5]. After three lustrums of uninterrupted filling, the dump has become a huge manmade mountain that, with its geological proportions and accumulation, layer upon layer, of cultural material, poses a paradox: everyone knows that the bodies are there, hidden in plain sight, but they also know that it will be almost impossible to exhume them. The reluctance of both the authorities and the operator of this iniquitous dump – a privatized site, as happens in liberalized economies where there is a constant loss of public facilities – prevented the search for and exhumation of the corpses when it was still possible. Today, after years of incessant filling, it is almost technically and financially impossible to carry out the search [6]. When in 2015 a very hard-fought initiative was finally brought before the state by the families, the Prosecutor's Office agreed to remove debris in order to search for the missing bodies. At the same time, Echeverri traveled to the site to witness this effort to claim truth and justice on the part of civil society. The resulting collective action that took place in the Escombrera was at least a symbolic conquest. As Echeverri points out, ‘when the earth is touched, physical areas are marked that destabilize presence in a territory that is not only physical but also affective, this again produces hopes, bringing the past into the present and stirring family histories.’ [7]

Duelos doesn’t contain an argumentative narrative but a dramaturgy. The piece begins with projections on the floor of the site (once again, it should be remembered that this is not a neutral material: Fragmentos is the opposite of the so-called white cube). Duelos tries to communicate the sensation of the smallness and impotence of the spectator before the enormous scale of the mountain-cemetery that inhabits the exhibition space with visual and auditory images. The sound and the penumbra set a tone of gravity that, despite the size of the projections, manages to move the work away from any association with a show. The smoky ground creaks and seems to contain something that moves. This ‘telluric pain’ [8] is accompanied by murmurs, whispers, snippets of words and phrases that are barely enunciated. Cascades of voices fall like broken glass, pieces of life that are broken forever. Next, the ascent to the top of the mountain by the dump trucks, full of debris, begins. The subjective camera pursues the truck from different points of view, always slightly off center, thus producing a sense of anxiety and disorientation. We see through a low-angle shot the slope of the mountain where the dumping of the rubble is evident, as it rolls down the slope. The avalanche arrives in successive waves and does so incessantly. At times a continuous bass, akin to a lament, accompanies the avalanche. Ascension, fall...is the memory a form of resurgence? As is understood by those who insist on remembering the names of the victims, reincarnating the body in the present is a form of resistance to power because, as the victimizer knows, when the body disappears, the act of mourning becomes impossible, or at least difficult. The bodies, although absent as an image, are implicit in Duelos and we, the spectators of the work, can try to participate in this mourning for the others. Placed symbolically at the base of the mountain, watching the rubble roll towards us, we can ask ourselves: How do we talk about the disappeared person? Any conclusive answer remains elusive, yet we can venture to give one: with our emotions tightening inside [9].

How to finish a text about an artistic work that doesn’t propose conclusive judgments and which is considered an open work? Echeverri poses more questions: ‘At this point it is im-portant to consider the body in relation to memory and war, in order to clarify how the body is part of spatiality within these contexts. When we know that physical violence is literally exerted on bodies, what then happens to the body at the time of remembrance? How do you get involved in the narration of violence? And if it is also space, how can we involve it in the spatiality of violence? How does war also make the body a spatiality and/or a place of memory? [10]

(Extract from the text published in the book DUELOS that accompanies the exhibition.)

Curator based in Bogotá. Artistic Director of FLORA ars+natura

Video installation of nine projections in synchrony, that, united to three sonorous levels, embrace the room and evoke an endless mourning in Colombia because of the forced disappearances.

The work is complemented by a search book to receive testimonies from mourners, which will remain in the archives of Fragmentos. 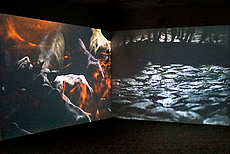 The large retrospective at the MAMU, Bogotá, presents her sharp and thoughtful work, deeply rooted in its social and epochal context.