Tunga about his work at documenta X, 1997

The Brazilian artist talks about his performance piece at Kulturbahnhof and its context. Written down by Pat Binder & Gerhard Haupt after an interview. 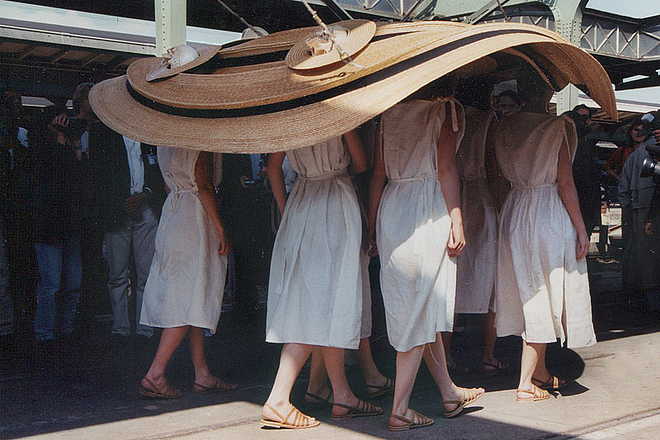 Points of Departure for the Work in Kassel

One point of departure for my work in Kassel was the piece which I presented in New York for the 10th anniversary of the Tschernobyl catastrophy. The piece is dedicated to the rescue team who took on the most dangerous tasks. It’s a parody on a nuclear particle accelerator in the streets of New York. In an area which is very busy on Saturdays and Sundays, I had seven men walk around in the pattern of a Moebius-loop. They walked continually in the same direction, so that their paths would cross at a specific point. The seven were dressed in white shirts and jeans, and each carried a suitcase. Every time two would meet, the suitcases opened, the contents fell out, and a photographer took a picture. It was a perfect parody on a nuclear accelerator, in which two particles (in this case two of the men) collide, and what happens in the nucleus is captured in a photograph. The suitcases’ mysterious contents were fragments of a human body, without the torso, which means without the sexual organs. After they scattered across the floor, the men picked up the gelatin-covered fragments, cleaned them, and put them away in the suitcases as if nothing had happened. Body parts in a suitcase recalls thoughts of a classic crime. Here is presented the connection between an individual crime, coming from the mystery of human passion, and a great crime against humanity, resulting from the logic of science. A text accompanies the performance, which describes it as though it were a scientific event.

The Two Hats as Temples

A further point of departure for the work in Kassel was the large hat which I had seven young women wear at the Biennial in Venice. The womens’ skin and hair color [this is a point which both the dX-Guide and the press explicitly brought up again and again - note by UiU] always depend upon the country in which the performance takes place. In Venice, it was seven Venetians, and in Kassel I also chose seven young men who looked typically German. The young women were very blonde and very beautiful, which reminds one immediately of the Caryatides, the supporting figures of antique temples.

The hat is for me like a temple or holy place, like Delphi with its oracle and its fortune teller. In Venice, I parody a specific context because the work was part of the exhibition An Avant-Garde Walk in Venice (1995). For Kassel, I constructed a third element: a hat made of felt. Both hats, both temples, differ in material, character, and in the construction. The one made of straw is like a spiral, and inspires thoughts of lightness, temporality, eternity. In comparison, the other is a hat of felt, and gives the feeling of pressure, like an immovable block of time. The felt temple is basically "carried" by body parts which are suspended from the ceiling, as the hat itself hangs upside-down. There is a connection between this hat, the men, and the contents of the suitcases which are spilled, or "ejaculated" in front of the young women, in front of the "walking temple".

The Artwork as an Oracle

I see this work as a kind of oracle. For me, it is the return of the divination, of the sacredness in art. The hats, for instance, hang from the huge wooden crosses used for controlling marionettes, and there is a gesture of "freeing" the temple from the "hand of God". Each time an observer perceives something, this something becomes a part of his/her fate, whether s/he like it or not. The range of this incorporation depends upon the disposition of your fate or your own will to understand what you are seeing. The reintroduction of the concept of destiny and divination in art goes in this direction, and this is one of the most important elements of my work.

Inside Out, Upside Down

There are two further elements which I haven’t yet named, and which apparently are not as obvious. During the performance, music is played: a piece from a classic chanson by Charles Aznavour, which endlessly repeats "Que c’est triste Venise...". That is an explicit reference to Venice; one shouldn’t forget that the Biennial was opened just shortly before the documenta. If Venice is meant to be sad, just imagine Kassel! The other music is related to the felt hat. It’s by a popular Brazilian singer who sings a text by Hermes Trimegisto - actually just a chemical formula, which sounds peculiar in a samba rhythm. In fact, one hears only the chorus: "what is beneath, is like, what is above, is like, what is beneath, is like, what is above, is like... " The combination of these two musical elements result in the title of my work: "Inside out, upside down".

That’s hardly mentioned, though. There seems to be a silence surrounding everything which could be anecdotal. I find that very odd, but also interesting. I actually prefer that my work be seen in its orchestrated form, as a symphony of complex information which cannot be solved by one single reference.

On the Value of Intuitive Perception

A few years ago, I learned that one can speak about problems and difficult subjects with people who have no aesthetic culture, even - although on different levels - at the same time as with people who have an in-depth cultural education. I’ll name an example: in an exhibition, I once showed a film-loop of a tunnel, accompanied by Frank Sinatra’s Night and Day. One visitor stood in front of it for hours, as if hypnotized. I approached him and asked what was wrong, and he told me that he had recently been operated on and had experienced clinical death, which he remembered exactly as this endless tunnel. The work had reminded him of that moment, something which he was very thankful for. I spoke with him some more, and although he was a very simple person, he had a spontaneous, intuitive knowledge of the themes I was concerned with in my work: the idea of continuity, circulation, timelessness. An exhibition like the documenta has to deal more respectfully with people who aren’t specialists, who aren’t initiates. I am convinced that a density can be achieved and made accessible through communication.

I believe that a great mistake is made in the way Soma and Psyche are separated here in Europe, a result of the over-importance of reason. This also affects the view of art from the region called Brazil. There, physical space is activated in a different way. One sees this, for example, in Oiticica, Lygia Clark, Soto, and Sérgio de Camargo, among others. I believe that when physical experience comes into play, one finds that emotions, feelings, and physicality are also forms of thinking. When this kind of knowledge is included in the actual thinking program, there comes into existence a form of reasoning which is more than strict abstraction. In fact, for every theory in physics, there is an anecdote serving as the point of departure for the development of this theory, i.e. Newtons’ apple. The perception of our reason is based on physical experience, and forsees the theory which is to be built not with a natural, but with a constructed language. However, artwork with a connection to reason can come out of the sensuality of natural language. And when I see Rothko or hear Billie Holiday, I know that I’m right.

In the catalog, there is a picture of a group of men in Africa carrying the roof of a hut. The structure is very similar to my idea, as well as the afore-mentioned Caryatides, who carry a temple like a great collective hat. This idea of the hat contains a paradox: a hat is something very individual, and to transform these individuals into something collective is a challenge. Therefore it is appropriate to see, at most, a connection to Lygias’ work in the sense of an archetype, but not in the sense of a cultural inheritance of one artist from another.

I think it is a mistake to look for a genealogy in Brazilian art, just as it is a mistake to speak of "Latin American" art. Even the term "international art" is dangerous, as "inter-national" automatically implies the idea of nations. And as we know, this expression has given rise to many dictators in the world. It is necessary to practice a more general critique, and to begin to think in other perspectives.

For example: I come from an area called Brazil, and am therefore influenced by Indian, Portuguese, and African cultures, In addition, I’ve had experience with that which is called Spanish-America, because I lived in Chile during my youth. There is not just one Latin America - many areas are as un-homogenous as Brazil - but rather innumerable Latin Americas. However, when I show work in the USA or in Europe, mainly in Europe, most people say that the majority of works from Latin America are fantasies in search of a single identity. It fails to be understood that I have no need for such an identity, that these people aren’t looking for an identity. Identity is a European problem.

Upcoming Projects / About the Concept of the documenta X

I’m in the middle of preparations for my exhibition at Bard College in New York, a sort-of retrospective on my last 20 years. That frightened me at first, since I’m only in my mid-40’s now. But this kind of overview actually corresponds to my entire vision, because I see my work more as a program in which one piece supports a further one. An old piece is seen differently through a newer one.

That is, I think, also an idea which is part of Catherine David’s concept. She shows these historical exhibitions, which unfortunately are trapped in the German museal structure which doesn’t allow, for example, people to touch the works by Lygia Clark or Hélio Oiticica, something that is part of the works’ originality. Nevertheless, she shows that the paradigm of contemporary art no longer stems from a critique of the Modern, as was the case with Postmodernism. Instead, what is occurring now is a new and positive way of seeing the potential of Modernity, allowing for new possibilities.The exhibition may not be as strong on the visual level, but it indicates a very clear intellectual direction. When dealing with Lygia Clark, Oiticica, Matta Clark, Baumgarten and others, the exhibition marks an attitude toward the program of Modernity.This serves to put it into perspective, and not simply to criticize it or to muddy the style with the technological capabilities of computers. It re-thinks the discontinuity of the world in the context of a new reality which is no longer that of only Europe and North America. It is something much more encompassing, by which I don’t mean globalisation. This is what appears to me, from the small part of the documenta that I have seen, to be very positive and to correspond with my own convictions.

© Text and photos: Binder & Haupt, Universes in Universe.
Edited after an interview with Tunga in Spanish, on 27th June 1997.
Translation from the German version: Holly Austin