Luis Camnitzer about his works at documenta 11, 2002

In an interview with Gerhard Haupt & Pat Binder, the artist talks about his "Uruguayan Torture Series" and his installation especially created for documenta. 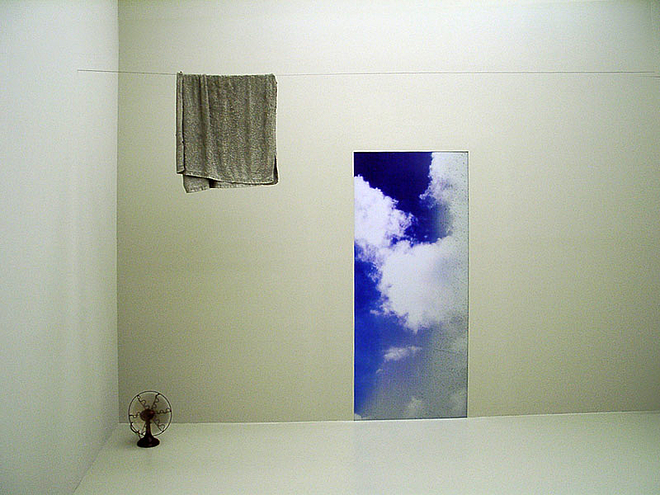 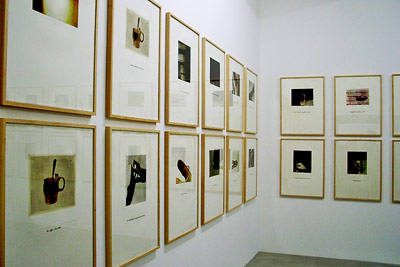 Gerhard Haupt & Pat Binder: What do you think is especially important for understanding the context of your works in documenta 11?

Luis Camnitzer: In addition to a new work, the curators asked me for the "Uruguayan Torture Series" from 1983 as, let's say, an historical component. 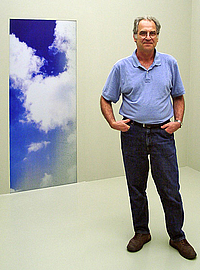 The installation was created especially for the documenta, and is part of a series of installations, like the ones for the Venice Biennale in 1988 or for the Biennale São Paulo in 1996, which are about the ambiguity of prison. On the one hand, I refer to the physical prison, especially that of the political prisoner who dreams in order to escape and fails. On the other hand, it is an allusion to the imprisonment of the artist who wants to break out of conventions, stereotypes, cultural constraints, who tries to be original, to break the rules. Victim of his own hallucination - which is what art is -, he too fails in the end. It's not so important to me how the work is viewed, be it in the one sense or the other. Okwui Enwezor wanted the audience to enter through the torture series before coming to the new installation, in order to put it into context.

Haupt & Binder: Does this allusion to the conflict and the destiny of the artist have autobiographical aspects?

Luis Camnitzer: Yes, in a certain way that is how I feel, though this may sound very depressing. But in the end everything is a prison: the body, the limits of intelligence and imagination, the limits of society. It's like an onion: layers and layers of imprisonment. There is no way to completely free yourself, unless you become a Buddhist or something, but I'm not to that point yet.

The real prison is basically a physical example of an infinite number of prisons. It's like an accidental anecdote. We are always carrying around a prison, wearing it like a suit. 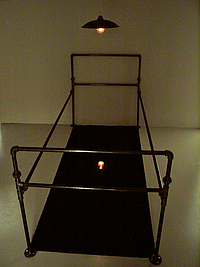 With respect to my work, what began with the subject of torture had a specific point of reference, and in a certain way it was a tribute to friends of mine who I knew had been tortured, evolved into a more general vision. I was always of the opinion that, the better one knows the limits, the more possibilities one has to confront them and to act, if not with freedom, then at least with resistance. This is why I am continuing in this vein, not out of cynicism or an apocalyptic view, but rather to find out where the borderlines are.

Haupt & Binder: The ablilty to escape from prison using the imagination; isn't that what constitutes the freedom of the artist?

Luis Camnitzer: Yes, if only it worked. But that is over at the point where imagination ends again and again: in commercialization, locked up in the new prison given by the confinement into an object.

Haupt & Binder: But what about the moment of creation itself, of intent, of striving for transcendence... ?

Luis Camnitzer: For me, the work of art lives for a total of 15 seconds. As soon as I look at my own work for the first time it becomes an object and dies. The big question is always: do we as artists make culture, or do we produce merchandise? For my part, I want to produce culture, but the forces against that are so great that it always, no matter what, it ends up being merchandise-production, and that is depressing.

Haupt & Binder: That reminds us of the statements in your essay "The Art of Corruption, the Corruption in Art", which we published four years ago.

Luis Camnitzer: Yes, for me they are still valid.

Haupt & Binder: In that sense, did the specific context of the documenta play a role in your decision to show an installation with this theme?

Luis Camnitzer: First of all, I think that out of all previous documentas, this is the one that confronts such problems the most. However, I didn't see the one by Catherine David. I think she tried, but I have the impression that she didn't succeed. Enwezor's documenta - maybe thanks to the one by David - goes a step further.

But apart from this, I would still participate if this were a reactionary, institutional or mercantile event. At the end of the day all this also is about the power one acquires, and the more one exhibits, the more power one attains. That means that the more power I have, the more people see my work and hear what I have to say. This would become a negative phenomenon if I were to let myself be tempted by this power and would change the way I work, for example adjusting my art based to conform with what sells best. That would be fatal. It's all about using the corruption without becoming corrupt, which is the great dilemma, isn't it?

Haupt & Binder: In a way, this documenta is also a result of your efforts as critic, curator and educator to direct more international attention to the art of the Americas, Asia and Africa. Do you think so, too?

Luis Camnitzer: Well okay, the efforts are being made by all of us, but in a sense that is true.

I confess I was worried that this documenta might not reach the artistic level of quality required by the formalists and, let's say, the enemies. But I think that it did, it has a high niveau. My fears resulted from a more political than artistic view of this documenta. Without the appropriate level, it would have been easy to dismiss the exhibition as a sign of political correctness: bringing artists here who haven't yet had access to the event. If there weren't more to it, and after the quota is filled, the next step could have been to return to the same old hegemonic curatorial practice. But I don't think this is possible anymore. One won't be able to forget this documenta, it crossed the threshold, the boundary. Now we are all very present and we are here to stay. In this sense, it seems to me to be a great success.

© Text and photos: Binder & Haupt, Universes in Universe.
Edited after an interview with Luis Camnitzer in Spanish in June 2002.
Translation from the German version: Holly Austin