Triennale Brugge 2015: Rounding-up and looking ahead

Interview with curator Michel Dewilde about the 1st Bruges Contemporary Art and Architecture Triennial 2015, its challenges, impact, participation of the local audience, and thoughts for the next edition.

The first Bruges Contemporary Art and Architecture Triennial closed on 18 October 2015. Curated by Till-Holger Borchert and Michel Dewilde, fourteen large-scale projects mainly in the public space of Old-Bruges, as well as three thematical exhibitions, brought together artists and architects from different countries to reflect on topics such as the future and the creative potential of cities, urbanization, citizenship, community, social aspects and economics.

In this interview, we asked Michel Dewilde for a critical summary about the work on this Triennial, its impact and acceptance by the local audience, as well as conclusions for the next edition:

Pat Binder & Gerhard Haupt: In this first edition of the Bruges Triennial, the city itself is the protagonist of the event, with the main artworks in the public space. What were the greatest challenges for their realization and placement?

Michel Dewilde: Concerning the realization and placement I saw basically two challenges: the first test was a practical one, i.e. getting all the projects ready for the opening which was tied to the specific legal status of public space in Bruges. Here we had a city which is, due to its historical status, preserved and protected to a very high degree on a local, national and international level. In that respect each chosen location and the artist's proposal, had to be submitted to at least three different institutional levels or governments and numerous commissions. Consequently we had to await written confirmations from the different institutions or government bodies before we could actually start, or not (!) with the realization and placement. On top of that several projects evolved during the first conceptual phase, so we had to send new proposals in order to obtain the necessary permits, licenses, which led to new delays, etc.

The second test for me was related to more esthetic and historical dimensions. I refer to the rich story of site-specific public space projects, this time set within the context of a city-scape which is first and foremost ‘consumed for its visual qualities, for its setting’. Furthermore, I remembered the debates of the early nineties, where similar public space projects were often related to forms of city marketing, and which sometimes evolved into predictable exhibition formats. It’s not surprising that some of those involved in the organization of the Triennial wondered if we should place anything at all in public space except maybe only very small, nearly invisible artistic accents. These questions led in the end to efforts to increase attention to the actual placement of the works, their relation to the site.

Binder & Haupt: How was your personal approach or crucial questioning regarding the inquiry of what could such a museum-city like Bruges contribute to the larger debate of urbanization in the global context?

M. Dewilde: The more the project advanced, the more I tried to focus on the uneasy relation between the imaginary dimension of any form of urbanization and the imagined condition of present day Bruges. Here we were operating within an urban environment, which is not perceived as being an example of the current or future polis, but is on the contrary seen as a definition of an imagined, fabled or desired past. In this place, the urban was translated into a medieval appearance, a cloaking device conceived in the 19th century. As most of the 21st century humans are city-dwellers and builders, what would they do in an urban context where their dreaming, longing, experimenting was already filled in? How to think beyond that model, when you embody or live inside the model, can one un-think the model? During these reflections the difficulty remained not to fall in the traps of either a simplistic deconstruction of this ancient city, or being lured into a tempting admiration of this elegant reverie.

Danish architect and urbanist Jan Gehl, one of the key thinkers linked to the Bruges Triennial, certainly pointed in his books, dealing with the need for cities on a human scale, towards the merits of ancient and medieval cities. In the end, I hoped that we could try to re-imagine the urban, both on a local and international level, through cutting edge temporary interventions set on an urban stage apparently devoid of traces of the modern or contemporary. The city seen as a play, with itself as central protagonist and operating as a looking device, searching for new shapes, new forms for a democratic living together.

Binder & Haupt: A biennial or triennial is made for an international and for a local audience but mainly an event like this has to take care of its local audience. How was the response of the people?

M. Dewilde: Looking back now, and looking beyond the high number of visitors, we can say that the exhibition really reached out to the local population without ever becoming populistic. I think we touched them. An exhibition such as a triennial remains in essence, a top-down project, often conceived for a group of peers, believers. Organizers thus run the risk to alienate the local population, so from the start we wanted to combine this exhibition with bottom-up projects, dealing with related subjects and initiated by the citizens and participants. The aim was not so much to increase participation of the local audience to the exhibition but to translate, to connect, to gather. In this sense the exhibition was just one of the many texts, many projects dealing with the same subject matter. Before the Triennial and its themes were openly communicated, we went to the schools, the academies, different social groups, companies, and even towards individuals, asking them what they wanted, what they desired, for their city, for their daily life. A fine example is our collaboration with the organization ‘The Future of Bruges’ which combined their programs with ours. I believe that this is one of the reasons of the local success: it became their project.

Binder & Haupt: Was it possible to make the connection to the Triennials in Bruges, held in the 1960s and 70s?

M. Dewilde: This proved a necessary but difficult undertaking. Bruges is, certainly in Belgium, rarely perceived as a location of the modern or the contemporary. But it had between the fifties and early seventies a number of valuable artistic projects such as the Triennials (1968-1974), a history which should be shown to a wider public. I guess the main difficulty resided on a conceptual and exhibition level: how could we combine a historical, archival project of past exhibitions with a new Triennial? This was further complicated by the fact that the current Triennial is basically a site specific and themed public space project, and on the other hand, the historical Triennials were in essence surveys of the Belgian contemporary art scene. In that respect we chose for a limited archival presentation and a documentary. In the present Triennial, we included this exhibition in one of the indoor spaces, actually combining the three historical Triennials with a short analysis of its predecessor, the private art foundation Raaklijn of the 1950s.

Binder & Haupt: The Triennial proposed as premise to think of what would happen if the five million people who yearly visit the city all suddenly decided to stay. Up from July-August, a huge wave of refugees started to arrive in Europe. Did this theme and its urgency find a frame of reflection within the Bruges Triennial?

M. Dewilde: The current Triennial was developed in the first half of 2013, before the latest waves of refugees. Still one of the central ideas of the Triennial, "new citizenship," deals with some aspects of the refugee crisis. Certainly the work of Daniël Dewaele included in the Triennial, deals with the pressing matter of the new citizens. As I am convinced that this new surge of exiles is just the beginning of a larger global migration, this theme will undoubtedly be at the heart of new forms of urban and social thinking and play a role in coming exhibitions and triennials.

Binder & Haupt: The realization of a first edition of such a large scale event is usually a learning process. What do you think the Triennale Brugge should reconsider, or do different in the future?

M. Dewilde: The first thing which comes to my mind is setting up a structure or organization which deals solely with the conceptual development, the general coordination, communication, and realization of such a complex phenomenon. The second is the fact that we should embed the Triennial in a long term artistic vision for the city, translated into a yearly program with a range of projects.

Binder & Haupt: A time lapse of three years for a next edition is a very long time in our accelerated world, are there thoughts about doing any related activities or events in-between?

M. Dewilde: I endorse this point of view, and advocate a full program of related shows, presentations, lectures, creating the right context which will eventually lead towards the next edition.

Binder & Haupt: Any advance information about the 2nd edition?

M. Dewilde: Several meetings were held in August this year, but it’s too early to confirm anything yet. Let’s just say that during these brainstorm sessions a possible theoretical framework with a central theme was put forward, related to the work of some key thinkers. If this framework would be accepted, then it would continue and even expand the present concept. Probably it would reach beyond the more abstract or poetic approach of the current edition, and focus on one or more models of thought, translating it into a number of related actions. Desiring and longing again.

For the complete documentation of the Triennale, with information, photos and videos, please see:
>> UiU Special: Triennale Brugge 2015 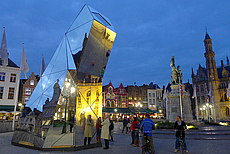