Instead of death a Saudi Arabian court condemned the poet and artist to a lengthy imprisonment and flogging. Continued campaign for his release

A Saudi Arabian court has overturned the death penalty for Palestinian poet and artist Ashraf Fayadh. The panel of judges downgrades punishment for apostasy conviction to eight years in prison and 800 lashes to be carried out on 16 occasions. He must also renounce his poetry on Saudi state media.

According to The Guardian, the Middle East researcher at Human Rights Watch, Adam Coogle, said: "Instead of beheading Ashraf Fayadh, a Saudi court has ordered a lengthy imprisonment and flogging. No one should face arrest for peacefully expressing opinions, much less corporal punishment and prison. Saudi justice officials must urgently intervene to vacate this unjust sentence."

More than 60 international arts and human rights groups, including Amnesty International and the writers’ association PEN International, have launched a campaign calling on the Saudi authorities and western governments to save him. Readings of his poetry in support of his case took place in 44 countries, on 14 January 2016.

Jo Glanville, the director of English PEN, said: “It is a relief that Ashraf Fayadh no longer faces execution, but this is a wholly disproportionate and shocking sentence. It will cause dismay around the world for all Ashraf’s many supporters. The charges against him should have been dropped and he should be a free man today. We will continue to campaign for his release.”

Save Ashraf Fayadh: Urgent Appeal
The artist and poet has been sentenced to death in Saudi Arabia. Act urgently - Help to save his life!
>> Proposal for a letter and addresses

While at the United Nations Headquarters in New York takes place an art event (16 - 27 Nov.) of Art Jameel, in partnership with Edge of Arabia (EOA) and the Permanent Mission of Saudi Arabia to the UN [1], EOA's former member Ashraf Fayadh has been sentenced to death by a Court in Saudi Arabia.

As Human Rights Watch states, Ashraf Fayadh was sentenced to death on November 17, 2015, for alleged blasphemous statements during a discussion group and in a book of his poetry (from 2008) [2]. The Court reverses earlier ruling of 4 years and 800 lashes. Fayadh denies the charges and claims that a man made false accusations to the country’s religious police following a personal dispute, what has been confirmed by three witnesses contesting the testimony of that man. Fayadh has 30 days to file his appeal (counting up from 17 November). [3]

Ashraf Fayadh is an artist and poet who respects and honours the culture and civilization of Saudi Arabia. His poems inspire readers to reflect on issues related to the spirit and life. His commitment as artist and curator supports and helps the creative talent of young artists in Saudi Arabia, contributing to make their talent and achievements known in the country and abroad.

With this goal, Fayadh co-curated the exhibition Rhizoma (Works by a younger generation of Saudi Arabian artists) at the Venice Biennale 2013, together with Sara Raza (currently Guggenheim UBS MAP Curator for the Middle East and North Africa), organized by Edge of Arabia, and supported by Art Jameel. [4]

Earlier in 2013, Ashraf Fayadh curated the exhibition titled Mostly Visible (24 artists from Saudi Arabia) as part of the Jeddah Art Week in Saudi Arabia. On this occasion, we were in touch with him via email, publishing a feature on the show, for which he wrote a statement. Fayadh stressed that the goal of this exhibition was to highlight "the real side of how art can be, simple, authentic, with little funding and lots of self-effort, with the soul of team work, inspired by our own culture, our own lifestyle, issues and concerns, and raising the level of awareness of our society by drawing the attention to the social, popular, and genuine culture." [5] The exhibition Mostly Visible was very successful and got a lot of attention, nationally and internationally. It was featured by Saudi TV, and visited and praised by international personalities, such as Chris Dercon, at that time director of the Tate Modern in London. [6]

Contribute to save the life of Ashraf Fayadh by sending letters of appeal to the King and other authorities and the embassies of Saudi Arabia!

>> Proposal for a letter and addresses

Ashraf Fayadh was sentenced to death on November 17, 2015, for alleged blasphemous statements during a discussion group and in a book of his poetry (from 2008)

At the beginning of February 2016 the death sentence was overturned, and the Court in Saudi Arabia condemned the poet and artist to a lengthy imprisonment and flogging.

Continued campaign for his release. 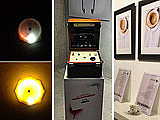 About the exhibition in Jeddah, initiated and self-organized by artists from Saudi Arabia, in collaboration with Athr Gallery.