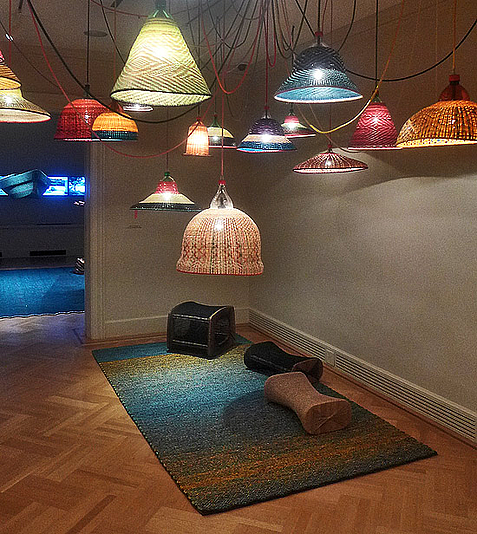 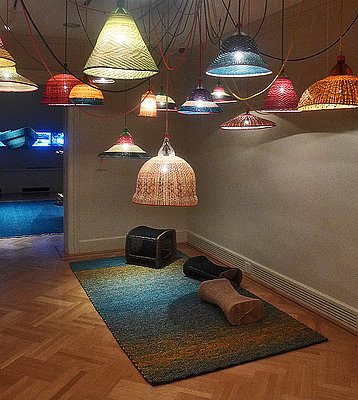 PET Lamp project. 2013
Recycled plastic, metal, paja de tetera fiber, wool
A group of lamps from the PET Lamp (2013) project hang from the ceiling of this space. PET Lamp grew out of an initiative of Spanish designer Alvaro Catalán de Ocón, who was invited to Colombia to provide a model for recycling the plastic bottles that pollute rivers worldwide. Relying on weaving techniques and patterns traditionally used by the indigenous Guambiano and Eperara Siapidara communities to create baskets and textiles, Catalán devised a system whereby discarded bottles are slit vertically and the resulting threads are woven into unique lamps, extending the use cycle of these ubiquitous objects by linking them to tradition.

Made by artisans from Curití, Colombia.
Stools from the Out of Balance project, 2010–11
Guadua bamboo, sisal fiber
Lucy Salamanca is a Colombian designer based in Italy whose involvement in several rural communities in Colombia has helped to preserve and develop local craft techniques. Working worldwide for fair trade and sustainable design, Salamanca is committed to promoting ethical pricing, wages, and environmental practices. She goes beyond formal design by working with communities, such as artisans in Curití in northeast Colombia, to establish sustainable business models for craft production, as seen in the guadua bamboo and sisal fiber furniture shown here. Visitors are encouraged to sit on the stools from the Out of Balance project (2010 - 2011).