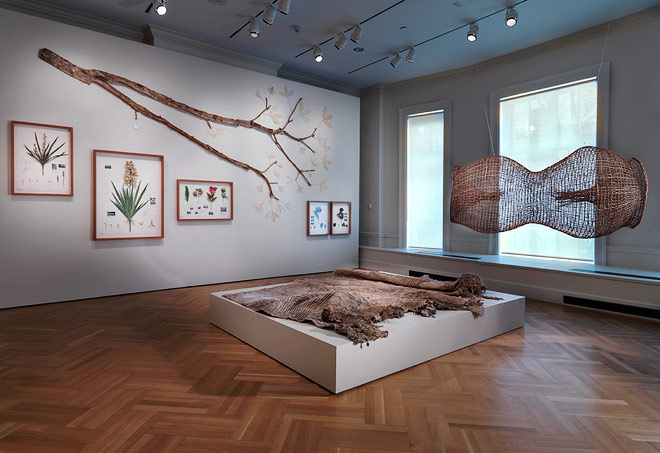 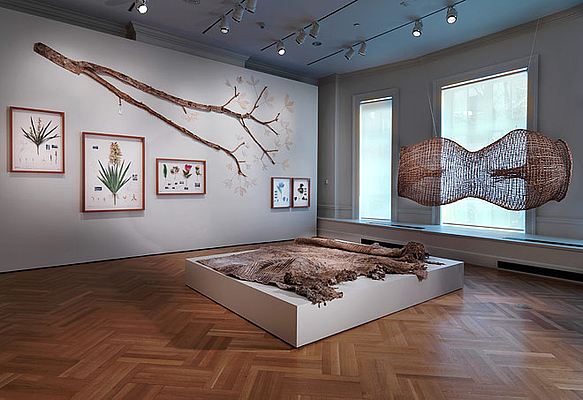 Hanging on opposite walls are two groups of "botanical plates." Alberto Baraya gathers artificial flowers and plants from all over the world and then classifies them in the manner of a botanist. His most recent collecting "expedition" was conducted in New York. Abel Rodriguez, a member of the Nonuya people of the Caquetá River region, produced meticulously detailed drawings in collaboration with Tropenbos International, a Dutch NGO concerned with the preservation of tropical ecosystems worldwide. His series depicts the monthly cycle of the flooded rainforest, and the large drawing features a tree—a symbol of the origin of life for many Amazonian peoples.

The two works in the center suggest contrasting interpretations of nature. Rodríguez’s "fish trap,"captures the beauty of natural materials and evokes the functional logic of a traditional form. Baraya’s shroud-like latex cast of a tree historically tapped for rubber, made in the Amazon with the aid of former rubber tappers, conveys how the relentless search for natural resources has ravaged the country’s landscape. The tree’s scars impressed upon the latex cast recall a textile design and also suggest the scars left on Colombia’s social fabric after decades of exploitation during the rubber booms of the late-nineteenth century and the World War II era.