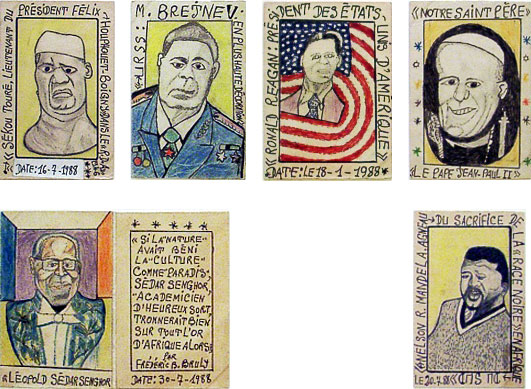 On 28 January 2014 passed away in Abidjan the artist, thinker, poet, and creator of cosmologies, Frédéric Bruly Bouabré.

Born in 1923 in Zéprégüuhé, Ivory coast, Frédéric Bruly Bouabré is famous for his astonishing drawings in postcard format, using a ballpoint pen and colour crayons. Since the 1970s he has creatred hundreds of them.

His best-known series "Connaissance du Monde" (Knowledge of the World), an encyclopedia of universal knowledge and experience, and "Alphabet Bété," an alphabet of 448 pictograms of phonetic syllables, to preserve and transmit the knowledge of the Bété people, were exhibited in 2013 at the 55th Venice Biennale's main show "The Encyclopedic Palace", curated by Massimiliano Gioni. Further works of Frédéric Bruly Bouabré were also part of the Pavilion of Ivory Coast in Venice.

In his own words: "Now that we are recognized as artists, our duty is to organize into a society, and in such a way to create a framework for discussion and exchange among those who acquire and those who create. From that could arise a felicitous world civilisation." [1]

>> A selections of photos of his works

Universes in Universe has admired and followed Frédéric Bruly Bouabré's work since many years, and featured it as part of the following exhibitions: