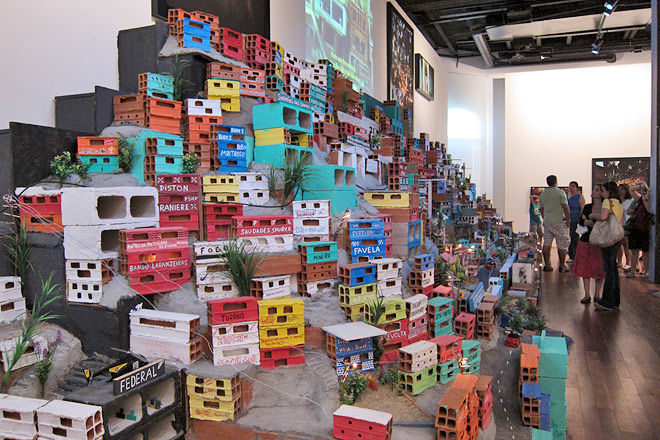 Inaugurated in March 2013, the Museu de Arte do Rio is the first cultural institution built as part of the revitalization project of Rio de Janeiro's Port District. Under the name of Porto Maravilha, the urban development initiated by Rio's Municipality acknowledges the value of the historical heritage of the region, improving the quality of life of its residents, and the area's environmental and socio-economic sustainability.

The architectural design of the Museu de Arte do Rio by Bernardes + Jacobsen, combines two existing buildings: the Palácio Dom João VI, built in 1916 in English style as the headquarters of the Inspetoria dos Portos, Rios e Canais (Inspection of Ports, Rivers and Channels); and Rio's first bus station from the 1940s, which was lowered to the height of the Palace by removing one floor. The buildings are connected by a square, a walkway, and a distinctive roof in the shape of a wave. The complex encompasses an area of 15,000 square meters and includes eight exhibition halls over four floors, the Escola do Olhar (School of Seeing), as well as technical and service areas.

The institution is headed by Carlos Gradim, as Chief Executive Officer, and Paulo Herkenhoff, as Cultural Director. As expressed in its mission statement, the MAR seeks to "develop a space where Rio de Janeiro finds and reinvents itself through knowledge about art and the experience of looking, with emphasis on forming a collection, and on education." MAR has a priority agenda for its neighbor communities, offering cultural activities in the surrounding areas, and giving neighbors free access to exhibitions and programs.

The inaugural shows give an idea of the emphasis and scope of the Museum's exhibitions' program:

Rio of Images
The representation of the city along a period of four centuries, through a selection of 400 works - from cartography to contemporary video.
The Collector: Brazilian and international art in the Boghici Collection
Jean Boghici founded one of Rio de Janeiro's first art galleries in 1961, helping to form the major Brazilian collections and bringing international artists and trends to Brazil.
Shelter and Land
First exhibition of the project Art and Society in Brazil, dedicated to artists and initiatives analyzing the forces in conflict in the urban, social, and cultural transformations that have taken place in the public/private space. Curated by Paulo Herkenhoff, and Clarissa Diniz.
Constructive Will in the Fadel Collection
The exhibition presents the steps followed by the constructive ideas set in Brazil, through individual research and collective movements, from the first approaches of the European avant-garde art in the early decades of the 20th century, to its development between 1960 and 1980, when experimentalism incorporated socio-political issues, conceptualism, and the revision of modernism. Curated by Paulo Herkenhoff, Roberto Conduru, still on view until 20 October 2013.
Individual exhibitions featured until 8 December 2013:

Berna Reale: Vazio de Nós
[Void in Us]. The artist, who is also a crime scene investigator, criticizes the injustices and social disservices that produce a geography of exclusion.
Yuri Firmeza: Turvações Estratigráficas
[Stratigraphic Turbidities]. The Ceará artist works on the archaeological remains found during the renovation of the MAR buildings, as well as debris from the port area superimposing them with his videos.