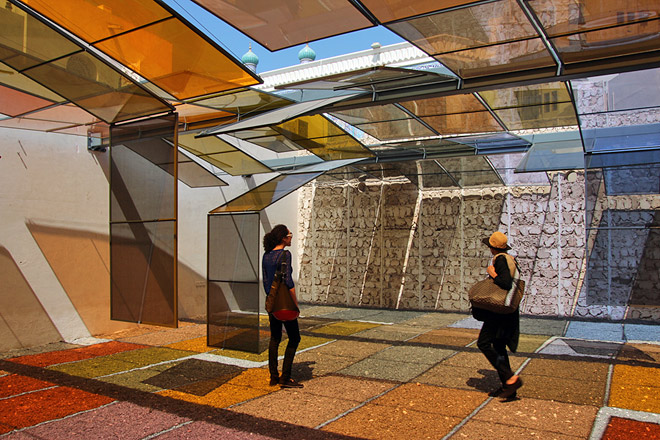 For Sharjah Biennial 11, Lúcia Koch created two new site specific installations, playing with the strong sun light. The venues are heritage buildings, located in two areas of the old part of the city.

Bait Al Hurma (or: Bait Habib Shalawani), located in Sharjah's Heritage Area, is a small house attached to a large courtyard constantly awash in sunlight, sharp and flattening. Conversion is an installation that plays with this natural source of light by covering the courtyard with a metal structure made up of pivoting panels of coloured filters.

Often used for lighting film sets, these "colour correction" filters here create cinema without film: sunlight is converted into a fragmented range of colours - from a sodium vapour light to a golden sunset, from a dark cloud shadow to a twilight-hour glow - altering visitors' experience depending on the area in which they stand, the angle of the panels above them and the time of day. At every moment, new atmospheres are created.

In a long corridor-like room at Bait Al Serkal, a beautiful three-storey heritage building from 19th century, seven doors opening onto the veranda have been replaced with coloured screens. Fashioned from a double layer of transparent coloured Plexiglas, they are cut with patterns inspired by elements of domestic architecture in the United Arab Emirates and Brazil. The screens open the room to air and light, creating a flow between spaces and allowing people to see and hear each other, whether within or without.

In the early 1990s, Lúcia Koch began making temporary interventions in domestic spaces, a practice that she would later extend into art institutions. That same decade, she worked as a member of the collective Arte Construtora, which was active in the Brazilian cities of São Paulo, Porto Alegre and Rio de Janeiro, occupying houses, parks and even an island. Koch explores the ambient light of spaces, covering facades, skylights and windows with perforated surfaces, translucent materials and cinematographic filters.

Her work has been featured in exhibitions across Brazil and internationally, including at the Aichi Triennale, Nagoya, Japan (2012); Biennale de Lyon, France (2011) Biennial of the Americas, Denver, Colorado, USA (2010); São Paulo Bienal (2006); Goteborg International Biennial, Sweden (2005); and the Istanbul Biennial, Turkey (2003).

© Based on the text in the catalog of Sharjah Biennial 11, 2013. Re-published with permission of the Sharjah Art Foundation.
© Photos: Haupt & Binder
11 image pages, more info