The South as point of reference

The Montevideo Biennial is a positive cultural bet which leaves valuable results in the Uruguayan capital.

As predictable, the first days of the Montevideo Biennial came along with great movement of audience in the different sites where it takes place. This art exhibition, the first of its kind to take place in the city of Montevideo, will have its doors open until March 30th, 2013. It promises to be the greatest international exhibition of contemporary art in the history of Uruguay.

Until the 1980's there only existed four international events in the world of art: the Documenta of Kassel (produced every five years since 1955), and the biennials of Venice (the oldest one, inaugurated in 1895), the one of São Paulo (1951) and the one of Sydney (1973). These great events allowed some of the main proposals of art of the whole world to concentrate in only one place, even if their look had a clear preference for the art of the central countries. The art of the emerging countries was literally put aside. This changed in 1984 with the appearance of the Havana Biennial, which inverted the look: it put the centre in the periphery. Since the 1990's the biennials have multiplied so much that they are hundreds in the entire world. Few are the countries that don' t count with a biennial of contemporary art, among them Argentina and, until 15 days ago, Uruguay. Now, with the inauguration of the Montevideo Biennial, Uruguay adds up to the international circuit.

The Montevideo Biennial is done to match the sphere in which it is produced. It is not pretentious: it has known how to make a strength out of the modesty of means. The curator is German Alfons Hug, with a broad career in this field. He was accompanied by two co-curators: Chilean Paz Guevara and Uruguayan Patricia Bentancur. 51 artists from all the world were invited under the motto "The Great South". The Biennial takes place in four spaces. The main one is the Great Hall of the Bank of the Oriental Republic of Uruguay (BROU), a magnificent building covered with marble and granite and designed in 1938 by Italian Giovanni Veltroni. Maybe the sphere is not ideal since it looks too impressive and some works seem diminished in the wide space of the hall, which also has a spectacular ceiling.

The other three spaces are: the Annex of the BROU (dedicated to video-art), the Church of Saint Francis of Assisi (which contains two of the most poetic installations of the whole biennial) and the Atarazana building, which was the first arsenal of the city and presents work related to the history, the conquest and the colonization.

Many of the exhibited works are site specific: they were made thinking of the place where they would take place. Some of them take the topic of the bank, money or the history of the place. Others are inspired by Montevideo or Uruguayan history. Also, there are several works that think the South from other spaces, either regarding geography (Australia or Polynesia) or culture (Africa, Middle East, India). European artists think the South, at the same time as artists from the South think the dialogue with the North (and also, with the relationship East-West).

Almost all the works that can be seen in this biennial have a clear poetic imprint: there are no clear and lineal narratives, but conceptual condensations that appeal to the ambiguous, the open, the multiple. Without resigning to allude to political matters or social problems, the works are never shut in the obvious. The film "Brick Sellers of Kabul" (2006) of Afghan Lidia Abdul (1973) is a work of a moving metaphorical density. During six minutes the images show small children carrying one or two bricks (which they got from the ruins of buildings destroyed during the endless war their country lives through). That long line of children giving bricks to a buyer that gives them, in exchange, a bill, is almost surreal. Economy, history, politics, denunciation, beauty, horror, dream, tale: all at the same time.

The installation of Portuguese Gabriela Albergaria (1965) consists in the construction of a tree composed by the assembling of parts of all the trees that there are in Uruguay, either the native or the foreign species which have acclimatized. It is an imposing and beautiful work that gets a little lost in the giant dimensions of the BROU's hall. Bolivian Sonia Falcone (1965) presents an installation of several bowls which contain spices of all kinds and colours. It is a very sensual work: not only for its vibrant colours and the texture of the different spices, but because it exudes a heady aroma. This work is exhibited at Saint Francis of Assisi Church, together with the sonorous installation of Brazilian Paulo Vivacqua. The gathering of both pieces in this space is one of the great assembling achievements of this biennial.

The other great assembling achievement is the gathering of all the videos in the BROU's Annex building. There they are shown one next to the other, creating a continuum of blinking images, which surprisingly, does not result invasive. That technical (and poetical) merit allowed the creation of a space in almost total obscurity giving all leadership to the screens, which at the same time, received a special treatment. In this same Annex there are, in the basements, two of the most simple and at the same time more evocative works: both work with the light and have a minimalist look, but, while German Kitty Krauss (1976) tends to the kinetic, the work "Smokers Room" of Argentine Eduardo Basualdo (1977), is a conceptual prodigy. From a lamp that balances striking the glass wall which divides the space and creates "the smokers room", Basualdo puts us in a limit situation and in the border between two spaces and events. There is something dramatic (in the theatrical sense of the word) in his work: the imminence of something unknown is announced.

Another of the most effective works is the installation "The Cabinet of the Machines of Capital" of US Mark Dion (1961). With materials of the BROU's archive, Dion assembled an enormous installation, which occupies a whole wall on the side of the Central Hall of the bank. The accumulation of equipment of different times is a staging of the history of the handling of money in a bank. And, at the same time, it is a geometrical image that refers back to constructivism of Joaquin Torres Garcia, the great artist of modern Uruguay.

Martin Sastre's video is a pop masterpiece. In two minutes it sums up all the topics of contemporary art, the relationship with politics and the space of the bank. It is the first part of a developing work, which will continue with the production of the perfume it announces.

The Montevideo Biennial is a positive cultural bet which leaves valuable results in this city: it will allow the enlargement of contemporary art's audience, since it gives massive visibility to a kind of aesthetic production which is wont to be reserved to specialists. It is a great achievement for a magnificent city. The Biennial will be open the whole summer. If crossing the river, it would be unjustifiable to miss it. 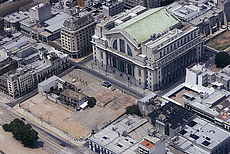 Information and photos of the Montevideo Biennial and its different editions, presented by Universes in Universe - Worlds of Art.