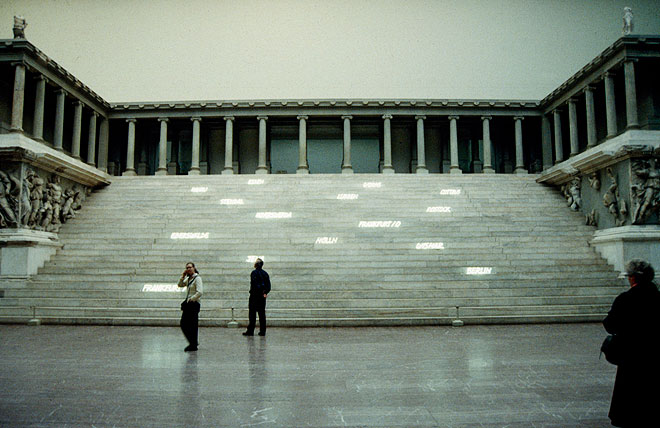 Art installation at the Altar Room of the Pergamon Museum

Alfredo Jaar came to Berlin in summer 1990 at the invitation of the DAAD (German Academic Exchange Service) Artists-in-Berlin-Program for a one-year fellowship. There and also later, he created a series of works dealing with the political situation in Germany.

The climax of this involvement was the installation The Aesthetics of Resistance in the Altar Room of the Pergamon Museum. Like a temporary memorial, Jaar installed on the staircase of Pergamon Altar in neon lettering the names of fifteen Germany cities in which in 1992 there had been attacks on homes for asylum-seekers or where immigrants had been assaulted.

The reference to these aggressive acts was duplicated and intensified in the form of a photographic installation on the wall across from the altar. Into the windowcases Jaar fitted black-and-white photos: Details of violent scenes from the Pergamon frieze along with lace up boots of right-wing skinheads and SS runes shaved in croppy hair.

Additionally, an information sheet published for the art project listed more than thirty violent acts against foreigners that had all taken place in 1992 in Germany.

The title and location of the intervention correspond directly to one another: the text from Peter Weiss’s book The Aesthetics of Resistance, in which the altar together with the frieze is interpreted as a manifestation of the subjugation of a disenfranchised class, inspired Jaar to transform the site into a place for his own, newest thematic use of violence, power, and repression and to thus reframe all kinds of terror and its long-term repercussions in a universal allegory.

(Compiled from a text by Michaela Richter published in the catalogue book of the exhibition "Alfredo Jaar - The way it is", NGBK RealismusStudio, Berlin 2012.
© Photos: Haupt & Binder)