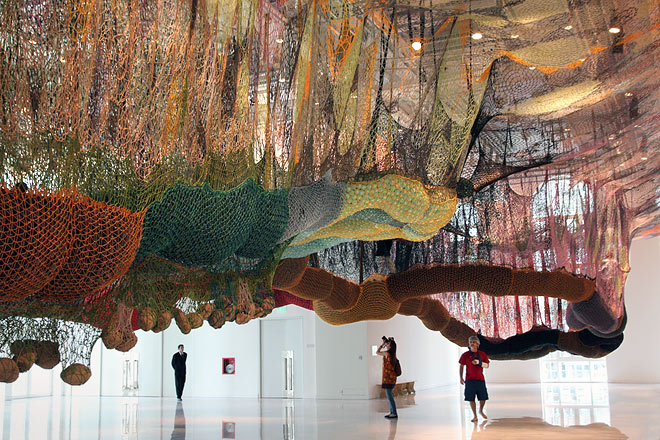 Born in 1964 in Rio de Janeiro, where he lives and works, Neto is one of the most important figures in the current Brazilian art scene. He is the heir to the Brazilian art movement known as Neo-Concreto, which for the first time places the spectator at the centre of the creative action, thereby converting physical interaction into a key aspect of his work.

The spectator is invited to touch, smell and enter the space created. The organic forms of his work are related to the observation of the body as a representation of an internal landscape and give an impression of fragility and sensuality.

His production is situated somewhere between sculpture and installation. Neto works with abstract installations which often take up the whole expositional space, creating spatial labyrinths in which fine membranes –stretched taught and fixed at various points– containing spices of varying colours and aromas (saffron, cloves) hang down here and there in the shape of enormous droplets. The main elements and materials used in his works are the elasticity of the fabrics, the force of gravity, spices and polythene foam.

The installation "O Bicho Suspenso na Paisajem" (Bug suspended in landscape) is made of colored ropes, crochet technique, plastic balls, stones. It can be visited and experienced until 8 January 2012.

>> See the photos of the exhibition

Located in what was once the old machine room of an emblematic mill of the beginning of last century, the new center has been rebuilt while retaining the original heights, period details, generously proportioned windows and semicircular arches, all representative elements of early 20th century industrial construction.

The building plan and façade have succeeded in adapting a space defined by the architectural characteristics of the past to harmoniously house the daring, versatile and demanding expressions of contemporary art.

Under the direction of Ximena Caminos, it will offer a cutting-edge program of events in the city of Buenos Aires, with the participation of local and international artists. 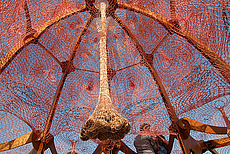 While Culture Moves Us Apart, Nature Brings Us Together, 2013. Installation in the public space in the old city of Sharjah, United Arab Emirates.