Backbone: Informal Urbanism and Utopia. A metaphor of the possibility of Latin American integration. 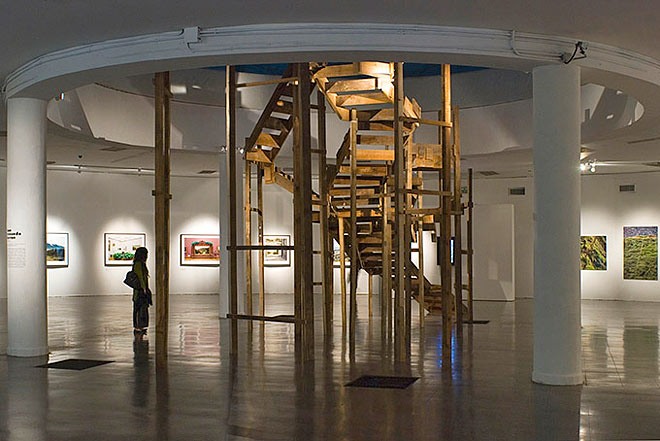 In the context of the celebration of the bicentennial of independence, Less Time Than Space is a touring exhibition that shows the works of artists who explore the Bolivarian utopia today. One of the featured projects is Espina Dorsal (Backbone), an installation made especially for the Palais de Glace in Buenos Aires by Colombian artist Juan Fernando Herrán. Espina Dorsal recreates the typical informal construction processes of the public space of the suburbs of Medellin as a metaphor for the possibility of Latin American integration.

The Escalas project served as a starting point for this installation. It began as an exploration linked to Medellin’s International Encounter of Artistic Contemporary Practices 2007. Back then, Herrán documented informal adaptations of public space in the suburbs, which in his view had a sculptural dimension. For instance, he recorded the stones used as urban furniture or the ones that were painted with the colors of the city’s soccer teams. Later, he documented the solutions found to access the hillside houses of these neighborhoods. Thus he focused on the stairs as those informal structures that successfully integrated the neighborhood with the city. The stairs are irregular because they are made by pouring concrete into rough wood forms following the topography of the terrain. Likewise, the stairs are built according to the free growth of the neighborhoods. Homeowners make their own access steps, which join the existing stairs creating a complex system of branch lines and bifurcations. On top of their sculptural value, Herrán saw the stairs as a public space resulting from the addition of different individual constructions.

Unlike Escalas, which was exhibited as a photographical series, Espina Dorsal has been conceived as a big installation in reference to those rough wood structures. There are seven formwork structures altogether that connect one another going up from the first to the second floor of the Palais de Glace through a hole between the two stores. It must be pointed out that, in order to define each formwork, the measurements of the stairs documented previously in Medellin were taken as reference. As it can be seen, Herrán extracts the information from the photographic record in order to represent a building process, an image that suspends and dilates a historical space-time and opens up to other interpretations. This could be clarified by reviewing a previous phase of the project. At that time, Herrán worked with a photograph of the celebration of the centennial of independence taken in 1910. The photograph showed a wood structure with a Colombian flag at the top that rose above the statue of Bolivar, which was used by different celebrities to crown the Liberator. During this stage, Espina Dorsal was designed as a similar structure: a wooden base holding a flagstaff. Nevertheless, there was no celebration there: no flag, no celebrities, and no Bolivar to crown either. In this way, Herrán moved away from the historical event, extracting from the picture an informal building technique and turning it into the main character of an artistic installation. The preliminary sketches and scale model at that stage showed a scene suspended in time, where one could wonder whether the structure had been abandoned more than a century ago or the celebration was about to take place.

The installation designed for the Palais de Glace works in a similar way. Instead of showing the finished stairs, Herrán refers to the building process. In this case, these are but potential stairs because the concrete has not been poured yet. Likewise, the space is ambiguous, as the construction has stopped at an intermediate stage between what is just a hill and what will be stairs. Isolated from their historical space-time, the formwork structures are presented as a metaphor of the Latin American utopia, since they speak of a dream and the possibility of fulfilling it. On the one hand, the rough wood embodies the desire of a community to actively integrate itself into society. On the other, the set of forms joined together talks about the possibility of a more complex and spontaneous level of integration between different individual initiatives that end up making up a common space of interests. Menos tiempo que lugar wonders about time compression, where things happen so quickly that they don’t have a definite place [1]. This is the question Herrán is answering, presenting a building process as a metaphor of the possibility of integration which can be achieved – in spite the difficulties faced by Latin American countries and the residents of these neighborhoods – with the resources at hand for the common good.

Part of the exhibition:

Less Time Than Space
The Art of the Independence: Contemporary Echos