Photo tour through the exhibition of contemporary art from the Philippines, presented at Osage Singapore until Feb 2009. 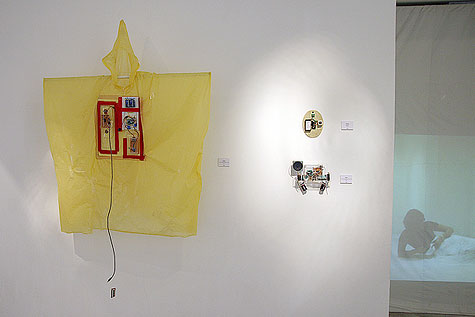 FuturaManila brought together works by 23 contemporary Filipino artists who reside and practice both in the Philippines and abroad, and are connected through artist-run spaces and exchange residency programs.

The exhibition takes its inspiration from the capital of the Philippines, and paints a picture of the developing urban society – a manifestation of the double-edge sword of globalization – as well as the changes the country is going through to accommodate these effects.

The participating artists deal with distinct and diverse issues, whether drawing from a social or personal situation. They tackle reconnections, displacement, retrospection of cultural origins, as well as the contemplation on the need to step away and break free of the tangled trappings of the country, its traditions, societal pressures and norms. It is an ironic culmination that ultimately leads to the speculation of how the future may unfold, but more significantly, also reveals the stark reality of the country’s cryptic and sinuous present.

Organizers of the exhibition were Louie Cordero, Victor Balanon, and Gary-Ross Pastrana who also participated as artists. FuturaManila was presented at Osage Hong Kong, from 5 September to 5 October 2008, and Osage Singapore from 24 October 2008 to 6 February 2009.

(From a press release of the organizers)