Sculpture Stage, Screen, and Collages. The works by Dolores Zinny and Juan Maidagan shown at the Gwangju Biennial 2008. 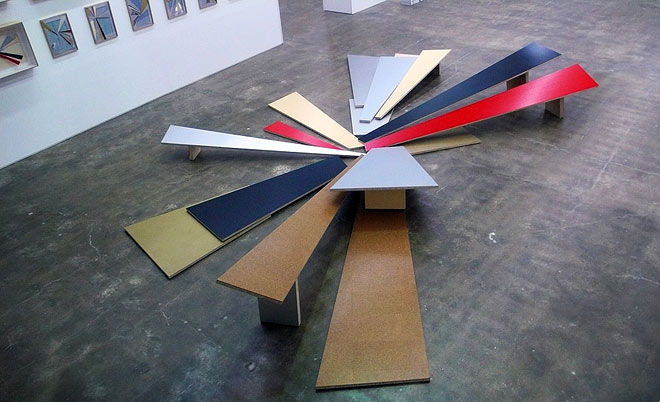 a. SCULPTURE STAGE
b. SCREEN: SPLITING FACADE
c. MODELS and COLLAGES
D for Depth / Debt
C for Confluence
SI for Simultaneous Inequity
Z for Zukunft / Future
A for Alphabet / Agglutination
M for Migration
R for Roads / Ruins
N for Nations / News / Nets
O for Occlusion
Grouped like in the previous list, the assembly exhibited by Dolores Zinny and Juan Maidagan at the 7th Gwangju Biennial consisted of a floor sculpture, a curtain and a series of models and collages.

According to Mónica Amor, "The collaborative work of Dolores Zinny and Juan Maidagan can initially be associated with a practice of site specificity that in recent years has been structurally dependent on the dynamics of globalization and dislocation. Born in Rosario, Argentina, trained there and in New York, and currently living in Berlin and traveling throughout Europe, the pair's work mode of production and circulation corresponds to that of many other artists who, when asked to produce a project for a specific space in a specific city, invariably travel there and respond, in one way or another, to the conditions of the site and/or place." [1]

Sculpture Stage
Designed as a setting for performances or other activities, it was thought as a place where different discourses that come into play in the Biennial meet and overlap. This structure in a state of permanent expansion and contraction, determines a flexible relation with the surrounding space.
Screen: Splitting Facade
It refers to the concept of facade in contemporary architecture, where it is called curtain or screen, due to its non-structural character, and to its function of projecting towards the outside an image of the building's interior.
Models and Collages
They show the different phases of the constructive process. The 4 models make evident that the exhibited floor sculpture is one among several possibilities. The open series of collages activate a framework of meaning for the sculpture: their titles correspond to the initial letter that each collage contains.
Like David Lamelas' early work, Dolores Zinny y Juan Maidagan "have productively engaged the architectural passageway to disperse the stability of their sculptural/architectural interventions and involve the viewer in a process of resignification that, again, does not deliver a transparent signified. Instead, the artistic signifier stands opaque, unstable, dysfunctional in relation to a final signified. In other words, their work depends heavily on an environmental poetics that some have associated with the pair's fascination with the literature of Jorge Luis Borges and Bioy Casares, among others." [2]