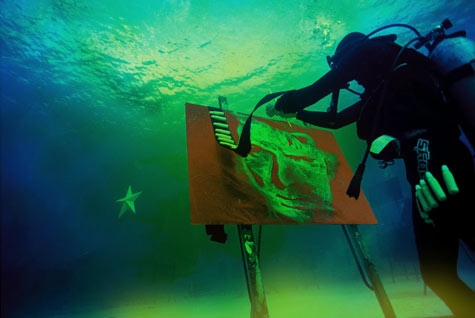 Ho! Ho! Ho! Merry Christmas: Battle of Easel Point - Memorial Project Okinawa. 2003
Single channel digital video
15 min.
The work references an American military base with strategic access to Southeast Asia. In this film, divers go underwater carrying easels and armed with paint to participate in a painting "battle." Commenting on the representation and interpretation of war, the divers in this film struggle to create portraits of Hollywood actors who starred in glamorized films about the Vietnam War, but there are no winners and the futile mission cannot be completed. (…) The film – its title imitating the typical exclamation of the American Santa Claus – on the one hand recalls the American attack on North Vietnam, which took place during the Christmas holidays, and on the other the population of the island of Okinawa, which had to suffer US occupation from the battle of Okinawa in 1945 until its return to Japan in 1972. Jun Nguyen-Hatsushiba also shot this film in the sea near the US military base.