Exhibition in London, 2008. An exploration of the complexities of economic and information exchange in Cuba. Curators: Gerardo Mosquera, Cylena Simonds 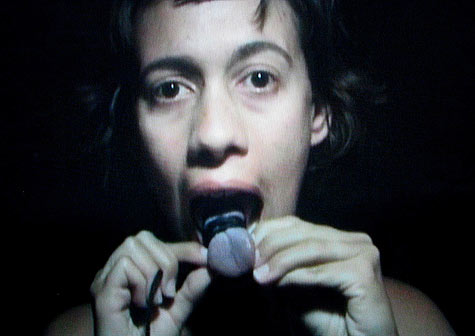 States of Exchange: Artists from Cuba, Iniva’s first major exhibition at Rivington Place, provides a dynamic and thought-provoking exploration of the complexities of economic and information exchange in contemporary Cuba.

At a time when borderless communication is assumed to be the global norm, Cuba is a country caught in flux. With two legal currencies, minimal internet access, and divisions between those who can and can't access external resources, the residents of Cuba have become experts at negotiating the complexities of exchange between each other and the world.

Curated by Cylena Simonds (Iniva) and prominent Cuban curator Gerardo Mosquera, the group show focuses on six artists living and working in Cuba today. Their work offers a witty and provocative response to scarcity and constraint, raising issues of global relevance. The artworks range from sculpture and performance to video installation, plus an extensive video screening programme featuring shorts and experimental documentaries by over 14 artists.

Co-curator, Gerardo Mosquera says: "States of Exchange aims to show how artists in Cuba discuss contradictions, ambiguities and social negotiations in Cuban life, leading a critical culture that prevails in the country since the mid 80s. They use the semantic powers of art to create complex works whose impact goes far beyond the local context. So this is not a general show of Cuban art but a thematic exhibition on issues particular to Cuba. It includes both emerging artists that are beginning to be known internationally and more established ones."

Cuba’s complex system of economic exchange is summarised in Yoan Capote’s work Dinero Bilingüe (Bilingual Money, 2002), which splices together a peso with a US quarter – rendering both coins defunct. The piece has become an iconic statement of the situation in Cuba today. In Wilfredo Prieto’s Untitled (Pea), (2001) a single pea is painted as a globe. What is striking in both of these works is the minimal and almost imperceptible way they are as objects, in contrast with the significance of the meaning that they carry. Wilfredo Prieto’s One Million Dollars (2002) humorously reflects a fantasy of unlimited wealth - creating an illusion that a single dollar is reproduced to infinity. An elusive grasp of currency is also key to the video Pasatiempo (Dinero) (Pastime (Money), 2005) by Diana Fonseca in which two peso coins suddenly vanish leaving a dark stain on the artist’s hands – her instrument of practice. The alchemical conversion of labour into value is the subject of Iván Capote’s Móvil Perpetuo (Perpetual Mobile, 2001). A vial containing the artist’s sweat produced as he filed a US quarter into metal shavings sits beside photographs documenting the process.

Themes of censorship are explored in Jeannette Chávez’s video performance, Autocensura (Self-censorship, 2006), she painfully ties thread around her tongue and closes her lips, her self-inflicted silence becoming invisible. In Secreter (2000/7) Iván and Yoan Capote collaborate to create a means to share secrets via a giant rudimentary telephone reminiscent of a handmade children’s toy. In Prieto’s installation Speech (1999) we see rolls of toilet paper made entirely from Cuba’s official newspaper, Granma.

Using red beans to represent people, Lázaro Saavedra’s video animations La gloria borra la memoria (Glory erases memory, 2006) and El que no sabe es como el que no ve (Not knowing is like not seeing, 2006) succinctly dramatise the tension between the official representations of life in Cuba and the actual experiences of Cubans. A veces prefiero callar (Sometimes I’d rather shut up, 2006) humorously dramatises the artist’s arguments with himself as he veers between the futility of art practice and his compulsion to persevere with such gestures. Iván Capote is equally dubious regarding the reliability of historical chronicles. Historia (History, 2001) is a mechanical sculpture, with a pen attached to one circling arm and an eraser attached to the other. As one arm marks the glass, the other arm all too quickly erases – suggesting lessons in history that have not been learnt.

A sense of dreaming and longing is evoked in Cambio de Estado (Change of State, 2006) in which Chávez covers a ceiling with starred military epaulettes to create constellations reflecting the night sky of the area in which the work is displayed. The vast 6 x 3 meter panel work by Yoan Capote entitled Isla (Island 2006/7) portrays the ocean that physically separates Cuba from the rest of the world and on closer inspection the waves reveal themselves to be made up of treacherous fish hooks. The US claims that thousands of Cubans attempt to cross the 145-kilometre expanse of water between Cuba and Florida each year and it has become symbolic of the dangerous and fragile links between not only Cuba and the US but also Cuba and the world.

(Text provided by the organiser)

States of Exchange
Artists from Cuba

A full-colour bilingual catalogue accompanies the exhibition.
There is also a parallel education and events programme including music, talks by the curators and discussions with artists.