About his video and photo series "El naufragio de los hombres" made by the Argentinean artist in the Uyuni Salt Flat, Bolivia. 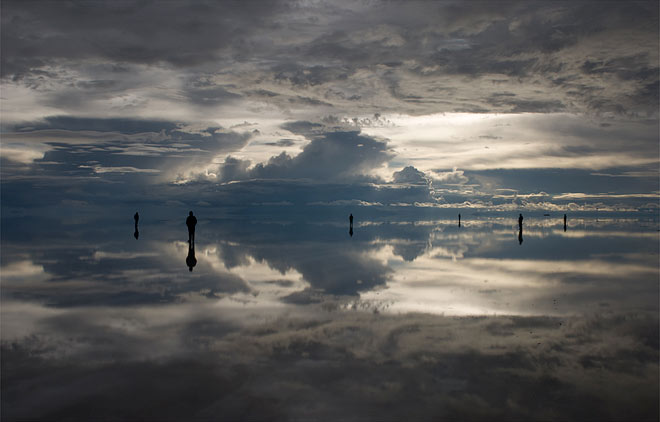 "El naufragio de los hombres" (The Wreck of Men) is a series of photographs and videos made in January 2008 in the Salar de Uyuni, Bolivia. With an area of 4,500 square miles and situated around 13,000 feet above sea level, the Salar de Uyuni is the largest salt flat in the world. Although it is one of the driest regions on Earth, during the rainy season in January and February, the land gets flooded and turns into a surreal landscape.

Because the roads are usually blocked due to the flooding rivers and streams, a Douglas DC-3 airplane of the 50s was chosen as means of transportation, able to land directly onto the salt pan, which is a risky operation since the terrain used as runway can also get flooded.

For the takes, I had the assistance of the Aymara community of the village of Colchani. The native communities of Bolivia are in a state of emergency. While different regions in the country claim their independence from the central political power, extreme poverty threatens to destroy these peoples’ cultural heritage. Salt is still a central part of the region’s economy, and the blocks of salt in the pictures are frequently used for building owing to the lack of other materials.

Due to the characteristics of my work, I refer to it as "non-fiction". The images are in the fringes of reality and the absence of any kind of digital manipulation places my ideas on a plane of political and poetic manifesto, devoid of all artifice. In keeping with this concept, there are no indications for costumes, script or behavior.

The work in the salt flat went on for 21 days. The particular weather conditions of each day defined the dramatic tone. The sound in the video was modulated from the real sounds of the environment. The cut of the sequences for the three synchronized videos of the installation do not define a narrative but a timeless consonance.

The scope of my work is based on a cosmological and existential approach. In order to capture the tensions derived from the relationship between humans and their environment, I have chosen to look for the most desolate and remote landscapes, hoping to find a poetical metaphysical answer to my own existence.

This path is an integral part of the development of my latest works: "Después del final-The Polar Project" (Beyond the End-The Polar Project), 2006/2007, is based on an action done in Upernavik Isfjord, Greenland, north of the Arctic Circle, with members of the Inuit community, drifting away on icebergs. In "La caída de un sistema" (The Fall of a System), 2005, and "Estado de Emergencia" (State of Emergency), 2004, I used takes of English ports in the North Sea and energy plants in Germany. "Viaje hacia ningún lugar" (Travel to Nowhere), 2002/2003, a journey in which things vanish as we get closer to them, was filmed in Antarctica, while "Un acto de intensidad" (An Act of Intensity), 1999, was done in the desolate region of the Atacama Plateau. These last two works were exhibited at the 50th Venice Biennale (2003).

In "El naufragio de los hombres", humans lost in the immensity of the horizon and enduring the inclemency of nature are an image of the confrontation between human fate and an indifferent universe. These beings among the clouds move away from all beliefs. Exposed to the erosion of time, they vanish into the emptiness. In silence and isolation, they are testimony of an existence which, in disappearing, becomes a declaration of principles.

Written and directed by Charly Nijensohn

In collaboration with: Teresa Pereda and Juan Pablo Ferlat
With the participation of the family Quispe Flores