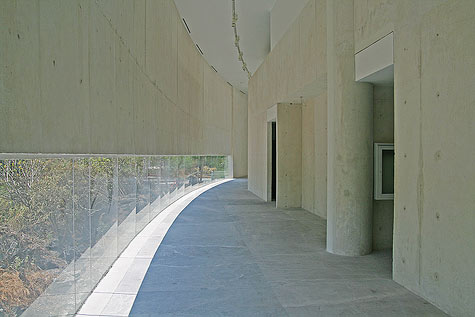 The Museo Universitario de Arte Contemporáneo (MUAC - University Museum of Contemporary Art) completes the culture complex of the National Autonomous University of Mexico (UNAM) in the south of the Mexican capital. Since 1976, various facilities for dance, theater, music, film, and literature have been established there. The MUAC is located on a large square beside the Sala Nezahualcóyotl and across from the National Library.

The spectacular building was designed by Teodoro González, one of Mexico’s most renowned architects, who also designed the Museo Rufino Tamayo. The total surface comprises almost 14,000 m2, of which 6,000 m2 are reserved for the 14 halls that are to present parts of the museum’s permanent collection and changing exhibitions. There will also be an information and media center, a conference, museography and restoration workshops, art storage, a restaurant, and more.

Since 1952, the UNAM has built up an extensive collection of contemporary art. In recent years, purchases have substantially expanded it; since 2004, this was done under the responsibility of Olivier Debroise, who died this May. The Museo Universitario de Arte Contemporáneo will not only house this collection, but also very actively carry out a number of programs that will have effects on Mexican society and the national and international art scene.

In April 2008 in the framework of the art fair FEMACO, Graciela de la Torre, the General Director for Visual Arts at the UNAM, took us on a tour of the shell construction of the MUAC. In the form of a photo tour, we would like to pass on the glimpses we were permitted of this impressive building.