The Age of Discrepancies

Art and Visual Culture in Mexico 1968-1997. Photo tour through the exhibition, currently shown in Buenos Aires. 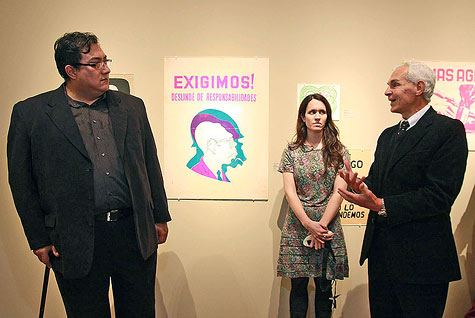 This huge exhibition was conceived for the Museo Universitario de Ciencias y Arte (MUCA Campus) of the UNAM in Mexico City, where it was presented from March to September 2007. A reduced version with about 170 works is on view from June 20 to August 11, 2008 at the Museo de Arte Latinoamericano de Buenos Aires (MALBA).

Unfortunately, we were not able to see for ourselves this extremely important exhibition – as is also the case of so many other people. So we are very happy that we can at least publish some photographic impressions of it here. This was made possible by the assistance of the MALBA and especially the photography of Kathy Binder and the intercession of Cuahtémoc Medina, one of the curators; we are very grateful.

In addition to the photos from the MALBA, we are also showing some pictures from the presentation in Mexico City that we already received last year from Olivier Debrois, also curator of the The Age of Discrepancies. We dedicate this photo tour to the memory of Olivier, who suddenly died in May 2008 and could no longer experience the presentation in Buenos Aires, to which he was eagerly looking forward.

Press release for the presentation in Mexico, 2007:

The Age of Discrepancies, Art and Visual Culture in Mexico 1968-1997 is the first exhibition to offer a historical reconstruction and critical assessment of the results of artistic experimentation in Mexico during the last three decades of the twentieth century.

The exhibition carefully analyzes the origins and emergence of artistic techniques, strategies, and modes of operation in a particularly significant period of Mexican history - the last phases of the PRI (Institutional Revolutionary Party) marked on the one hand by the Student Movement of 1968, which was brutally crushed by the Tlatelolco massacre on the 2nd October 1968, ten days before the inauguration of the XIX Olympic Games, and on the other, by the political and social crisis in the mid-1990s which culminated in the Zapatista uprising in the southern state of Chiapas in January 1994, and the social and political crisis of 1995. These two political episodes mark an exceptional period that still has not been explored in a broad and systematic manner. In this way, The Age of Discrepancies presents a revision of a decisive moment in visual history on the American continent, with the ambition of producing new points of departure for future investigations.

The Age of Discrepancies attempts to introduce a curatorial model for a future (and still non-existent) museum of contemporary Mexican art. The exhibition attempts to construct a narrative (broken up, selective and episodic, interdisciplinary and multiple) around the way different cultural waves have contributed to the recent production of art. The show is constructed layer upon layer, summing up diverse artistic fields from painting and photography to poster design, installation, performance, experimental theatre, super-8 cinema, video, music, poetry and popular culture.

Ranging from the films and ephemeral actions of “Panic” by Alejandro Jodorowsky, to the development of contemporary political photography, the participation of Mexican artists in Fluxus in the seventies and the contribution of Ulises Carrión to the artistic movement of the art book and popular rock music, the pictorial battles of the eighties and the emergence of a variant of neo-conceptual art in 1990, the exhibition will reconstruct specific moments of artistic and cultural experimentation, representative of diverse intellectual and visual tendencies which, as well as occurring simultaneously, competed as alternative models of cultural practice.

The Age of Discrepancies unfolds in various directions and on multiple curatorial levels. As a curatorial experiment, it will integrate ephemeral works, reconstructed with the support of the artists. These reconstructions will be considered as primary sources of investigation into techniques of artistic production. Finally,

The Age of Discrepancies offers a hypothetical genealogy for a Mexican art increasingly valued on a worldwide level. In fact, the exhibition seeks to give historical and intellectual depth to a class of visual experimentation that is increasingly circulated throughout the global cultural channels, providing a carefully considered contextualization for the social, political and technical developments of the latter part of the twentieth century.