Dinh Q. Lê: The Farmers and the Helicopters

The Farmers and the Helicopters. Video installation, helicopters home- made by farmers in Vietnam. 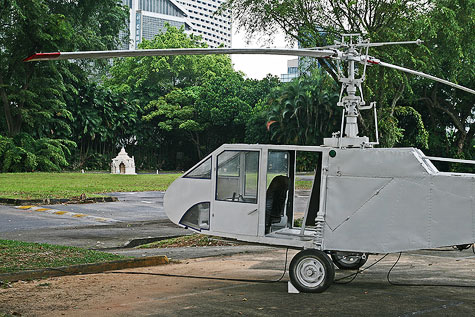 Flying dragonflies fill the screen, their sibilant sound a background to the singing before giving way to the drone of helicopters. The Farmers and the Helicopters (2006) became a video only after the object. The helicopters are the wondrous pieces for which the video has become their poetic counterpoint. Built from scratch by Le Van Danh (a farmer) and Tran Quoc Hai (a self-taught mechanic) both from Tay Ninh Province (it was here that the US military had their Combat Aviation Battalion and assault helicopter companies), the desire to build a helicopter came as a dream to ‘own’ one of the flying machines, in effect it was a wish to capture it and hold it in their hands. They have since then built three, all done using scrap material and machine remnants that abound in this part of Vietnam.

For Le and Tran – helicopters suffused their lives in ways beyond mere metaphor. In Dinh Q. Lê’s video the spectrum of memories invoked by a helicopter’s sight and sound are given full rein. We watch Vietnamese tell of ingrained personal recollections on one screen; in another, collective, public and Western ‘histories’ and memories of the war unfold through clips taken from blockbuster films (think Apocalypse Now). Those interviewed recall the fear and terror, the indecision, even placing moral judgement on the war machines. The helicopter makers, Le and Tran, however remember being captivated as young boys. For them these spinning contraptions represented other things aside from being bomb droppers. They embodied power over lives; they could destroy or they could save.

In 2003 the farmers began to build their first helicopter; it was patterned after the Bell UH-1, better known as the ‘Huey’. Neither trained, nor with any specialist knowledge, the helicopter they built is a patchwork affair. And despite the bright wash of paint, one can see the inconsistent edges of the shell, wheels that seem to have come off a small tractor, the pilot’s chair taken from a car. Indeed, parts were sourced from Tran’s repair shop and modified; the engine is a Russian truck engine standing on its head, the propeller blades are made from mixed composite. Their aspiration was to emulate the object’s presence rather than its gleaming technology. Thus, Le-Tran’s Huey is boxy, almost rectangular; it is ungainly, unbearably clunky-looking. One wonders if it ever even flew. But it has, and then they built two more. As one farmer plainly states in the video, this handcrafted aircraft has become "… a dear friend." The fulfillment of their dream acts to hone their own version of history. It is one replete with overtones of reclamation, of having the wherewithal to wrest away bias from larger stories other than their own.

The Farmers and the Helicopters. 2006
Three channel video installation. In collaboration with Ha Thuc Phu Nam and Tuan Andrew Nguyen.