Chaw Ei Thein & Rich Streitmatter- Tran about their pagoda of sugar, a metaphor for eroding optimism in Myanmar. 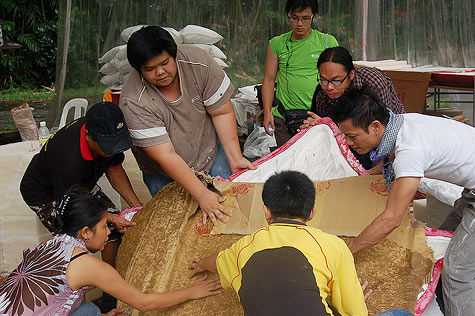 September Sweetness (2008) is a site-specific installation created for the Singapore Biennale. The pagoda structure is based upon several Burmese historical styles and is constructed from 5.5 tons of granulated sugar. The structure will erode over the duration of the exhibition, signifying the same erosion of optimism for an improved life for the people of Myanmar.

The project was conceived nearly a year ago by Burmese artist Chaw Ei Thein and Vietnamese artist Richard Streitmatter-Tran after an initial meeting with Singapore Biennale 2008 curator Joselina Cruz. For the artists, the Singapore Biennale significantly fell upon the first anniversary of the Buddhist clergy demonstration in Myanmar that was violently put down by the ruling military junta. That year, Singapore became the media’s focus as it was the then chair, and thus voice, of ASEAN, who following their normal protocol of non-interference, helped assure that nothing was done about Myanmar despite overwhelming international concern. Later that year, Myanmar was back in the news for its xenophobic resistance to international aid to its ravaged populations from cyclone Nargis. September Sweetness, for us, serves simply as a reminder of the complex interrelationships in Southeast Asia and in turn Southeast Asia’s relationship to the larger global community. It is a work that will hopefully reflect optimism even as the structure itself falls apart. Last year, we saw significant change in Zimbabwe, which some might consider Myanmar’s African counterpart. With the same international focus on Myanmar, we may see change in Asia as well.

Process
The structure required two weeks (12-hour days), 45 volunteers, 5.5 tons of sugar, 6 gas stoves, 4 electric stoves, a forklift, a crane, and a lot of faith. After consulting with a structural engineer and extensive research on ancient Southeast Asian architectures (Burmese, Cham, Khmer), we knew that it should hold together. Yet having no precedent for such a gigantic sugar structure, in the end, its final assembly was just luck. From the first few days, our site was inundated by swarms of bees. The curators were as anxious as we were and there was a lot of doubt as to whether the structure could support its own weight. Now, nearly a month later, the structure is still standing largely the way we left it. This project was our first collaboration and is certainly our most researched and labor intensive project to date. It’s a work we are very proud to have done yet one that we don’t look forward to recreating anytime soon!