Address and Flight - installations by the Filipino artists, based on collaboration and collection. 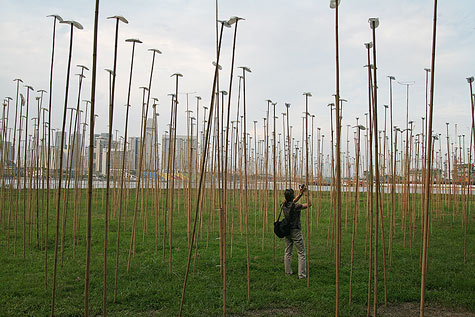 Collaboration and collection, community and family, re-location and temporary homes, memory and identity are all processes and things that feature in the work of husband and wife team, Alfredo and Isabel Aquilizan. Originally from the Philippines, they have recently moved to Brisbane with their children. As they literally live the issues they deal with in their artwork, the Aquilizans are particularly focused on conveying the complexity of emotions associated with social dislocation, which emanate from necessity or a need for change.

In Erasure and Remembrance at the 6th Havana Biennial in 1997, 10,000 used toothbrushes were collected from the inhabitants of a small town in the Philippines and densely installed. In the series of developmental works associated with Project: Be-longing from 1999 to the present, the artists began by collecting personal items from Filipinos who had migrated to Australia and in their <emphasize>Dream Blanket</emphasize> projects (2002 in Japan and South Korea and 2005 in the USA), blankets and dreams, highly personal items, were collected to create installations.

There are two important threads that bind these works and the artists’ practices. First, the process of collecting the personal items and objects necessitates a collaborative framework. The collaboration between the communities and the Aquilizans provides a platform for dialogue and an exchange of ideas and as a result, new understandings and relationships develop. Secondly, these used items and objects, with their cumulative histories and personal, physical contact with the individual users, seem to embody the experiences and lives of the people. When presented in vast numbers in the artists’ installations, an overwhelming sense of shared and varied lived human experiences are communicated. The Aquilizans are therefore engaged in a process of collecting and presentation that is informed by what they observe outside and inside their own lived experiences.

Address (2007-2008) represents a developmental process spanning more than ten years since the first personal objects were collected 'cubed' by Balikbayan boxes. These are boxes that many Filipino migrants use to transport their personal belongings home. The Aquilizans used these boxes as moulds to 'cast' their own belongings as they moved from the Philippines to Australia. These 140 'cubes' of personal belongings are now 'bricks' used in the construction of Address, a room with a door but without a ceiling.

Address was exhibited in the Gallery of South Australia in the "Handle with Care" exhibition earlier this year. Installed at South Beach Development for the Singapore Biennale 2008, Address is a powerful reminder of things transient as the building itself is earmarked for massive re-development.

At the Central Promontory Site, the Aquilizans are presenting Flight (2008) an outdoor installation of 4000 slippers, perched on bamboo poles, between the Containart Pavilion and the water. This work is based on Daing (2003), for which the artists worked with a fishing village in the Philippines to create an installation of slippers and wind harps on bamboo poles seemingly ‘returning to the sea’. Daing in Tagalog, means ‘lament’ or refers to preserved salted fish. The installation pays homage to tradition while being a fundamental activity in art-making, not only for the artists but also the fishing community.

Visual artist, lives in Singapore and Australia, exhibiting internationally (including several Biennales, and Documenta). Co-curator of the 2nd Singapore Biennale 2008.