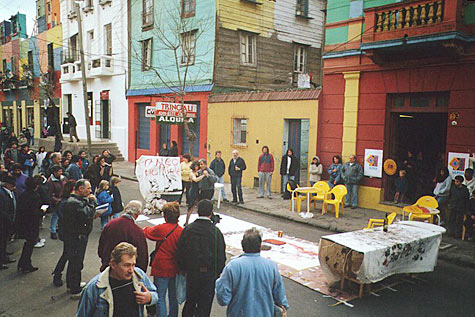 This festival of contemporary art and culture organized by the Ministry of Culture of the Government of the City of Buenos Aires since the year 2000 is a nomadic project offering the participating artists unique opportunities of dialogue with the city's topography and history. At a time the country was undergoing one of its worst crises, the festival opened artists' studios to the public, district by district, and later a series of decommissioned heritage buildings, which were resignified by artistic interventions, creating a tension between the past and the present. Former factory warehouses in San Telmo, La Boca, Palermo Viejo, and Abasto; the former Harrod's department store in Retiro; the Barolo Passage and the El Molino teahouse at Avenida de Mayo; as well as the Naval Station at the port area preceded the last and most ambitious edition in 2006: Estudio Abierto Centro, which took up four floors of the imposing former Central Post Office building, featuring more than 300 visual artists, musicians, filmmakers, actors, and theater companies in an unprecedented event.

During a visit to Buenos Aires, and later via e-mail, we were able to interview Ana María Battistozzi, director of Estudio Abierto, who also sent us the photographic material which we are publishing on these pages.

Universes in Universe: The last edition of Estudio Abierto took place in the former Central Post Office building, but previously, it was carried out in other iconic buildings of the city. What is the idea behind these choices?

Ana María Battistozzi: In most cases, they are heritage buildings that were built during the construction boom of the 19th century - which lasted till the 40s - that left their mark on the city of Buenos Aires and for different reasons fell into disuse. In those years Argentina was considered a great country. The idea of using those empty buildings and filling them with the activity and meaning of contemporary art was a way of inviting Argentinean artists - and also artists from abroad - to look for the historic marks left in each building from which to establish a dialog with the past. This was evidenced in the last edition of the festival, when we decided to organize it around the idea of "The Illusion of Modernity." The imposing building we used - conceived and designed from abroad by a French architect - was an emblem of what the Argentinean power elite considered a sign of modernity: a huge building looking to the port, with its back to the Pampas - a building that impressed our immigrant grandparents, but is now a big empty box. Some Argentinean artists worked on this story; others built installations pondering the question of space in relation with the expansion of their own work - something not encouraged by the logic of the market in this country. And then there were the artists from abroad. The Italians Paolo Bertocchi and Vanesa Cimera worked on the idea that people in Europe used to have an image of Argentina as being very grand, the so called "granary of the world", and comparing it to the image they have nowadays. In that building, the Spaniard Francisco Ruiz Infante built a very interesting installation about deterioration. This is something you feel in this country, although the situation has improved in the last few years. The question of garbage - still a source of income for the people who have been left out of the system - is something that makes a very strong impact on people coming from abroad.

UiU: How did the idea of Estudio Abierto originated? How many editions have been done?

Ana María Battistozzi: Estudio Abierto was born as a nomadic project with the intention of articulating their artists with the topography of the city. Up to now, there have been nine editions in different neighborhoods of the city of Buenos Aires. From the start, the idea was to integrate and articulate different contemporary artistic and cultural manifestations with what is genuine and typical of each neighborhood. For instance, the Abasto area is known as the neighborhood of Gardel, who was nicknamed "el morocho del Abasto" (the dark-haired guy from Abasto). This is the area were the central fruit and vegetable market of Buenos Aires operated for half a century. During the 1930s, it was a working-class area linked to the tango culture, but in the 1980s, it was chosen by several artists, such as Roberto Fernández and Marcia Schvartz, as a place to live or to have an atelier in. During the 1990s, it turned into an area of alternative theater. In its 2002 edition, Estudio Abierto integrated all that, the past and the present, into an event devoted to embrace the most significant strata of the area.

UiU: Then, what would you say is the focal point of Estudio Abierto, visiting the artists' studios or the recovery of historical buildings?

Ana María Battistozzi: In fact, it's both. At the beginning, visiting the ateliers was very appealing to the public. We started out in the area of San Telmo. Many of the most distinguished artists of Buenos Aires have - or had - their ateliers there. I'm talking about Josefina Robirosa, Carlos Gorriarena, Marcos López, RES, Alicia Carletti, Matilde Marín, Claudia Aranovich, Magdalena Jitrik, Fabián Burgos - artists of different generations who offered people diverse perspectives of present art production. In the last edition, the guided tours to the four floors of the Post Office building were a great success. Many of the visitors were people who don't normally go to museums or galleries, and don't belong to the elite of followers of the art calendar, but people who show great curiosity in productions they can understand better if the artists explain their work. To a great extent, it's a matter of being fond of what you know, whether it's the artists or the city buildings. I think that in its nine editions, Estudio Abierto has done a great job in reaching new audiences, especially in establishing as something natural several of the principles who rule contemporary art, such as the idea of expansion, the use of new technologies, and the characteristic interdisciplinary spirit of its productions.

Festival of contemporary art and culture

Theme:
The Illusion of Modernity