Art from Colombia, Latin America and elsewhere. Column by José Roca, including some other authors. Published 1998 - 2005.

Publication by José Roca. Articles, exhibition reviews and other texts on current art in Colombia, Latin America and the international art scene. Includes contributions by other authors and some discussion forums.

Between May 1998 and June 2005, José Roca published in cooperation with Universes in Universe a total of 69 Columns, many of them with images. Even though this publication didn't continue because of lack of time, it is still a rich source specially for the contemporary art of Colombia.

Roca is currently the Artistic Director of Philagrafika, a quadriennial of contemporary printmaking to be held in different venues in Philadelphia in 2010. 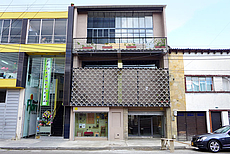 Interview with José Roca about the space and program for contemporary art he has initiated together with Adriana Hurtado.