The Artistic Director of the 2nd Johannesburg Biennale about his concept and documenta X. Written down by Pat Binder & Gerhard Haupt after an interview.

Exerpts from an interview by Pat Binder and Gerhard Haupt, publishers of Universes in Universe, with the artistic director of the 2nd Johannesburg Biennale, which took place on July 5th 1997 (that means, still during the preparation phase of the Biennale).

About the 2nd Johannesburg Biennial

With the next Biennial, we want to open up a path that is a little more heterogeneous. By this, I mean in terms of the way in which we deal with the current issues - particularly in this historically vital period - in the face of Modernity. I believe that the making of a biennale, or any exhibition of this magnitude, requires processes of critical thinking that need to be revisited constantly.

We want to avoid situations where we set up a position of a kind of fetishistic relationship between the audience and the object. In addition, we are concerned by the fact that overtly violent tones of nationalism around the world make it difficult to limit the Biennale to issues and ideas based on national representation. There is a tendency among curators and artistic directors to take the old model of seeing themselves as authors, so to speak. In order to move beyond this habit, in which we do not allow ideas and processes to be complicated, we have chosen to make Johannesburg into a different kind of forum. I decided to invite curators from different parts of the world, and my only restriction for them was that it would not be nationally-based. I want them to go beyond their own territorial proclivity. I invited Gerardo Mosquera from Cuba; Hou Hanru from China, who now lives in Paris; Yu Yeon Kim, based in Seoul and New York; Octavio Zaya from Spain, who has worked with European, Latin American and African artists and who lives in New York; Kelly Jones from the USA; and Colin Richards from South Africa, to be co-collaborators.

The aim of the exhibition section "Alternating Currents", which I prepared with Octavio Zaya, is to really look at issues that resulted from what I consider very problematic terms: postcolonialism, multiculturalism, and globalization, and to look at how local subjectivities rub against these discourses without finding definite answers, and without becoming subsumed by those particular discourses. We wanted to look at issues related to border crossings, but not border crossings in the classic sense of a celebration of hybridity. We wanted to see if people actually do cross those borders as we always believe that they have. At the edge of very extreme nationalisms, we want to explore what the role or what the situation is of being a citizen in the particular context of shifting political landscapes. We want to explore national violence, as well as the question of the national souvereign subject as presently constituted around this idea of a nation. We are not so interested in how some of these questions are set in and around themselves, but how they flow in and out of each other, often times producing quite legible disfigurations. I think that the most important thing about "Alternating Currents" is how it assumes that, in the context of globalization, there are new temporalities that enter into our frame of thinking, and it looks at how those things are taken into account.

As part of the general concept of the Biennale, we asked ourselves if, in the present situation, it´s necessary to have the biennales institutionally-based. We decided that it is not necessary, and are therefore extending the dialog beyond the confines of the institution. Therefore, even though "Alternating Currents" has about eighty artists, 20% of them are not going to be shown in any way inside of the exhibition space itself. Some of the artists have made propositions to us that would engage the entire city as a discoursive site. To make this possible, we are going to be using a lot of billboards as primary sites for artists, and there will be a series of interventions, including gardens built by artists. In Hou Hanru´s Hong Kong, etc., he will be setting up an entire video network in different locations in the city, on which the different artists are going to be shown. There will be works far from the center site of the biennale, which set up a relationship between supossedly non-artistic sites and the traditional institutions.

How do I find this year's documenta? ... This is a tough question. Let me just begin by saying that the present documenta is a tough show to love. But it is a very, very serious show, which I believe makes no concessions between the object and the audience or by playing into the mechanisms or the expectations of the marketplace.

Having said that, we in Johannesburg have other priorities, and our priorities do not in any way coincide with the ones of exhibitions like documenta. Even if Catherine David has made great attemps to break apart this incestuos relationship between the market, dealers, institutions and so on, it still remains an astonishingly Western institution and by "Western" I dont mean that in any kind of derogatory way, it simply means that it is a different kind of spacial practice that exists in that area.

From my own perspective it would be utterly naive for me to travel to China for two weeks and then to come out and say, that from what the people are doing there, only poetry is being written properly. That is why for the Johannesburg Biennale we have invited those thinkers and curators who have the ability to raise to a very high level, questions of culture that may not always be so readily apparent to many of us from different economic cultural and political contexts. What I wanted was to see how these curators and collaborators, who I respect immensely, could challenge my position. That is the way we have tried to handle it. We´ve just said: look, collaboration is a good thing. It is the way that we learn or we build bridges to different forms of knowledge that are not part of our own traditions.

Again I find that Catherine David's priorities are hard priorities and she has made a very, very wonderful show. If you have seen previous documenta or if you have seen the catalogs, this one seems a little bit different. It does remain to be seen what comes out of it. I give immense credit for convening the "100 Days /100 Guests" because it says that art exhibitions can happen alongside very critical thinking patterns, without this critical thinking becoming subsidiary to the art exhibitions. She is also proposing that if you don´t like the exhibition, you can listen to the talks; if you don´t like the talks you can read the book, you know, The Bible, if you dont like the bible, you can surf the Internet...

© Exerpts from an interview by Pat Binder and Gerhard Haupt, publishers of Universes in Universe, on 5 July 1997 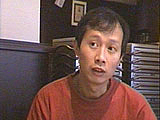 The curator of "Hong Kong, etc." at the 2nd Johannesburg Biennale about his concept. Written down by Pat Binder & Gerhard Haupt.